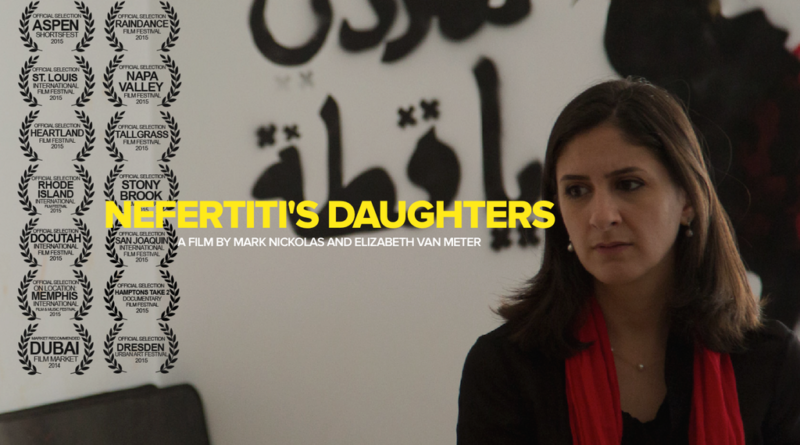 On Thursday the 20th of November, the college screened the film Nefertiti’s Daughters and held a Q&A with director Mark Nickolas. The film is a documentary chronicling the development of Egyptian street art after the 2011 Revolution. Nefertiti’s Daughters discusses the social significance of the graffiti, specifically in its empowerment of women. After the screening, over the course of the Q&A, Nickolas revealed that recent political events in Egypt have led to a dismal fate for Egyptian street art.

Nickolas prefaced the screening with a brief background on the recent events in Egypt. In January and February 2011, popular protests across Egypt led to the resignation of President Hosni Mubarak. In the course of the revolution and subsequent removal of the president, previously strict policing of graffiti fell apart and street art bloomed in Tahrir Square and on Mohamed Mahmoud St. This was expressed clearly in the documentary by Shahira Amin, a TV journalist who worked for Egypt State TV until the 10th day of popular demonstration, when she resigned in protest.

“With the revolution came this outburst of free expression,” Amin said.

After the revolution, the Supreme Council of the armed forces took power until the June 2012 election of Mohammed Morsi. After more mass protests, Morsi was removed in a coup d’etat in July of 2013.

“I shot this in Cairo last year in April. It was after the coup but before the presidential elections,” said Nickolas, providing context for the film. He refers to the May 2014 election of Abdel Fattah el-Sisi, previously head of the Egyptian Armed forces.

The focal character of the film is Bahia Shehab, a Lebanese-Egyptian artist, who, drawing from her background as an art historian, she produced an exhibit in Munich featuring a thousand historical variations of the word “no” in Arabic script. Then, driven by the protests, she began to go out into the street, spraying stencils of her “no’s” accompanied by short phrases of protest, such as “no to military rule.” Shehab explained the intent behind turning to street art.

“The street is the place you, as an artist, can reach the people directly,” she said.

Nickolas added to this point, emphasizing Egypt’s high illiteracy rates, making art an effective means of communication to the public. Included the documentary was Christiane Gruber, an Associate Professor of Islamic Art at the University of Michigan, who was able to provide analysis of the development and effect of street art from a scholarly perspective. She also pointed to the background of graffiti as protest art.

“Revolutions are begotten of the streets. The state has the tanks. The people have a different kind of armament — street art,” she said. “Street artists came out and what they began to produce was highly charged politically. Their messages were against the political regime, they were Anti-Mubarak. Many of them were also pro-female.”

The feminist side of the graffiti was portrayed by the film to be a result of the 2011 revolution, in which women took a very active role. In the turmoil of the revolution, many women protested in the streets, side by side with male protesters, achieving an equality that was withheld from them under Mubarak’s rule. The documentary featured several anecdotes recounting the unwillingness of the female protesters to back down in the face of oppression.

“You look at them, and they’re standing there, doing everything you wish you were doing,” said Nazeer, an Egyptian street artist.

Much of the pro-female graffiti is in protest of what the film described as systematic sexual violence against women orchestrated by the armed forces. A video released of a woman being beaten in the streets by military men and having her abaya torn off, revealing her bright blue bra led to the image of a blue bra becoming a symbol of pro-female, anti-sexual violence protest in Egypt, featured broadly in street art.

Another famous example of pro-female street art is the stencil of Nefertiti wearing a gas mask in Tahrir square. Much of the graffiti, especially along Mohamed Mahmoud Street drew on imagery from pharaonic Egypt, either to empower women, emphasize Egyptian identity over religious identity, or criticize dictatorial rule.

After the film screening, during the Q&A, Nickolas spoke about the lives of the film’s characters today. Amin is being charged under a new anti-terror law for reporting on the imprisonment in journalism in Egypt. The Egyptian artists have stopped making art in Egypt.

“Everyone now has to go Germany, Belgium, or somewhere else in Europe. Doing this in Egypt would be impossible,” he said. “None of them will leave the country though. They’ll leave to do their art and come back.”

He spoke about meeting with Bahia Shehab again, in the course of filming a follow-up documentary.

“She was a different person, beat down and worn out,” he said.

He continued on to explain his impression from speaking with several artists again. After the election of el-Sisi, many seemed to have lost the hope for positive change that came with the revolution. There is no longer street art in Cairo; the walls have all been whitewashed.