Arts & Features » Scream Queens: Less Than The Sum of Its Parts 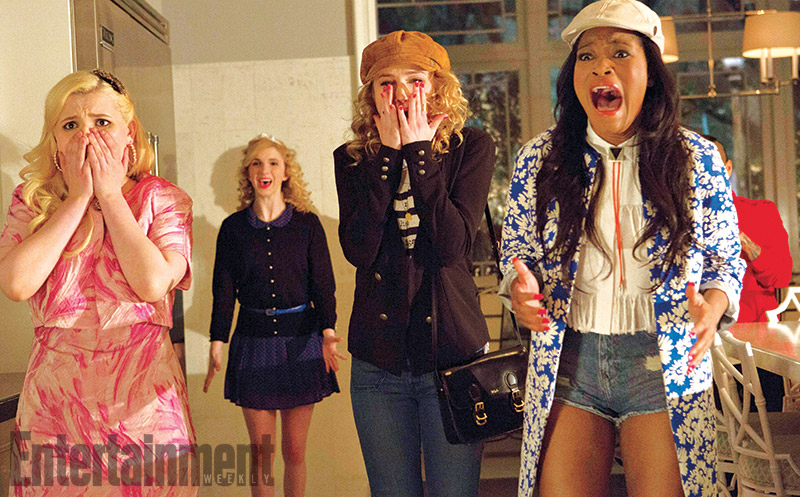 Horror is tough to do on TV, but that hasn’t stopped anyone from trying. Just a few weeks after MTV’s Scream finished its first season with a shrug, Ryan Murphy’s Scream Queens entered the scene. While Scream Queens is a flashier show, it fails to live up to even its most mediocre cinematic counterparts.

The failure of horror shows can usually be found in their formula: suspensions of disbelief that hold up for 90 minutes fall apart when sustained over twelve weeks, and while one protagonist might be enough to maintain audience interest for an hour or two, tuning in every week to watch anonymous co-eds become cannon fodder wears thin. Queens makes a noble effort at turning those weaknesses into strengths. Aiming for camp, it’s aggressively stylized and makes essentially no effort towards making its characters three-dimensional. Unfortunately, the bet doesn’t pay off. In its attempts to be larger-than-life, Queens just feels…empty.

The show opens with flashback to a 1995 Kappa Kappa Tau sorority formal, when a freshman had a baby in a bathtub and her sisters let her bleed out (in fairness, it was, like, a great party). 20 years later, university dean Cathy Munsch (Jamie Lee Curtis) is attempting to destroy the Greek system by forcing Kappa to accept any woman who wants to pledge. As Chanel Oberlin (Emma Roberts) and her minions (Chanels #2, #3, and #5) resist accepting losers to Kappa, a killer in a red devil costume begins to target the sorority.

Scream Queens is pastiche of horror classics, high school comedies, and mid-nineties nostalgia. Chanel’s band of minions bearing her name is the first of many references to Heathers, and the show’s self-aware tone owes a lot to Wes Craven’s Scream movies (the fourth of which starred Roberts herself). In the first three episodes there are scenes set to “Waterfall”, “Sunglasses at Night”, and “Backstreet’s Back”. This would be a perfect formula, but every reference feels cheaper than the last. My sudden emotional response to “Que Sera Sera” is not a reaction that Scream Queens deserves, but an approximation of the feeling I get everytime I watch Heathers. None of these homages are particularly inventive or well shot, so they feel more like imitations of great work than Murphy further developing the canon he ostensibly loves.

These constant callbacks create a dissonance between what Scream Queens is and what it wants to be. More than anything, it seems like a show made by horror fans who misremember what made their favorite movies any good in the first place. Heathers is not a great film because it features a group of mean girls getting murdered, and Scream didn’t change the game just by being self aware. Both of these movies placed already good ideas into a new framework. Heathers asked what would happen if we gave an all-powerful clique the power over life and death. Scream knew its characters had seen horror movies, but pointed out that knowing what to do in one might not be enough to save you.

The kids of Heathers and the Scream franchise were cruel, but I have a hard time believing that they’d witness, say, the president of a sorority brutally murder a maid and agree to keep the secret in exchange for a nice vacation. But that is what literally every Kappa sister chooses to do in the pilot of Scream Queens. Our ostensible final girl, Grace (Skyler Samuels), is surrounded by people she believes might be murderers, but continues to socialize with them anyway. In one particularly egregious scene, Chanel #2 (a misused Ariana Grande, who has more charm than Murphy lets her showcase) is smart enough to consider leaving the Kappa house but not smart enough to stop tweeting about the killer and scream for help. Is her insistence on texting an update to Sidney dialing 911 from her computer in Scream? Is it a commentary on millennials’ reliance on technology? Who cares. She never stood a chance anyway.

Scream Queens will be particularly disappointing to fans of Murphy’s work on American Horror Story, or even Glee. Far from perfect (or particularly coherent), those shows never felt like a rehash of something I’d watched before. Even at their many low points, they were never a bore. Scream Queens had the potential to bring together AHS’s point of view and Glee’s manic energy, but ends up being less than the sum of its parts.

Allison is double major in Political Science (Honors) and Film and Media Studies. When not working for The Daily Gazette, she cajoles people into watching the The Americans (Wednesdays at 10:00p.m. on FX).

One thought on “Scream Queens: Less Than The Sum of Its Parts”