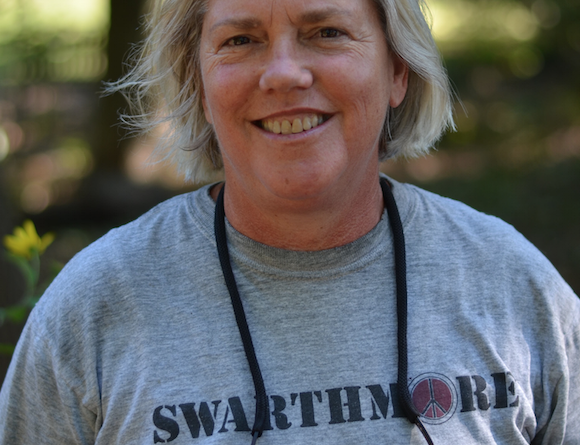 Swarthmore prides itself on the surpassing beauty of the pristine campus and lush grounds. Particularly for first years, being in an unfamiliar place with unknown people and new experiences feels more like home when you’re surrounded by an extensive, well-kept arboretum, where care exudes from friendly grounds staff and foliage.

Sheila Magee is a Swarthmore alumna who now works at the school as a gardener. Magee came back to volunteer at the Scott Arboretum in 2002, and two years later applied for a full time position as a gardener.

“I just kind of got hooked back into the school,” Magee said. Her re-involvement has not been limited to the campus grounds —  she has been drawn back too into the Swarthmore classroom, over 30 years after her graduation. She is currently auditing an environmental studies class called “Change Makers.”

Before coming to work at Swarthmore, Magee spent time raising her two daughters and doing field work on bird censuses.

“There wasn’t really any of that kind of work I could do here so I just switched over to plants,” Magee explained.

Since taking a twenty year break from the school, Magee says the grounds have significantly improved from when she was a student. And with an expansion in student enrollment from 1400 students in the 80s to almost 1550 students this year, the campus has had to add a few more buildings to accommodate, creating more work for the grounds staff.

“When you go to a place this small, 150 students is enough to make a difference,” Magee said. “I think the experience here is very different from in the past, but the community aspects of the school have stayed pretty much the same.”

Magee has made an effort to become more involved in the Swarthmore community over the past few years. “I’ve served on committees so I feel like I’ve gotten to meet more people on campus and people in different roles.” Magee is also involved in the divestment campaign on campus. “I knew some student workers who were involved in the very beginning and took an interest,” Magee said.

The grounds and arboretum staff also has positions open to students, allowing Magee and her colleagues to further become involved in the school, and interact more with Swatties. “Student staff are pretty much doing whatever we’re doing, shoulder to shoulder with us. I hope it’s a good experience for them,” Magee said.

Magee says she often recognizes students that pass her by while she’s working on the arboretum, but isn’t familiar with most. “It’s mostly the outdoorsy kids who we see out here and get to know; there’s always people at graduation who we’ve never seen before,” Magee said.

Apart from serving on committees and working alongside student staff, Magee said there’s not a very easy way for the staff to interact with the campus. “People don’t always say ‘hi’ to us. I’m sure that people have their own thoughts as they’re walking around and they don’t always notice us, and that’s fine,” Magee said. She said she remembers that as a student, she didn’t ever really take notice of the grounds staff. “I always sort of appreciated the grounds but didn’t really have any connection to the people who take care of them. I’m hoping we’re putting more of a face to that,” Magee said.

Magee says that it’s important to find a community at Swarthmore where you feel at home, whether that be working alongside the grounds staff, or just finding a group of people that make you feel comfortable.

“For me and I think for others too, college was a little easier to make friends,” Magee said. “Everything just opens up a lot more in college because you’re meeting people from way more diverse backgrounds. I tried to tell my kids to find the people who valued their friendship, valued them as people. Just anybody that you can really find a commonality with who is accepting. And it doesn’t have to be a ton of people, it doesn’t have to be a big group, just one person that you really feel like appreciates you for who you are and you feel the same way about them.”