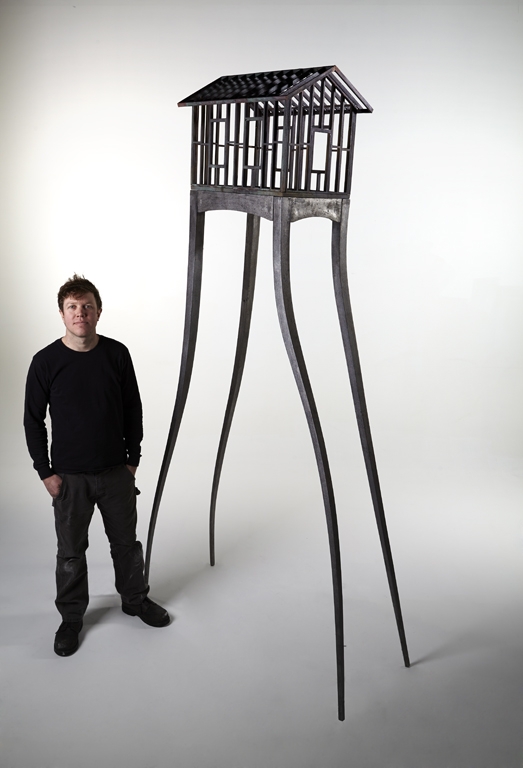 Drawn by the promise of an artist talk, air conditioning, and a reception of wine, cheese, and crackers at the Lang Performing Arts Center, community members gathered to view Ted Lott’s first solo exhibition in the Philadelphia region this past Thursday on September 10. His work is currently exhibited in the List Gallery through October 25.

Brian Meunier, a Swarthmore Professor and Coordinator of Studio Art, introduced the mixed media sculptor with an accolade. Lott, who received a BFA in woodworking and furniture design from the Maine College of Art and an MFA from the University of Wisconsin, Madison, primarily works with found objects.

Meunier shared his thoughts on such objects. “When artists use found objects, if they don’t have a lot of craftsmanship, a lot of skills, the glue that ties the found objects together, art is not there and what you basically have is some junk tied together,” he said. “You need that formal control and skill, and Ted has it in spades.”

Lott’s choice of chairs as found objects corresponds with his initial interest in furniture design. In order to investigate the intersection between architecture and furniture design, Lott used a grant from the University of Wisconsin to travel across the upper Midwest to take reference photos. Many of the houses which he photographed were Sears mail order houses. These affordable houses were sold as pre-made parts which were meant to be assembled on site.

One of his works featured in the List Gallery is inspired by a generic mail order house called a “four square” on account of the four floors each with four windows and four rooms. He applied the notion of a four square home to a chair, stripped it down to its original structure, and stretched it into a spire, evoking the image of a cathedral. Lott constructed this work during the housing crisis, a time during which many families lost their homes and began to question the legitimacy of the American dream. He added a false front, a type of facing that extends beyond the actual frame of a building to create the illusion of great height and width. False fronted homes are often associated with the commercial first floor and residential second floor structure of many early American homes. In this piece, he elongates the first floor perhaps to allude to the lofty business dreams of the resident.

“I think that the verticality of it speaks something to the aspirations of people who build houses like these, these modest single family houses that were the core of American life for a really long time,” Lott added.

To return to the question of how chairs became the foundation of Lott’s work, the artist explained, “There is a similarity between the spaces which these objects are designed for. You know a piece of furniture is designed to fit around the human body […] and like that architecture is designed around the space of the human figure but on a larger scale.”

Beyond the similarity in conception, furniture and homes are also linked in that they both act as a medium through which the design of an era is expressed. For instance, Lott identified the swan’s neck pediments of classic Georgian architecture, as spotted on his Midwest travels, as a motif on furniture from the same time period. He proceeded to construct a miniature house around this design, intending for the carvings on the chair to serve as the swan’s neck pediment of a house. And so began his habitation series, for which he took a different piece of furniture and modified it with the scale of architecture.

More recently, Lott created a migration series which is also on display in the List Gallery. He still used found objects as the basis of his dwarf homes, but rather than using chairs, he used a medley of trunks and suitcases as the structural frames. The migration series is based on his own experience as an itinerant artist, always moving around and finding new homes for himself.

Before opening the floor to questions, Lott admitted that the constant behind his work is the idea that “each piece suggests its own architecture. Letting each object really inform the design of the finished object is essential.” Looking around campus, the most remarkable chair is without a doubt the oversized adirondack chair. Into what type of abode might Lott feel inspired to convert this Swarthmore staple?