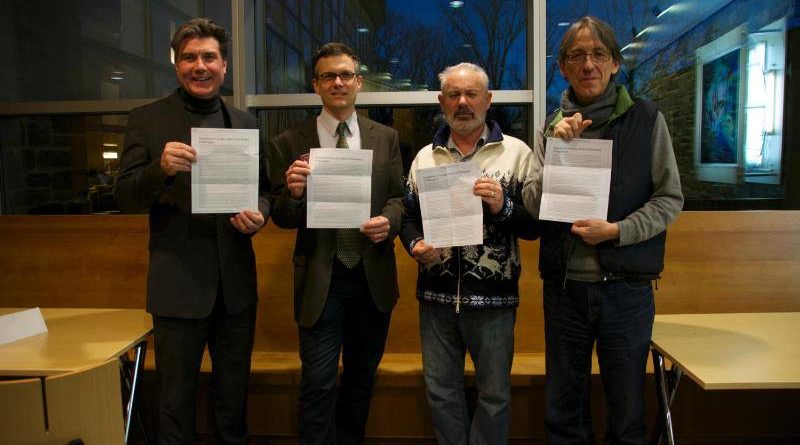 During a faculty meeting held on Friday, April 17, faculty members at the college voted decisively in support of a proposal calling for the college to divest from all primary holdings in fossil fuel companies. The vote — the results of which were 40 to two, with four abstentions — was conducted at the behest of a committee of the seven faculty members who authored the proposal: Mark Wallace, Betsy Bolton, Carol Nackenoff, Carr Everbach, Lee Smithey, Sarah Willie-LeBreton, and Joy Charlton. The proposal was written in light of the sit-in staged by Mountain Justice that began on March 19, asking the college to divest from all holdings in fossil fuel companies. The more modest demands of the faculty proposal were written in the context of the impending meeting of the Board of Managers that will take place on May 1 and May 2, addressing the topic of divestment.

“We thought we could break the logjam between the students and the Board by offering a third way,” explained Wallace. “It’s not total divestment from fossil fuel assets — although for many of us, that’s what we would want — but also we were in disagreement with the board saying ‘No’ to any divestment, so what we offered was a first step towards a larger divestment conversation.”

If they agree to the faculty proposal, the board would need only to divest from fossil fuel holdings controlled directly by the College instead of fossil fuel holdings controlled by the various hedge funds through which the college’s endowment is invested, as Mountain Justice has demanded that they do. According to Wallace, primary holdings make up around one eighth — or $250 million — of the college’s total holdings, and of those primary holdings, between 3 to 5 percent are invested in fossil fuel companies. The faculty proposal calls for these assets to be repurposed into more sustainable and environmentally responsible funds than fossil fuels.

“Certainly, from my perspective the effort to find a compromise was a very good thing to do,” said Stephen Golub, who spoke at Friday’s meeting and is a Professor of Economics at the college. “I think the compromise they proposed certainly was a possible way out of the situation.”

Despite lauding the efforts of the faculty to reach an agreement with the Board, however, Golub argued that divestment is not the right approach to combat climate change because it is both impractical and hypocritical.

“I find it morally questionable as an approach. It’s passing the buck to the college and involves taking no personal responsibility, though people may do so in their own lives,” Golub said. “There is no courageous action. There is no cost to yourself in doing this. I think it sort of allows you to feel good without doing anything … How can you vote for divestment from all fossil fuels and then ever get on an airplane? How do you justify that? Its schizophrenic to me, hypocritical, at least illogical.”

Arthur McGarity, Professor of Engineering at the college agreed that divestment would be somewhat self-contradictory for the college to pursue.

“I am bothered by an inconsistency lurking in the faculty’s divestment resolution which would have the college attempt to harm the fossil fuel extraction industry while, at the same time, remaining a loyal customer of that industry as we purchase and consume their products daily,” McGarity said.

According to those against divestment, divestment cannot function as a viable solution to climate change because it addresses only the contributions of the fossil fuel industry instead of examining the problem on a more fundamental level of individual responsibility. As such, divestment appears to serve as little more than a statement of moral superiority couched in the language of Quaker virtues.

“It’s part of this knee-jerk anti-corporate attitude that pervades our student body, obviously not everybody,” Golub said. “It feeds into this kind of simplistic view of the world. Climate change is so complex. We are the problems when we take airplanes. Theoretically, we should divest from ourselves.”

Golub suggested that because fossil fuels will likely remain integral to supporting human life for years to come, individuals at the college should focus on advocating for carbon taxes and cap and trade agreements instead of divestment from fossil fuels. For Golub, the only morally acceptable form of divestment would be divestment exclusively from holdings in coal – as Stanford University decided to do last year – because coal at least can be feasibly eliminated as an energy source. According to Golub, this alternative would be more logically coherent in terms of individual and institutional responsibility as the college does not rely on coal for power.

According to Guido Girgenti, an organizer with Mountain Justice, however, divestment and individual responsibility are not mutually exclusive.

“I think the question of individual responsibility and institutional responsibility should go hand in hand,” Girgenti said. “It’s ‘both and,’ not ‘either or.’ Of course, we should be committing millions of dollars to sustainable buildings, and of course we should be pursuing carbon neutrality on campus and taking individual responsibility towards that goal … but it makes no sense to individually reduce our carbon footprints while we institutionally invest in, and legitimize, an industry whose business plan is scientifically incompatible with a just and sustainable future.”

“One of the anti-divestment arguments is that Swarthmore would be more consistent with its core values if it encouraged individuals and the institution to address climate change through restricting our carbon footprint,” Wallace said. “Those of us who favor institutional divestment completely agree with that. We need the consumption wing on one hand and the divestment wing on the other hand. We need to send a signal to the world that business as usual is going to cook us alive. We need to pull out of fossil fuels on the one hand and restrict our use of fossil fuels on the other.”

Because those in favor of divestment and those against divestment share many of the same values, Wallace describes the debate over divestment as a  “lovers’ quarrel.” Despite the passionate opinions of both sides, Wallace believes that in the past, shared interests have allowed for generally amicable discourse on the topic. This was especially true in last Friday’s faculty meeting where several people, representing a diverse array of departments, were given the floor space to voice their opinions.

“This portion of the meeting probably lasted 45 minutes,” Wallace explained. “Very impassioned, thoughtful, respectful arguments pro and con on both sides of the fence.”

At 1:50 p.m., 10 minutes before the vote on the proposal was scheduled to take place, a fire alarm went off in Kohlberg, interrupting what was described by many at the meeting as a particularly passionate speech delivered by Marjorie Murphy, Professor of History at the college. Murphy was giving an argument in favor of divestment. The delay caused by the fire alarm forced an evacuation of the Scheuer Room and caused the meeting to go over its allotted time, appearing suspiciously opportune to some.

“We all professors thought ‘ok who threw this?’” Wallace said, jokingly. “Now it could have been an accident. Was it the pro-divestment people? Was it the anti-divestment people? I can’t picture a faculty member pulling a fire alarm … I’m not exactly sure what purpose that would serve. Maybe to derail the vote.”

According to Mike Hill, Director of Public Safety at the college, the alarm that was triggered could not have been set off by any unscrupulous behavior as that particular alarm is not accessible to the public.

“We were able to determine that the alarm that was activated at Kohlberg was a duct detector in an air handler unit and was most likely set off by dust,” Hill explained. “This type of detector is not accessible to the public. It is extremely rare that anyone in our community activates a pull station.”

“The resolution is a compromise, not complete divestment, but I supported it and respect the good folks who put it together, they did a lot of work,” Murphy said. “I seconded the motion because I thought it was a good faith beginning, something we are likely to revisit in the future and I called it a ‘first step.’”

This first step was important not only as a means of widening the conversation on divestment, but also to affirm faculty support for the students involved in the sit-in. According to Girgenti, though Mountain Justice members knew that faculty members were discussing ways in which to seriously engage the Board of Managers in the divestment discussion, the rapidity with which the faculty developed and voted on a proposal for divestment was unexpected.

“I think I was surprised in some ways by how quickly the faculty responded to the opportunity because divestment was only publicly confirmed to be on the Board’s agenda on March 19, the first day that we began the sit-in,” Girgenti explained. “The speed with which the faculty responded to ensure that their proposal would be considered at the May board meeting, I think is stunning and also wonderful and a testament to the spirit of leadership for the common good that is infused among our faculty.”

According to Wallace, though the faculty committee did not directly coordinate with students on their proposal, the committee was cognizant of the potential implications of a faculty resolution on the duration of the sit-in.

“We thought that was a good kind of compromise proposal that the board would agree to and that would help the students see their objective being reached now in a step by step way where you’re not doing everything all at the same time,” Wallace said. “Lee Smithey and I were the two faculty who worked a lot with the students on this, and they said ‘Yeah that’s ok with us. You make that proposal and if the Board is willing to seriously negotiate with us about endowment divestment, then we will likely shut down, and that’s what they did,”

Though members of Mountain Justice, as well as members of the faculty committee, have stressed the importance of shared administration of the college between the Board of Managers and faculty, the extent to which such governance will come to fruition remains to be seen. The implications of the faculty’s vote will be difficult to measure given that the topic of divestment has been on the agenda for the Board’s May meeting since mid March.

“As a college and as a Board, we care deeply about the impact of climate change on our futures, and that of the planet,” said Gil Kemp, President of the Board of Managers, in an email. “I thank the faculty for their input. The Board has long planned to continue our discussion about how we can further address climate change as an institution at our meeting in May.”

Some professors, however, feel that the opinion of the faculty should not weigh heavily in the Board’s decision on divestment given how politicized the issue has become at the federal level.

“I fully support and have much respect for my faculty colleagues who have given their personal time to join the student divestment protest or to counsel the student activists on strategies and compromises,” McGarity said. “Generally though, I do not agree that it is the proper business of the faculty to pass resolutions supporting a particular political viewpoint in a national debate.”

“We as faculty can’t teach you about the future if we’re also invested in destroying your future,” Wallace said. “I mean, that’s as clear to me as the nose on my face…I can’t ask you to be a person of the future if I’m invested in the very industry that’s going to destroy your future. We have — we being my generation — have left you with a horrific mess and for us now to balk at punishing the fossil fuel companies for what they’re doing seems crazy.”

2 thoughts on “Faculty vote in favor of fresh divestment proposal”