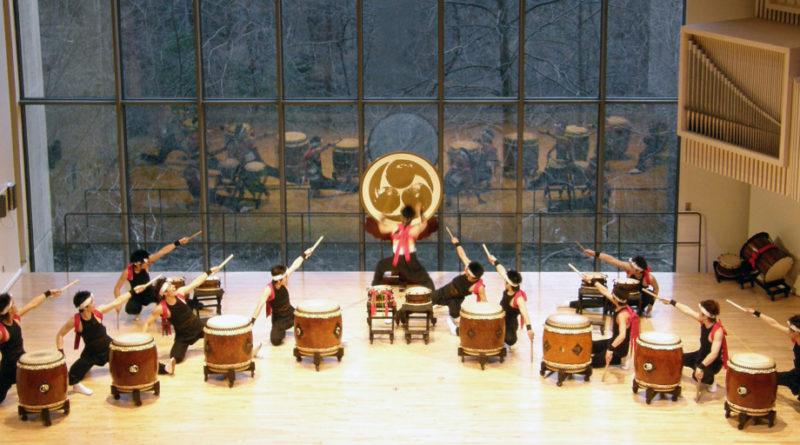 I imagine there are different kinds of loud, all lying on a spectrum between relentless infants (bad) and breaking in new speakers at a party (good). Those who were in fourth grade band and have been to a rock concert will admit that the sound of a passionately whacked set of drums subscribes to the same order.

The Tamagawa University Taiko Ensemble establishes itself on the latter end of the continuum from the first bang of the percussion, and maintains its artful volume through all twelve acts. The loudness is sometimes frightening, sure, but never offensive, never noisy, and never out of place. The rhythms are engaging, the energy is high without being tense or overwhelming, and clapping along is sometimes even encouraged.

The show opened with a shocking ring from a big circular drum and developed into a twelve-man (the use of “man” here will prove to be kind of important) rhythm show with every beat in its right place. They took a break to rearrange the drums and, after some applause, one of the leading members expressed his gratitude to the audience for coming to see them.

“Thank you for coming!” he said. “We are so fortunate to have a warm and loving audience like this one. We will do our best to empower you through our performance.”

I was pretty excited about the audience too, having been to so many interesting art events on campus with so few attendees besides myself. It was great to see a good number of students included in the massive crowd that had filled the Lang Concert Hall. Most of the audience members were on the edge of their seats when not reeling back in them from the initial shock of the high-volume performance.

The drummers cleared out and the dancers came out. Music started to play, and the energy in the room became noticeably different. Now it was a twelve-woman show of brilliant choreography and remarkable tightness of motion. The dancers navigated the stage in a pattern of assembly, disassembly, and reassembly as they arranged themselves into little circles and gears and zig-zag lines around the performance space.

They made their exit and were followed by another drum act. It was similar if not identical — not that this is a bad thing — featuring a new drum formation and repertoire. The group reached massive cadences several times during the performance, each one resembling a dramatic conclusion. Each one was met with a roar of applause and cheering, as if they were finished, and every time until the actual very end they tricked us all with more drumming.

The rest of the acts followed a cycle of men performing, women performing, and together performing of drums, dance, and drum and dance respectively. On paper it is simple and repetitive, but in practice it was too interesting and fun to feel like it dragged.

What is most impressive about the ensemble is the amount of control and coordination. The drummers raise and lower their arms at exactly the same time. Each mallet makes contact with just the right amount of force for a balanced and rich “bang.” The dancers are able to converge from a measured presence of chaos into rigid formations, dancing around each other in a manner that is beyond graceful. Sometimes, a performer would have a hat — or an entire body — fall out of place and on to the stage, and it’s impossible to tell if any of it is by mistake or just by product of some special kind of extreme poise.

The performances were extremely gendered — strong men shouting and energetically beating the drums while kimonoed women danced as if they were floating over the stage, sometimes teasing their male co-conspirators and looking only either shiny and delicate or ghostly and witchlike. It got a little disturbing. Of course, I’m not a good judge of how much this might upset3 you, but I would recommend doing your best to divert your attention away from the show’s probably hypermasculine dynamic and towards its really beautiful and awe-inspiring everything else.