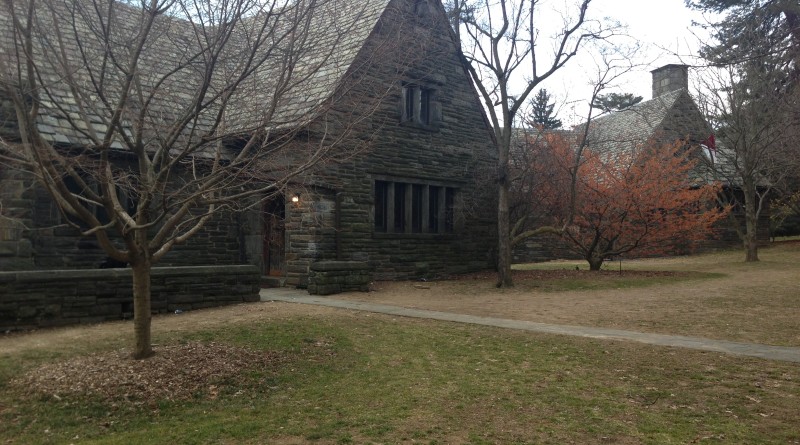 “We were surprised and dismayed to find graffiti sprayed on the front of the Delta Upsilon Lodge this morning,” said DU in a written statement on Tuesday. “We condemn in the strongest possible terms both the act of vandalism itself and, more importantly, the message that it displayed. We truly appreciate the support we have gotten from members of the Swarthmore community since this incident and we look forward to continuing to work with the campus to create positive change.”

The Daily Gazette reached out to DU leadership, who had no further comment on the issue.

Swarthmore students had more varied responses to the incident.

“My heart sank when I saw the graffiti,” said Jodie Goodman ‘16. “It reminded me of the anonymous chalkings and posters from Spring 2013, and more than anything, it brought back the fear of a vitriolic divide on campus.”

Rather than an attempt at activism, she said, the graffiti could be an act of frustration on the part of a survivor of sexual assault. “I can imagine someone feeling hurt and frustrated and scared and abandoned by the College eventually thinking that the only way they could construct any modicum of justice in their life was through this act of civil disobedience […] I don’t condone the action, but I want to acknowledge and validate the emotions that led someone to make that choice. If someone felt like this was the best way to ameliorate the pain they’re dealing with, I think the onus is on all of Swarthmore to consider why there weren’t more productive methods and places for processing that pain.”

The matter is “under investigation” by the administration, according to a Wednesday email sent to the student body by Associate Dean of Diversity Lili Rodriguez and Director of Public Safety Mike Hill. They expressed their disappointment with and refusal to tolerate the vandalism, and requested that anyone in possession of relevant information share it with either one of them.

“Building a community is not an easy task. It takes genuine effort from all members. One of the commitments we need to make, to reach that goal, is to treat one another with the respect and dignity that all people deserve,” they stated.

The Daily Gazette reached out to the Title IX Office, which has not yet responded to requests for comment.

The graffiti has sparked discussion on campus and on social media sites about sexual assault and the role of fraternities in student life.

“Unequivocally, the most important piece of this discussion is that we, as a student body, need to collectively acknowledge that sexual violence happens on our campus. It is too easy to say ‘rape happens in the frats,’ and for the frats to respond ‘not that we know of’- and the conversation grinds to a frustrating halt,” Goodman said. “I think we need to address the issue of sexual violence in a way that encourages all students to critically examine the way they, as individuals, contribute to making campus a safer or more dangerous place […] The “frats vs activists” dynamic has to end. We are Swatties fighting rape culture and trying to facilitate and maintain a community we can be proud of and safe in.”

Matthew is a junior from Delaware. He is a Contributing Editor for The Daily Gazette.