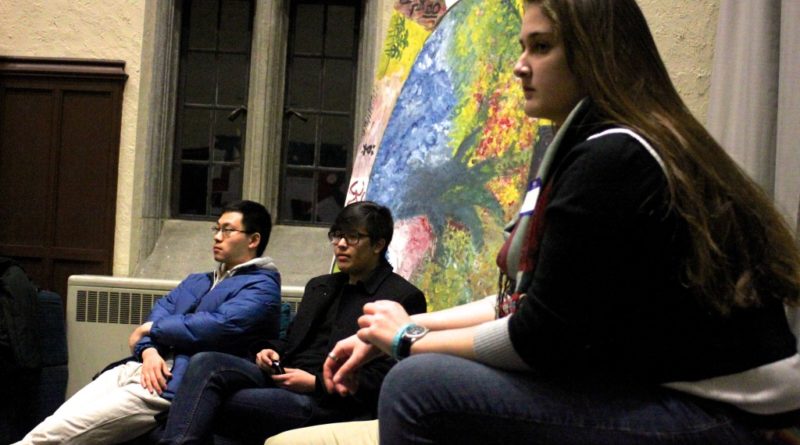 The Swarthmore Organization of Low-Income Students held its first open meeting of the semester this week, inviting students of all socioeconomic backgrounds to participate in a discussion on how class is perceived at the college. Doubling as its first open meeting and its first meeting as a chartered group on campus, the meeting was intended as a way for students to discuss what class means, what it means to be an ally, and how students can work together to make Swat a more inclusive place for everyone.

Founding member Cat Velez ’17 explained that SOLIS is a group for low-income students dedicated to raising awareness of class issues on campus and providing a community of support for these low-income students. The group’s members also hope to help incoming students from low-income backgrounds acclimate to what Velez called the “culture shock” of the first year at an institution like Swarthmore.

Roughly 15 students came together in the Intercultural Center to take part in the meeting, which broke into smaller discussion groups after initial introductions. All of the discussion groups, facilitated by SOLIS executive board members, centered on three major points: how class identities interact and intersect with other identities, how students have interacted with students of class backgrounds different than their own, and classism and allyship at Swarthmore.

Lucia Luna-Victoria ’15 said in the discussion group that in her experience, talking about class on campus is something of a taboo among Swatties.

“It didn’t come up for a long time, and when I brought up comments about it … it just kind of shut down. That’s not something that people want to discuss. Sometimes I don’t even want to discuss it,” she said. She thought students may just not understand how to discuss socioeconomic class with others on campus.

George Abraham ’17 feels that some parts of his identity intersect more strongly with his class background than others.

“As someone from a middle class background… being queer hasn’t necessarily intersected as much with my [socioeconomic] background. I will definitely say that my Middle Eastern background has intersected a lot more,” Abraham said. In the discussion, he spoke about his family’s emigration from Palestine to the United States and explained how his father always believed that one’s monetary wealth was the equivalent to one’s ability to raise a family.

“[As my father] raised me, he was like, ‘You should always be conscious of your money. You go to school to make money in the future,’ so money’s always been a thing that’s been thrown around in my household,” he continued.

Luna-Victoria also highlighted the ways that her ethnic and socioeconomic identities intersected in her life during the discussion. She explained that her mother comes from a privileged background in Perú, and as a result, she did not really see herself as low-income, even though Luna-Victoria perceives her family as low-income in a United States context.

In Abraham’s experience, interacting with students from different classes varies, depending on what a person’s class is in relation to his own.

“I definitely notice a trend where if I’m interacting with people of a lower or equal income background than me, people tend to talk about [class]. But people from a higher, middle-high class background just avoid it,” Abraham said. He believes that Swarthmore students, especially upperclassmen, often say things to him without wanting to be condescending, but that are often still a shock to someone of a lower class background.

“I have a lot of friends that are like, ‘Oh, I’m casually flying to Florida and staying in a hotel for spring break,’ and I can barely afford to go home,” Abraham said.

A participant who preferred to remain anonymous said that they were angered by a group of students in their major when they collectively agreed that middle- and upper-class students have it the hardest on campus. They felt uncomfortable as a student from a middle-class background to hear these sentiments, because they felt grateful to be able to attend Swarthmore at all.

“If there were a drop in my financial aid, my family would figure it out. But for someone of a low-income background, if they have a drop in their financial aid … there is no ‘figuring it out’,” the student said. They also said that this line of thinking needs to be eliminated from Swarthmore’s campus.

Another concern agreed upon by the members of the discussion group was access to proper healthcare for low-income students. Both Velez and Abraham shared personal experiences where they required urgent medical care at Worth Health Center, but could not be properly treated because they were low-income students. At Worth, they were given medicine and other necessary medical treatments and told that the expenses would be billed to their student accounts, but both were forced to refuse treatment and medication because no one in their families would be able to cover the added costs. Velez also shared that she is currently thousands of dollars in hospital debt because her Swarthmore-provided health insurance was not accepted at the hospital she was admitted to.

At the conclusion of SOLIS’ first open meeting as a chartered organization, Velez was satisfied with the effects of the meeting.

“I think [the meeting] went really well, and I’m glad there was a lot of mutual respect,” she said.

Josh Medel ’18, who also attended the event, was glad to see a safe space for low-income students at Swarthmore.

“Everyone was supportive of one another, making it feel like a safe space to speak. I hope in the future more students can come to these open meetings, despite their background,” he said in an email. “I’m glad that we are starting these conversations on class; it is needed on this campus.”

SOLIS is open to all students who identify as low-income, and meets on Thursdays at 7 p.m. in the Intercultural Center.