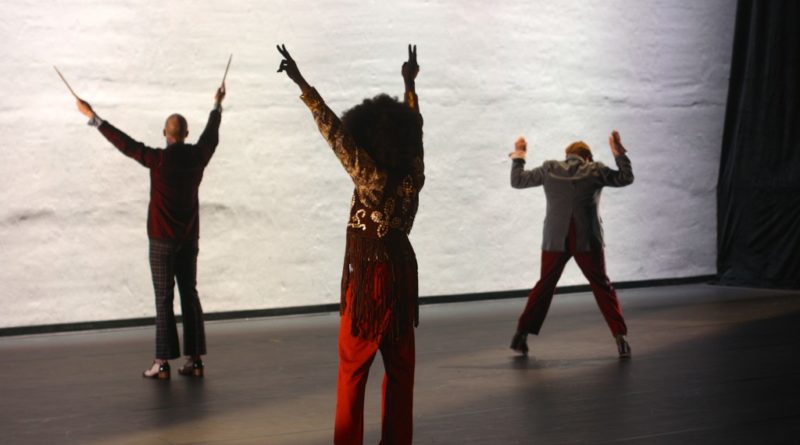 The audience hurriedly shuffled onto the stage in Pearson-Hall Theater, gyrating in what could only be described as a crude attempt at a distorted Cupid Shuffle. What they lacked in technical talent, however, they more than made up for with enthusiasm sparked by the performance they had witnessed in the previous hour.

Choreographed and staged by David Dorfman, Prophets of Funk synthesizes the funk and modern dance aesthetics. It also follows a plot line inspired by and showcasing the music of Sly & The Family Stone, a San Francisco band that was heavily influential in the funk and psychedelic movements of the 1960s and ’70s. Funk was not only the inspiration for this recent composition, but also the concept that initially got Dorfman interested in dance.

“I pretty much started as a disco dancer in college. The ’70s were rich for me. I saw “Saturday Night Fever” in the theater the week it came out when I was in college, and I was hooked. About four years later, I was studying seriously in an MFA in Dance program,” recalled Dorfman.

The performance follows Sly & The Family Stones through the band’s history.

“[It’s] a classic arc of ascension to power, fall from grace, [and] redemption,” said Dorfman. Thematically, the piece as a whole focused less on the band and more on the feelings that its movement inspired.

“We weren’t interested in a clear, literal narrative,” said Dorfman, “rather one that would give a feeling or state in regard to these ideas, and in so doing imbue the dance and the audience with a sense of tragedy, joy and hope. In the end, it’s not Sly’s story — rather the group’s story, the audience’s story, the world’s story,”

As one of the first popular racially integrated bands in America, Sly & The Family Stone promoted love and acceptance in their material and contributed to the national fight against racism and prejudice. Dorfman hoped that Prophets of Funk would serve not only as a representation of the band’s fight, but also as a reiteration of its messages directed at 21st century America.

“Our intent was to introduce a whole new public to the bold, hopeful music and message of Sly & the Family Stone, while delivering a bittersweet reminder to those of the era that we are so very far away from a post-racial America,” said Dorfman. “We still have so much work to do. And we won’t give up,” said Dorfman.

Dorfman’s work is not only about concept and messages.  It is also about taste, dance style, the flowing and rhythmic aesthetic.

“I love working with the hips and sensuality. Our goal was to mix and match old funk steps with new ones, and then mix those steps with modern and post-modern vocabulary so a hybrid is created and can stand for today’s funk in the world,” said Dorfman.

This is fitting, seeing how the dance style of “Prophets of Funk” is most aptly described as having just that: a heavy dose of funk.

“[That] uncontrollable sensuality that leads your body in articulate ways of loving seduction and playful bliss.,” described Dorfman. “The depth of sadness that you feel when you just don’t know what to do to change course … I am always looking for physical metaphor when I choreograph, so the notion of funk having so many meanings is intriguing and gives way to a full complement of movement ideas.”

The performance’s energy was not focused on resurrecting Sly & The Family Stone’s music, or composing a meaningful modern dance show, or even fighting one specific issue like racism, but as Dorfman puts it, leaving the audience imprinted with “an indefatigable desire for change,” and, of course, a false sense of confidence in their dancing.