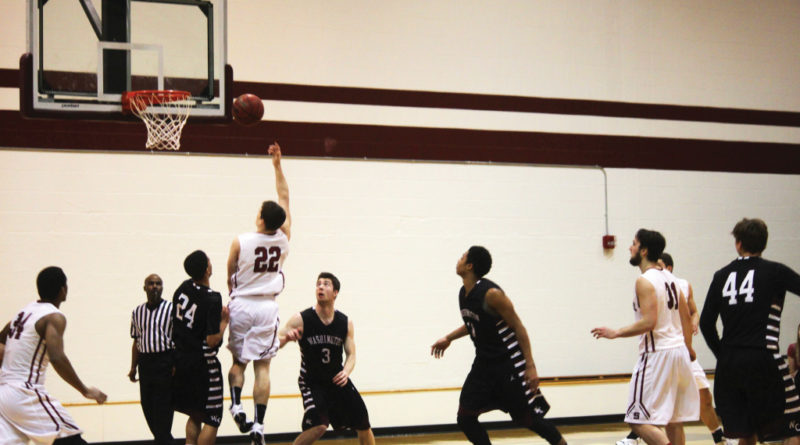 As the final seconds ticked off the clock last Wednesday night, feelings of triumph and relief permeated the Swarthmore bench. The Garnet barely squeaked by rival Haverford in a thrilling 76-75 victory. However, if it weren’t for the underclassmen’s resiliency, Swarthmore would not have put this game in the win column at all.

Down by nine points, 57-48, with less than eleven minutes to play in the second half, the Garnet launched a massive comeback. Sam Lebryk ’17 and Zach Yonda ’18 catalyzed the run, making consecutive three-pointers to cut the deficit to three. From that point on, Haverford and Swarthmore went blow for blow until the final moments of the game.

With thirty seconds remaining and Swarthmore down 70-67, a big play had to be made. Coming off of a Lebryk screen, point guard Matt Brennan ’18 caught a pass from Yonda and drained a three-pointer just left of the top of the key.

“It was a good play. Coach [Landry Kosmalski] set us up well,” Brennan said. “[I was] one of the last options on the play, it just happened that Sam screened [the defender] and then Zach (Yonda) was able to find me.”

Swarthmore retained the momentum and stopped Haverford on their next possession, forcing the game into overtime. In the five minute extra period, both teams struggled with offense. Haverford struck first, making one free throw. Then, Chris Bourne ’17 traded two baskets with Haverford, keeping Haverford ahead by one (75-74).

With fewer than twenty seconds left, Swarthmore had possession, and Yonda took the game into his own hands. He drove hard to the hoop and drew a foul. Heading to the free throw line with a chance to give Swarthmore the lead, Yonda didn’t let the pressure get to him.

He calmly hit the two free throws, putting Swarthmore ahead 76-75.

“I’m pretty confident at the line,” Yonda said. “It’s [mostly] mental…. It’s an open shot from fifteen feet away so no one should really miss it. But people do miss because people get inside their own head.”

One thing is for certain: Yonda did not get inside his own head. He stayed within himself and bolstered his free throw clip which now stands at 89 percent — good for the best percentage among all Centennial Conference players.

Just seconds after the second free throw hit the twine, the Garnet defense forced a Haverford turnover, wrapping up the hard-earned win.

Even though the common saying “a win is a win” holds true, Yonda believed the Swarthmore team should’ve played better.

“The game was kind of ugly in the way we played,” he said. “We wanted to beat them by more.”

Brennan viewed the game in a similar light. “I was relieved,” he said. “It was a big win for us.”

These two players’ reactions to the game indicate that they know they are capable of playing basketball at a higher level than what amounted to only beating last place Haverford (1-9 in conference) by one point. Their dissatisfaction with such a slim margin of victory may be an indication of the changing dynamic of the basketball team as a whole.

Perhaps the most evident shift in the program’s course is its reliance on underclassmen. In the Haverford game, six of the seven players who played more than twenty minutes were underclassmen: Bourne, Brennan, Lebryk, Yonda, Robbie Walsh ’18, and Andrew Kaufmann ’18. People should get used to seeing these names written together because these players will remain the team’s core for years to come.

Kaufmann said, “Because we are playing so many young players, it will help us in the long run because we’ll gain a lot of experience.”

Brennan echoed Kauffman’s sentiments: “We’re learning lessons now that will benefit us in the future. The more we play together, the more we’re able to grow. On the court, I think we’ll be pretty competitive for the next couple of years.”

Brennan’s choice of the word “competitive” may seem like a surprising one to describe a program that has not finished higher than seventh in the conference since the 2006-07 season. However, this year Swarthmore currently holds sixth place in the Centennial Conference. And with an incredibly young roster, the Garnet have the potential to be more than just “competitive” in the next couple of years.

“Promising” was the word Yonda used to describe the future. And after a “promising” first half to this season, the team should only improve in the second half.