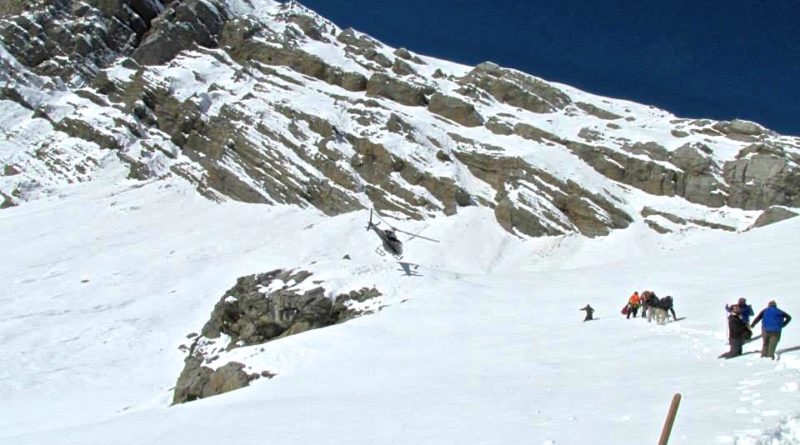 When Max Weinstein ’19 began his trek through the Nepali Himalayas last month, he didn’t even own a pack.

The soon-to-be Swarthmore student from Mountain Lakes, New Jersey had been working at a Happy House in the city of Pokhora, Nepal, for three weeks when he decided to set out into the mountains to complete the Annapurna Circuit. With a trailhead seven hours from Kathmandu, this is a twenty day trek that covers over a hundred miles in a loop. It has been called the best trek in the world — “the perfect circle.”

Perhaps because of the frequent traffic, the hike is not quite as rugged as it initially sounds. It’s traveled by hard-core trail junkies, but also by young people seeking out adventure. A controversial road is being built along one section of the trail, increasing access dramatically. It is widely regarded as safe, and universally agreed upon as beautiful. So for Weinstein, whose experience was limited to summer trips in the Adirondacks, it seemed like an opportunity too good to miss.

The trip was a last-minute proposal. After several weeks of work in a monastery, Weinstein and a friend in the program decided to extend their stay in Nepal for three weeks. They took the bus 20 minutes into the nearest town to make a few phone calls, including one to Weinstein’s parents.

He didn’t suspect his next phone call home would be to reassure his parents that he had survived the international-news making blizzard. In fact, he didn’t suspect anything dangerous was coming his way for the first two weeks of the trip, which were almost luxurious by trekking standards.

The towns where the pair stopped were mostly centered around tourism. They often stopped for a village staple called Tibetan bread, a sweet dessert akin to funnel cake. On their first rest day, Weinstein and his traveling partner even went shopping. Even above ten thousand feet and walking long distances every day, the trip was comfortable.

“Out of all of the hiking I’ve ever done, the amenities were unmatched,” said Weinstein. “Every hour or two you’d sit down in a hotel restaurant and get an omelette for a buck and a half.”

But as they ascended into high altitudes, the traveling became harder. When they arrived at a town situated at more than 16,000 feet, the pair was forced to take a rest day. “The air was thin and it just didn’t feel healthy,” said Weinstein.

“It was on that rest day that we noticed these really high, thick, grey clouds,” he said. But when he asked someone at the lodge if that was normal, she replied that it was fine. She said it sometimes gets cloudy in the afternoon and by the morning it would be clear.

The snow began falling overnight. It was not heavy, but a driving wind blew it around outside the lodge. By the time the two woke up on Tuesday, October 14, there were four inches of snow on the ground. But in the dining hall, used plates and trays were being cleared. A French traveler who had completed the circuit several times encouraged Weinstein and his traveling partner to head out.

They learned later that of the 107 people who set out that morning, only eight had turned back. The rest continued along to attempt the Thorung La Pass, which ascends 2,500 vertical feet. After the initial ascent, there’s another 5,000 foot high-altitude climb — a solid challenge for even an experienced trekker. About an hour into the day’s route is the lodge known as High Camp. “Beyond that,” said Weinstein, “it’s really just mountain.”

The travelers set out in a group of about 25 to take on the pass, which peaks at 17,769 feet. They had been walking for about forty-five minutes when Weinstein heard a loud boom. His first thought was that it had been an avalanche nearby. “The other lodgers lightly teased me, saying ‘you’re being paranoid, it’s fine.’ So I said ‘ok.’”

About 300 feet from their route, the top layer of snow had slid down into the gorge where they walked. The snow carried dangerous rocks. As the wind began to pick up, snow covered the trail that had been marked by previous groups’ footprints. The party decided to hike to High Camp and wait out the storm. They continued to hear loud booms until they were inside the lodge. The manager of the lodge told the travelers it was safe, but they decided not to continue, saying “it was really obviously not safe at that point.”

Eventually, the wind grew so strong that hikers staying at High Camp could not walk outside long enough to make it to the outhouse. But the lodge had plenty of supplies, and even hot water. They lost power a few hours into the storm, but managed to stay warm as night fell. It became clear that the way down from camp was unpassable — the group was stranded.

On Tuesday, October 14, the group received a message from a porter who had descended from the top of the climb, which would have been just a few hours down Weinstein’s projected route. People were freezing to death at the top of Thorung La. They said it was a life or death situation. From the landline at High Camp, a lodge worker was able to call the Israeli embassy.

The next day, the embassy called back. They were informed that at least twenty people had died at the summit.

Weinstein was able to reach his mom on the same landline that had been used to contact the embassy. “The connection was so crappy that all she got was ‘storm,’ and she said that she had to drop the kids off at school in ten minutes.” When she saw the storm on the news later, she already knew he was alright.

On Thursday, October 16, 23 bodies had been recovered from the pass. Twelve people froze to death at the summit, and others were killed in individual avalanches like the one that Weinstein’s party encountered on their way to High Camp. Over the next few days, the final death count had rose to 43, 35 of whom were tourists. Speculators have suggested that this does not include the deaths of approximately another 30 native Nepali who lived in the Annapurna region.

21-year old Maya Ora was among the Israeli party stranded at the top of Thorung La. “We were walking between the bodies and bags and we could see our dead friends and the bodies of the guides,” she told the Guardian.

On the morning of Weinstein’s fourth day stranded at High Camp, an Israeli helicopter arrived and transported the party at High Camp down 3,000 vertical feet to a village that the two had passed on their trek. The village was markedly different from when Weinstein had passed through before. “There wasn’t anyone there anymore,” he said. “There were no tourists, just the locals.”

All routes out of the village were still blocked, so another helicopter ride took the trekkers all the way down to the jungle where a Jeep picked them up and drove them back to Pokhora.

“It was suddenly 80 degrees again. It was whiplash.”

Back home in New Jersey just a few weeks later, Weinstein is beginning the work of processing how close to danger he really was when the storm hit. During the crisis, he did not feel afraid. He was lucky enough to be at the lodge where there was adequate food and shelter from the storm. But his proximity to the tragedy was remarkable — “We were maybe a couple hours’ walking away.”