Arts » Artist Spotlight » On Ian Hoffman ’15, from the poet to the poetry 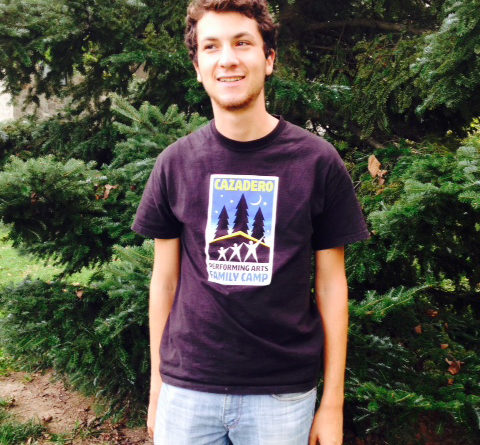 “I would very much like,” Ian Hoffman ’15 confessed, as we approached the end of the interview, “to stop writing.”

Regarding poetry itself: “I don’t think it’s ‘important.’ I like writing it. But it’s not important like ISIS is important.”

“I get lost sometimes,” Ian had told me earlier.

The Creative Writing Club he founded at Berkeley High in California was a bit of a self-described “scam.” Hoffman said, “My mom told me to get up off my ass, and that I needed something to get into college.”

Scam or not, Hoffman and a friend successfully published a book on Amazon, and Hoffman ended up at Swarthmore.

“Afterwards, [we] had a gigantic fight about who would take credit for the successes,” he said. He was “hurt and angry.”

Not unlike how a journalist might regard a poet, Hoffman said, “I felt a little jealous that this kid was such a talented artist.” He has a competitive spirit, after all. For this, Hoffman credits his fearless third-grade self, reading poems before twenty other poets at the Albany Community Center, for that.

Interviewing a poet turns his poetry into a cause, instead of the effect and art that poetry is in reality. As a result, and as a journalist, I must explain myself. Why am I interviewing Ian Hoffman after all, a poet at Swarthmore College who is poetic enough to receive financial support from the college to write creative poetry for an entire summer? I interrogate him as a result of his poetic success. I subject the origins of the poetry in him to my own rough generalizations and faulty intelligence. I subject Swarthmore’s investment in him, and readers’ investment in this article to questioning because Hoffman is a poet and this is a profile of a poet; the poetry, on the other hand, remains secondary, ‘everywhere present but nowhere visible.’ The structure of this supposedly objective narrative is thus biased, structurally, from the beginning by an apparatus of confession, whilst the journalism is by the genesis of its various disciplinary techniques and these techniques’ need for a culminating sacrifice. Hoffman was willing.

At Swarthmore’s poetry workshop, Hoffman didn’t feel like he got to “indulge” in his poetry. The question of how constructive poetry classes in college have been for the poet is touched upon but not answered. I don’t believe it should be.

Social life at Swarthmore “hasn’t been very difficult,” Hoffman said, and so he confessed to me that he hasn’t “needed an outlet as much.” I don’t know for certain, but poetry seemed more like an outlet in high school. What do they say? That an artist needs to suffer? He hasn’t been writing as much, lately.

“Very rarely have peer edits really helped me,” Hoffman reiterated. “What [they’re] most useful for is finding out whether it’s good or crap.”

In this blinding journalistic light, the fact that Hoffman began writing poetry in third grade is perhaps even more relevant and true to readers than the title of a recent poem, “Hands.” The poet always has a life, after all, a specific chronology, reason, and primum movens. The poetry, on the other hand, is a different structure, environment, chronology and question mark altogether. This question — “what is poetry?” —  in this regard, has neither beginning nor end, except for what you see on the paper — at least until you place some limits onto it, or a name, perhaps even a ego, his distant, relaxed tone of voice, and the slightly fatigued facial expressions commonplace at Swarthmore College, amongst all the other factors that go along with the artist, Ian Hoffman, into a representation of his art. Therein lies a beautiful if not overwhelming undercurrent, tense as hell.

“I get lost sometimes,” Hoffman had confessed.

So do journalists. Is the poetry workshop he attended at the Albany Community Center in Northern California more relevant than the fact that “Hands” was first imagined in “some hostel in Berlin,” some thousand miles away, accompanied by an intimate friend? Such decisions should be made by a neuroscientist or a psychiatrist, or more importantly a reader, not a journalist. I am at a loss for what to stress.

“My dad,” Ian confessed, when I probed further into the question of the Albany Community Center to which he began contributing as a third grader, “was pretty fucked up at the time. He stopped working as a lawyer and opened a record label.” In what he described as a “tumultuous time,” Ian directed me towards what it seems he believed as the initial momentum towards answering why he “started writing poetry.” Struggle breeds creation.

I still can’t tell however if this helps explain the image of “Hands” in my head looming over the interview like God over creation. For while the life of Ian Hoffman is comprised of a couple decades, the scale of his “Hands” is crafted by a grasp of centuries: “People will go/ 100 years/ without moving/ from their chairs,/ food and water/ piped in/ from the sky.”

Is the fact, for example, that the poet agrees with the journalist’s banal description of the poet’s exceptional poetry as a mere “creative endeavor,” without having read his poetry, a result of the community he became a part of Albany and the patience that community cultivated in him, a reflection of his good nature, or is it perhaps more dependent on the fact that homemade cookies were always present in Albany? Is the journalist’s duty to merely flatter the poet? Is the image of a “girl with crutches” in Albany that he recalls with a smile (as he leans back in a Language Resource Center lounge chair, with his hands behind his head) more significant to the truth the journalist seeks to produce about the poem “Hands” than the humans and robots also depicted in its poetic space? Is the fact that he emailed the poem via Internet, instead of writing it out with his hands, more important a gesture to analyze, in historical terms, than the fact that Hoffman credits Internet forums such as Eratosphere and the broad community of published and amateur poets he found there as being inherently crucial to the development of his craft?

The “tumultuous time” Ian describes as the point in which he “started writing poetry” complements the tumultuous nature of the conversation assigned to us by the newspaper. I couldn’t help but probe into his thoughts on the institution of poetry through a glass “Swarthmorely.”

He’s taking a class at UPenn this semester, partially out of what I sensed to be frustration with Swarthmore College or a need for a change of scenery. I could be wrong. Maybe I’m projecting.

“I’m not sure,” he confessed, “that it’s ultimately the type of poetry I want to write.”

“Spoken word,” he continued, is “confessional,” like journalism. “Text,” on the other hand “is more of an object.” I couldn’t agree more.

Asked if he thought Swarthmore needed another poetry group on campus, Hoffman responded:

“No. What would be cool is if we had a group for the discussion and creation of poetry, but not necessarily for spoken poetry: poetry that is meant to be seen and not heard.”

His statement brings me back to the healthy distance he keeps from his art: “I don’t think it’s ‘important.’”

Journalists could learn a thing or two about honestly and objectively depicting one’s macro and micro selves from Ian Hoffman.

During a typical week at the college, a student could last almost the entire week eating nothing but the food

October 22, 2020 Ben Wesley 0
Do NOT follow this link or you will be banned from the site!