Sports » On the ball: Anthony Collard ’14 looks back 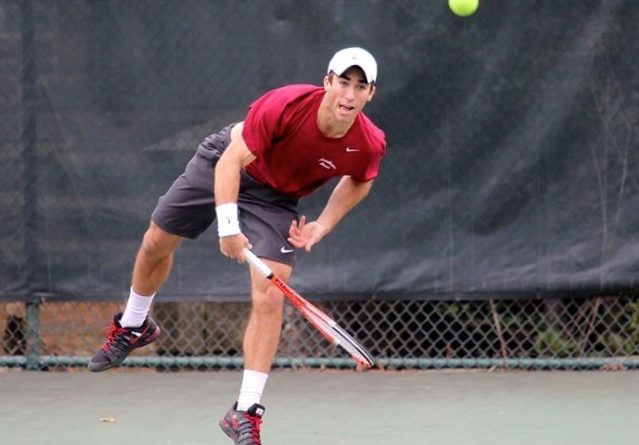 In his four years here at Swarthmore, Anthony Collard ’14 has developed into one of the tennis team’s best players. His leadership and poise on the court has helped the Garnet to an overall record of 10-7 and a 7-1 record in conference play.

In the words of coach Mike Mullan, “Anthony Collard has progressed as a tennis player for Swarthmore all four years. He motivates his teammates with well-chosen, sparse words backed by action.”

Preston Poon ’14 praises Collard for his attitude and ability to positively influence the team saying, “Anthony is always pushing those around him to work harder and encouraging everyone to give it their all.”

As the team’s top singles player, Collard has an individual record of 11-8, with only one of these losses coming in conference play. He also teamed up with Thomas Vernier ’17 for most of his doubles matches and the duo have accumulated an 11-8 record as well. None of their losses have come in conference play.

In discussing preparations for this season, Collard said, “To be honest, I didn’t change much from last season. I have always worked hard on and off the court in terms of training and lifting regimen.”

Collard came in as a freshman with plenty of talent and even more potential. He made an immediate impact, securing spots as the number six singles player and a number three doubles player. In that season he combined for a 12-4 record with a 6-1 record in conference play.

In his next season, Collard worked his way into the number two singles spot and posted a 9-12 overall record. It was in the 2012 season that Collard says he was a part of his most special Swarthmore tennis memory.

“The moment that will always stand out the most to me was taking down #4 Claremont as an unranked team during my sophomore year’s California trip in the most dramatic fashion. Down 4-0, we battled back to a 5-4 win, with the #1, #2 (myself), and #3 winning in three sets. This memory will always stick with me.”

It was in his junior year, however, that Collard really came into his own. He fought his way to the team’s top singles spot and collected a 12-7 overall record, winning his last ten matches. His success on the court garnered him recognition as Centennial Conference First Team and a #11 ranking in the Intercollegiate Tennis Association Atlantic South Region.

Even while coming off his individual success of last season, Collard says his goals and mental focus have never changed. Describing his attitude entering into this season, he said, “I never set out with individual goals. From the get-go, my attitude was to help put the team in a position to make NCAAs. We are currently on that path, as we have made the Centennial Conference playoffs.”

On his development over his Swarthmore career, Collard gives a lot of the credit to his coach. Mullan, one of the winningest coaches in college tennis and in his 37th season here at Swarthmore, has consistently molded players into highly successful competitors. Collard acknowledges both Mullan and the men’s assistant coach Josh Schofield, saying, “Mullan is a great coach, and has championship banners to prove it. So it has been a privilege to work under his tutelage. I think Mike and Josh did great work molding me into a more offensive player, as well as a doubles player.”

However, Mullan is quick to point out that it is just as much Collard’s individual effort that has gotten him to this point. “He works on his strength and conditioning off court. He seems to dwell in the tension of athletic competition and plays hard, treating winning and losing as two sides of the same coin,” says Mullan.

Poon echoes many of the sentiments Mullan addresses. What makes Collard so special is not only his hard work, but his emotional leadership.

Poon says, “Anthony is an emotional leader and helps set a positive tone for every match. His constant energy, despite winning or losing, and enthusiasm naturally pumps up those around him and helps contribute to better results for the team. We have a core group of seniors that Anthony is a part of that the rest of the team looks up to and comes to for guidance both on and off the court.”

While the past four years of success have been sweet for Collard, for him it has all been an added bonus to a great experience. What have stood out most in his mind is the friends he’s made and the relationships he’s developed.

Looking back on his tennis career, Collard says, “It has been everything I could have hoped for in terms of results, atmosphere, and camaraderie. Over the past four years, we have been a nationally ranked team and made it to the finals of the conference championship. So I am proud of our accomplishments. What I am the most grateful for, however, is the camaraderie on the team. I was lucky enough to come in a class of five new players, so spending four years playing alongside these guys has been an absolute pleasure and honor.”

While the men have clinched a spot in the Conference Championships, they conclude their regular season at home against Haverford on Saturday, April 26.