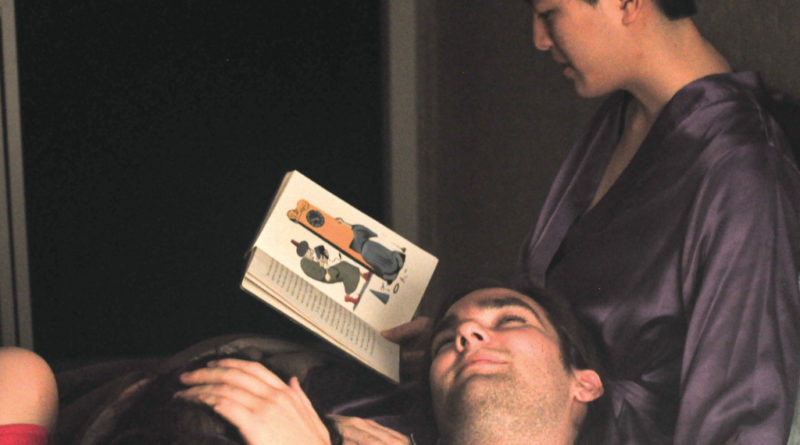 For months, the cast of the upcoming play, “Lex & Goldaline” have been crafting a unique, immersive theater experience. “Devised theater” is a play that is not written, but rather created through a series of brainstorming exercises. In the spirit of this genre, the cast has been writing about various themes and workshopping their ideas into skits. The result is Sam Swift Shuker-Haines ’14’s senior thesis, a story of love, sisterhood and the discovery of sexuality through the play’s two sisters and title characters, Lex and Goldaline. The play will be performed from April 11 to 13 in Lang Performing Arts Center with a total of seven showtimes.

Unlike a conventional play, Lex & Goldaline allows for group input on the final product.  In this case, Shuker-Haines instructed the actors to write based on a prompt such as “the face outside the window.” Using that suggestion, they improvise scenes. At one point, they begin to put things together and make their improvised scenes into a cohesive play. The rehearsal process began last semester. Since then, the group has had several rehearsals a week to prepare for the show.

The play is set in a house which the stage crew built specifically for this play. There are two rooms in which two different scenes occur simultaneously. In one setting, the nuclear family includes Lex and Goldaline who live with their mother and father, and the scene covers a four-year time period. The invented family displays an older Lex, Goldaline and Goldaline’s lover over the course of one morning when the parents are out of town.

In the confines of this house, the audience watches each half of the play but is also able to hear what is happening in the other scene as well. While this aspect has been a significant design problem for Shuker-Haines, it has allowed for the exploration of the themes of voyeurism and the strange passage of time. The audience experiences the rarity of looking into the intimacy of family life while being placed in a world where time does not act conventionally, often moving backward or standing still.

This work is Shuker-Haines’s largest, most involved work. Shuker-Haines has been in a few devised pieces and has worked on several during their time at Swarthmore. Shuker-Haines enjoys devised pieces because of the formation of each play. They compared the manuscript format of traditional plays to   a blueprint — only the bare-bones of a performance. To Shuker-Haines, a play is not the text itself, but the act on stage. They said, “Devised theater allows you more than theater to forget about the text and stop allowing the text to get in the way of the meaning. Text is tyrannical; when you watch a scene and a character says something, everything else gets interpreted through that line.”

The process has allowed for more input from the cast of characters as well. Doriana Thornton ’16 plays the older version of Lex in the devised family. Thornton said they prefer devised theater because it “allows the show to be more creative. I like to be able to know that I’ve had a chance to influence the show and put myself into it. It’s interesting to see how different things that each cast member does come together and help create this play.” Thornton has also been able to put a large part of themself and their childhood experience into the character of Goldaline.

Leonie Cohen ’16 plays the younger Lex. She said, “It’s been a cool process that allows me to put so much more of myself and my expression into the play.” Cohen has never been in a devised piece before, though she had some acting experience in high school. For Cohen, the hardest part of playing her character has been the variety of Lex’s age. In the nuclear family, Lex begins as a newborn and ages throughout the play. While it is a struggle to portray a range of ages she said, “Apparently, I’m really good at crying like a baby. At one point I need to be carried which is hilarious and kind of disconcerting.”

However, while devised pieces do offer a purer form of expression, this process accompanied by risks. Shuker-Haines said, “The problem can be that you never know what’s going on. There’s not a clear sense of where you’re going until you’re pretty far in. We’re still rewriting the script and constantly changing things. You kind of just have to have faith in the people around you and in yourself.”

Through this one hour experience, Shuker-Haines said they “want people to get transported to a world where time works differently and to come out of it with a better sense of what’s happening behind people’s windows.”