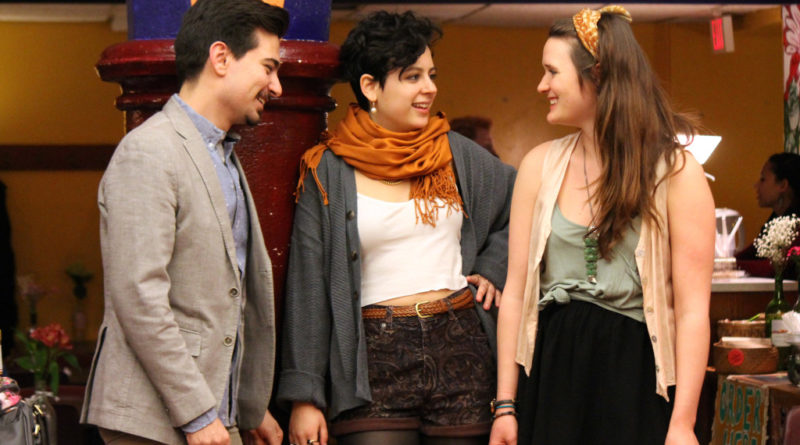 When I walked into Paces for my training as a server, Michele Gugerli ‘14 explained that, as front of the house staff, I was expected to dress nicely. My combination of vintage dresses and weird children’s clothes ended up going over well. “Dress nicely” is a relative term, and, at Paces, the conception of house aesthetic is important but unconventional. This week I talked to Gugerli and Sinan Kazaklar ‘14, members of the café’s management team, about the Paces aesthetic, with its cohesively hipster undertones and unusual, diverse overtones of daily style.

Gugerli explained, “between Sinan, me, Josh and Treasure [Paces senior management] there is a pretty cohesive look.” Just looking at the individuals sitting in front of me, any cohesion of that look seemed tangential. Kazaklar described his look as “prepster,” and as a bit unconventional but polished, with a growing emphasis on quality, while Gugerli expressed love of multitudes of layered patterns, of the cheap and the almost-ugly.

I began to understand the cohesion better as Gugerli and Kazaklar described a game Gugerli plays daily, in which she names her outfit and gives it a back story. These stories feature an artist running out of the studio for a coffee break or, in another, simply a grungy girl. Recently, the game has expanded to include Kazaklar. A few days ago, he was an investment banker on a weekend picnic with his girlfriend in Central Park. All of the narratives have in common a playful enthusiasm and interest in style as communicative of story.

Their playful approach to something they clearly care about and take seriously shows Gugerli’s and Kazaklar’s hipster leanings with regard to their style. Cohesion of aesthetic at Paces comes not from identical personal styles amongst the management, but from this melding of fun and thoughtful care, and its resulting “café culture” brand of hipster.”

I would define café culture as intellectual, but not overly serious or concentrated, and cool, but simultaneously warm and welcoming. The café culture brand of hipster embodies these values. It is your classic hipster minus the pretension and with a more genuine sense of humor. The sophistication of Kazaklar’s perfectly tailored blazers and and Gugerli’s piles of grandma jewels and scarves fit in equally well, combining cool with thoughtful, warm and fun.

There is a history to the hipster presentation of Paces. “Paces today has been influenced by the legacy of its directors, who were predominantly hipsters … certain people want to be the directors of Paces and work at Paces because it has a certain vibe, and so over time that’s become the stereotype, that the paces directorate team is often just a group of good looking hipsters.”

A community of hipsters most certainly breeds originality. But Paces is also a business, so that originality is placed within the confines of what it dictates is appropriate. These are the stipulations for front-of-the-house dress: “it doesn’t necessarily matter how you’re dressed, but we always emphasize that you should be dressed well. And that’s a service element. You don’t want a server who looks like they’ve just rolled out of bed … it doesn’t matter what your style is, but when you come to work, you should be killing it.”

Kazaklar noted some of the little details across the space that, in addition to staff clothing, comprise that presentation. “We painted the new chalkboard, for example — the colors, the things at the top. And we have the mural behind the bar, even the flowers we buy every week.” I would add to these aesthetic augmentations the colorful walls, the little candles on each table and the student artwork strung around the room.

Gugerli explained the hope for the combined product of these details: “We are going for something a little indie, a little comfortable, some vintage elements — and that, to me, is just because it’s warm and comfortable and welcoming.” The effort that goes into presenting this image is impressive. But because, in presentation, it comes from the genuinely quirky dressers Paces café culture continually attracts, the effort avoids feeling contrived. And Paces sees the advantage of its workers’ demographic. “We like people who dress quirkily and have their own style, because its part of that image of Paces as being a bit quirky and independent,” Gugerli said.

The form the quirkiness and independence at Paces take now is not necessarily forever. Kazaklar and Gugerli, half of Paces management staff, are both seniors, and leaving Swarthmore at the end of the semester. The aesthetic at Paces has, and will, continue to develop under new management. “The atmosphere always changes over time. If the campus decides it needs a space that looks and feels different, that’s fine. It was very different my freshman year … I like the aesthetic Paces has now, if the next directorate staff wants to edit it, I don’t mind that, as long as the service and the food keep staying on that upward trajectory.”

In a space with as pervasive and aesthetically embodied a culture as Paces, however, aesthetic change happens over time, in a process Kazaklar described as “additive as opposed to substitutive … [Change at Paces] has always been building on what existed already.”

As members of management poised to leave behind Paces and the culture it embodies, Gugerli and Kazaklar contemplated the position they might find their personal aesthetics in in the context of the outside world.

For Kazaklar, whose aesthetic stands on the far side of the clean-cut at Paces, entering the grown-up world doesn’t pose much expectation of change: “I think I’ve reached a plateau, and the kinds of changes [to my wardrobe] are little tweaks, like try this out and see what people think about this, as opposed to throwing my wardrobe away and seeing what happens. It’s more, ‘let me try this pattern, let me try matching this with this.’ It’s always going to be a bit unconventional, polished, look — bougie-esque, as Michele [Gugerli] would call it.” It is not exclusively attached to Paces or college in general, and so will carry its present form largely onwards.

For Gugerli, whose style has been more formed by the realities of college liberalism, leaving does involve some anticipation of change. “To an extent, my style is going to have to evolve, because Swarthmore is very body-positive, and it doesn’t necessarily matter how revealing your clothing is … a lot of my style has come out of the fact that Swarthmore has this huge degree of freedom of what it is acceptable to wear.” Change is not in the spirit, but the details, of dress here. The acceptance of creative eccentricity at Swarthmore in general, manifests at the café.

There is immense freedom, and even encouragement, to dress in unexpected ways at Swat in general, as well as Paces, which does not necessarily exist elsewhere. Taking advantage of that freedom is a luxury Paces liberally and thoughtfully indulges in. And that indulgence provides, at least for Gugerli, a very real pleasure. “That’s something that sometimes frustrates me about Swarthmore … I do sometimes wish that people would make more of an effort when putting an outfit together, because there’s a certain level of self-care in it. I want Swatties to treat themselves!”