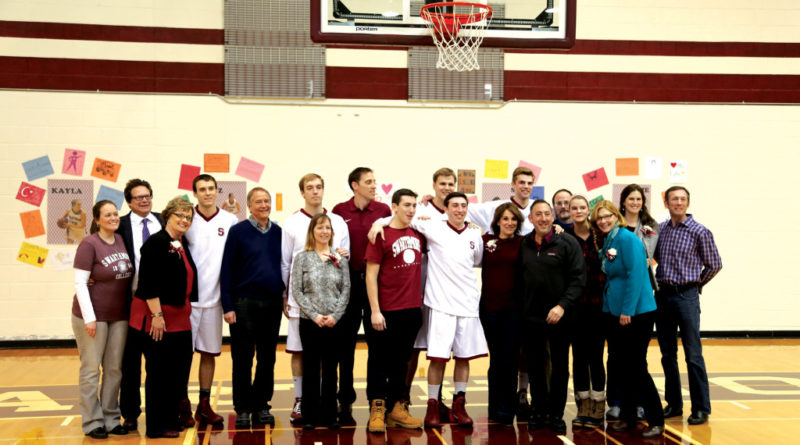 Haverford battled back, however, and would eventually go up by a score of 30-26. With the help of Stephanie Lechich ’14 and Kayla Moritzky ’14 the Garnet fought back to reclaim the lead before the half was over. The women took a 31-30 lead into the locker room.

Haverford came out of the locker room hot, building a lead that would reach 11 points. The Garnet did not give up, though, and battled all the way back to a tie when Moritzky drained a three-pointer with 23 seconds left to play, sending the game into overtime.

Just as they did after the half, Haverford came out strong at the start of OT. Haverford scored a quick six points and the Garnet were not able to match, falling by a final score of 67-59.

Saturday was also Senior Night, in which the Garnet recognized Moritzky, Lechich, Liz Casey ’14, and Katie Lytle ’14, with their families before the game began.

Looking back, the Swarthmore women’s basketball team finished with an overall record of 13-11 with an 8-10 record in conference. Some of their highlight wins include victories over Muhlenberg and Johns Hopkins. For the seniors, it was their first victory over Hopkins and it was made all the more memorable for the fact they crushed the Blue Jays 75-47 on their own court.

The senior class was very accomplished and helped get the program where it is today. The team finished second in the conference last year, falling in the championship game by a mere two points. The women also garnered the school’s first ECAC championship last year. The seniors again led the team to another winning season this year, falling just a few games out of playoff contention.

Other highlights include personal achievements. Elle Larson ’15 eclipsed the 1,000-point mark in the big win over Johns Hopkins, making her only the tenth woman in school history to reach this milestone. Moritzky broke the 27 year old school record for assists by reaching 350 this past Saturday.

Lytle was recognized by the conference for her outstanding play many times throughout the season and currently leads the conference in points per game, rebounds per game, and field goal percentage. She also amassed her 50th career double-double on Saturday. Additionally, she reached both the 1,000-point and rebound mark for her career, making her the fourth woman in school history to crack 1,000 rebounds and only the third to reach 1,000 in both categories.

For the seniors it was an especially bittersweet day. Knowing it could be their last game depending on the results of the ECAC bids, the players looked back on what has been an incredible past four years.

Lechich looked back on her four years with pleasure. “I am so grateful for the experience of playing a game that I love with such talented, amazing people at the collegiate level and being able to learn about myself and other people,” she said. “Before the game, I thought to myself, just have fun and play your heart out: in honor of all of the training, in honor of basketball.”

Casey was also grateful to have been able to play on the basketball team for the past four years of her life. “I feel like I really had an opportunity to be part of something special. Our class was key in transforming our program over the last four years.”

Men: Seniors persevere in a time of transition

Men’s basketball sent their seniors out on a high note Saturday. Playing their rival, Haverford, the men’s team was able to combine for 80 points in way to a rout.

The first half of the game was well-played by both sides. The score swung back and forth and no team led by more than eight points. Swarthmore was able to build small lead midway through the first half, but could not hang on to it. Haverford eliminated the deficit and led until Karl Barkley ’15 hit a three-pointer with two seconds left on the clock. Barkley and Chris Bourne ’17 lead the team with eight points each at the half.

The second half was a different story. The Garnet went on an 11-2 run a few minutes into the second half, forcing Haverford to burn two of their timeouts. From this point on the game was never really in doubt. Swarthmore piled onto their lead and used another 11-2 run later in the half to put the game out of reach.

Joe Keedy ‘14 really appreciated the way the basketball team was able to come out on top Saturday. He said, “I couldn’t imagine a better way to go out than a big win over Haverford in front of family and friends.”

In their final game for Swarthmore, seniors Joe Keedy ’14, Jordan Federer ’14, and Jay Kober each contributed 17, 6, and 10 points respectively. Keedy also recorded 12 rebounds to give him a double-double.

The Garnet finished with an overall record of 8-17 with a conference record of 5-13. They finished 7th in the conference and have improved in each of Coach Landry Kosmalski’s first two seasons.

The team’s biggest win came against 6th seeded Gettysburg early in the season. On an individual level, Kober recorded his 1,000th point in the same victory over Gettysburg.

It has been an interesting ride for this year’s seniors. They have been through a lot when it comes to program and coaching changes. They have had to overcome challenges and fight against every team they were pitted against. Through it all, these past four years have left their mark on the seniors.

Davis Ancona ’14 reflects back over his career, saying “I’m not sure I could really put it into words, but it has meant a lot to be a part of the team these past 4 years. Our class especially has seen a huge change in the program. We’ve had 3 different coaches in 4 years, but still came back determined every year to get better and play the game we love.”