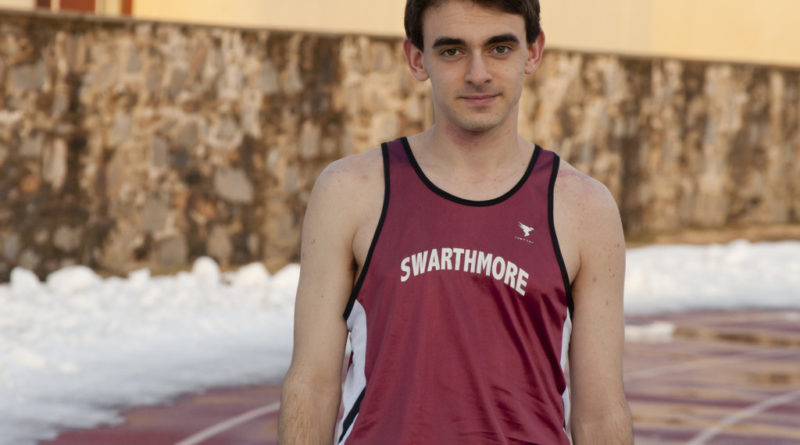 For Jonas Oppenheimer ’15, the past month has been something special. The distance runner has set two individual school records, in the 800m run and the mile, and has helped his 800m relay team set a third record.

Oppenheimer’s performances are a testament in part to his natural ability. Coach Pete Carroll called Oppenheimer “talented,” adding that “he has more speed endurance than anyone I have coached here.” Carroll’s comment about Oppenheimer’s unique combination of speed and endurance is especially impressive. 800 meters is roughly half a mile, making it much closer to a sprint than the more endurance-focused mile. Oppenheimer’s record-breaking times of 1:55.28 and 4:17.77 showcase his ability to succeed in two very different events.

While natural talent certainly has played a role in Oppenheimer’s success, Carroll is quick to emphasize that, “the major reason Jonas is running so well at this point is a reflection of all the hard work he has put in in the last 18 months.” According to Carroll, Oppenheimer maintains his endurance by running 80-85 miles a week.

Oppenheimer’s teammates have also noticed his work ethic. Stuart Russell ’14 called Oppenheimer’s performances “a direct result of his work ethic and dedication.” Russell points out Oppenheimer’s understanding that being a successful runner is about more than running 85 miles a week. Doing the less-noticeable things is important, too, and according to Russell, this is the area in which Oppenheimer most excels. Russell praises Oppenheimer for being “one of the last people to leave practice every day because, after he is done running, he spends an additional hour or two doing strides, core, rolling, stretching and all of the little important exercises that give you the extra boost.”

Oppenheimer’s dedication to these health maintenance exercises reflects what he has learned from a string of injuries that plagued him throughout his first two years. Teammate Richard Scott ’15 points out that “[Oppenheimer] has overcome his fair share of injuries during his time at Swarthmore. He is really good at taking care of himself and making sure that getting back to the sport is his number one priority.”

Oppenheimer exhibits this attention to detail on race day, too. He explains that he is careful to eat well before races, saying that, “I like to hydrate and get in a balanced meal before races, so that usually means hitting Sharples the night before and morning of [races].”

When someone who is known for working as hard as Oppenheimer enjoys success, it helps the entire team by providing a stark example that dedication really does pay off. Russell describes Oppenheimer’s work ethic as “an excellent example for younger runners on the team.”

Carroll calls Oppenheimer “an example setter” who will have “no excuses and get out there and train, even if it is 15 degrees and snowing.” This example is critical to motivating the team’s younger members, a point not lost on Russell, who lauds Oppenheimer for “demonstrating to the underclassmen what sorts of performances you can have if you put in the hard work.”

Looking ahead, Oppenheimer has ambitious personal and team goals. Along with performing well in the Centennial Conference championships and qualifying for nationals, Oppenheimer stated that, “One of the main things I’d like to accomplish before I’m done running here is qualifying a cross-country team for nationals.”

This goal is instructive because it shows Oppenheimer’s commitment to his teammates. Track and cross-country may appear to be individual sports and in many ways, they do revolve around individual athletes. However, track athletes, just like any other members of a team sport, feed off of each others’ energy and success. Oppenheimer is keenly aware of this aspect of the sport, noting that, “running cross-country resonates because it is a team sport at its core.” Oppenheimer’s love for the team aspects of the sport is exemplified by his final athletic goal. Oppenheimer says that he “can’t imagine a better way to go out than competing at the national meet with my teammates.”

Between Oppenheimer’s work ethic, the example he sets and his ability to push teammates, it is clear that his records represent more than just an individual achievement. These results raise the bar for all of Oppenheimer’s teammates, making the team as a whole more competitive. In many sports, it is said that a superstar is one who makes the players around him better. Oppenheimer has transcended the individual elements of track and cross-country to do just that.