Sports » Season » Winter » A grand week for the Garnet 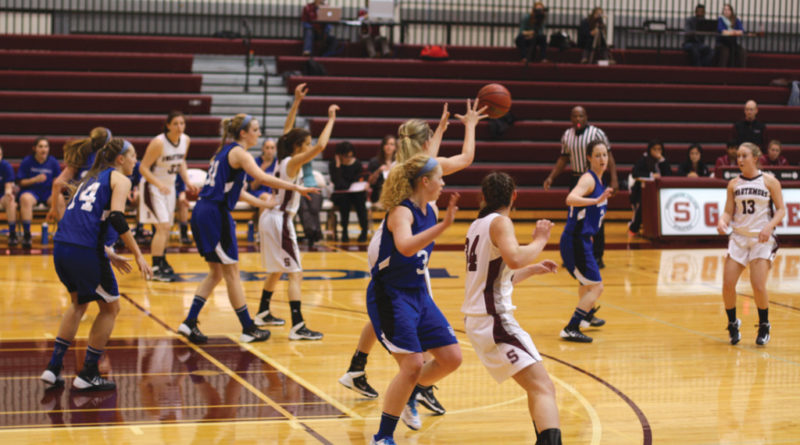 When Elle Larsen was fouled attempting a shot early on in last Thursday’s game at Johns Hopkins, the junior forward stepped to the line knowing that more than just a couple of free throws were on the line. Having already scored points 998 and 999 in the game’s opening minutes, Larsen stood just one point away from joining teammate Katie Lytle ’14 and eight former Garnet women in the prestigious 1,000-point club.

After missing the first free throw, the Lancaster, Pa. native focused on making the second shot. Larsen described the moment, saying that, “I just took a deep breath and told myself, You only have to make one.” Larsen did just that, swishing the second shot and setting off screams of jubilation, none louder than those from her family, who as Coach Renee DeVarney pointed out, “drove through a snowstorm from Atlanta and made it to Baltimore to see it happen.”

Larsen’s milestone, accomplished in just her third year on the team, is testament to the consistent contributions she has made throughout her Swarthmore career. A three-year starter, Larsen has ranked in the top three in scoring each season, averaging 12.5 PPG her freshman year and 13.3 PPG as a sophomore. This season has been Larsen’s best yet. Her 16.9 PPG put her in a tie with Lytle for tops on the team and second in the Centennial Conference, while her 7.2 RPG is a career-best pace. DeVarney described the peace of mind that comes with having a strong post player. “Having a player on the team like Elle, a solid low post player, it gives a coach confidence. My thought is, Okay, the other team has a good post player, but we have Elle so we will be all right,” DeVarney said.

While Larsen’s numbers have been strong every year, they also suggest a consistent year-to-year improvement, a fact that has not been lost on her teammates or her coach. Point guard Kayla Moritzky ’14 described Larsen’s improvements, commenting, “She has been a great player since she got here but every year she adds a new skill and becomes more and more reliable.” DeVarney too lauded Larsen’s development, saying, “Each season her balance and strength has kept improving. A team motto is 1 percent better every day and Elle has displayed that.”

With Larsen’s continual improvement has come increasing responsibility. Larsen has earned the respect of her teammates and coaches alike, earning the honor of being named team captain for this season. DeVarney was particularly impressed by how Larsen has learned to channel her emotions into positive energy: “Elle plays with a lot of passion and emotion and each year she has done a better job of focusing that emotion and passion in a positive way.” Lytle agreed, noting that Larsen “is aware of setting a good example for the underclassmen and frequently gives words of encouragement to the team.”

Following the positive examples set by Larsen and Lytle, Swarthmore’s younger forwards have made substantial strides this season. Abbey Deckard ’16 and Maggie O’Neil ’17 are both averaging more than 6 points and 3 rebounds per game, lending much-needed support to the high scoring duo of Larsen and Lytle.

Now in their third year of starting together, Larsen, Lytle and Moritzky have developed an impressive chemistry that has pushed both Larsen and Lytle over 1,000 career points, while Moritzky stands just 13 assists away from the program record of 345. Both Lytle and Moritzky spoke highly of how Larsen complements their playing styles. Lytle described the challenges she and Larsen together pose to opponents: “Although Elle primarily posts up and I play more on the perimeter, she can also take her defender off the dribble and I can play inside. This gives us an interesting dynamic because we can run a variety of plays to force the defense to make a decision on who to guard.” Moritzky agreed, adding, “Elle and I have an understanding that if she gets down the court and gets open, I’m going to get her the ball and she will score. She is one of my favorite players to play with.”

Adding to the sweetness of Larsen’s 1000th point is the fact that it came amidst a string of four straight victories that has brought the previously struggling Garnet to within a game of a playoff spot. The Garnet has caught fire from the field during this stretch, shooting over 45 percent. Larsen has been at her best during, averaging 20.8 PPG, while Moritzky has dished out 6.0 APG.

Moritzky cited Larsen’s accomplishment as boosting the team emotionally, saying, “the momentum that moment gave the team against Hopkins was one of the turning points of that game.” Swarthmore rode that momentum to a 75-47 season against a Blue Jays team that came into the game with a 10-2 record and had downed the Garnet 12 consecutive times.

Larsen was not the only Garnet player to reach a difficult milestone last week. Lytle became a member of the 1,000 point, 1,000 rebound club by recording her 1,000th career rebound in Saturday’s 64-50 victory over Franklin and Marshall. “I have always taken pride in rebounding,” the preseason All-American said. “Unlike shooting where there is always the chance of an off game, being an active rebounder is something I know I can do each game.”

While Larsen is happy with the milestone, her sights are focused squarely on the team’s objectives. “I hope to do whatever my team needs me to do to win us a championship,” Larsen said, adding that although “I would love to eclipse 1,500 points and maybe even 1,000 rebounds for the rest of my career, ultimately all I want is for us to be champions.”

Swarthmore has three remaining games as they try to complete their playoff push. After traveling to McDaniel on Saturday, the team will conclude its season with home games against Washington College (February 19) and Haverford College (February 22) at Tarble Pavilion.

As for that free throw in Baltimore, Larsen reflected on the gravity of the moment: “What happened last week was truly an amazing moment. I feel so blessed to have finally accomplished this, and to be among some really incredible players. To be able to do this while my teammates Katie, Kayla, [Elizabeth Casey ’14] and [Stephanie Lechich ’14] are still on the team is something that I’m incredibly thankful for, and that I will never forget. They have been with me the whole way through, and it wouldn’t have been the same without them.”