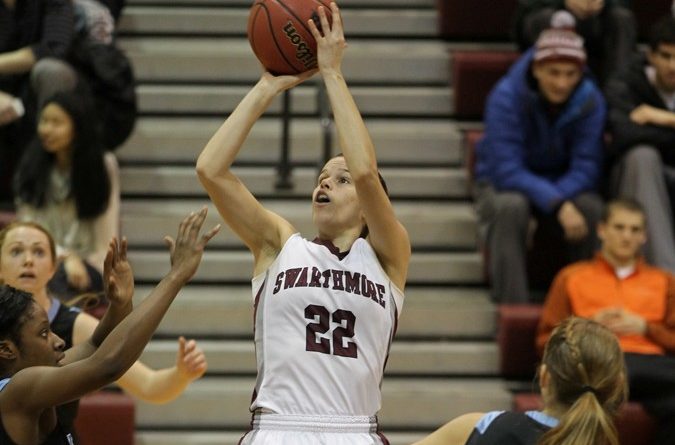 Since beginning the season 4-5, the women’s basketball team has won four of its last seven games with two of those wins coming within the conference. While most students were home for break, enjoying the time off from school, the women were hard at work: the team played a total of six games, beginning January 2nd.

After a somewhat disappointing start to the season, the team hopes that their winter break success will be a launching pad into the second stretch of the season. As to the secret of their post-break streak, forward Katie Lytle ’14 said, “the biggest contributing factor to our recent success is we are starting to mesh as a team.” The team is beginning to play more cohesively as starters settle into their roles and the underclassmen become more confident in their abilities. Lytle also adds, “we have become better at executing our offenses and have improved our communication on defense, which has made our press more effective.”

The team began their break in sunny Pasadena, CA where they took on Cal Tech. In a strong 97-80 victory the team combined to shoot a season high of .535 and were 12-19 from behind the arc. The Garnet scored 12 of the game’s 16 first points and held a lead as big as 28 points. Elle Larsen ’15 scored a game-high 27 points and was backed by an impressive all-around performance by Lytle.

The women then returned to Pennsylvania where they took on Franklin & Marshall the following week. Stephanie Lechich ’14 stepped up big time for the Garnet, totaling a career-high 16 points and leading the team to a 63-55 victory. Both teams struggled to score in the first half of the game, setting up a second half battle. It was here that the Garnet went on a 15-3 run to ultimately seize control of the game and secure their second conference win.

The next team up was Bryn Athyn. This was the ladies’ first home game in more than a month and they made it count. The team was in control for most of the game. While tight midway through the first, the Garnet went on a 9-0 run and never looked back. Larsen led the scoring with a 19 point onslaught, getting help from Lechich, Lytle, and Maggie O’Neil ’17.

This 3-game winning streak marks the longest winning streak for the Garnet women thus far.  What is most impressive is that two of these wins came on the road. When asked about the team mentality heading into road games, Kayla Moritzky ’14 says, “we need to win.” The team knows how important each and every game is and it is no secret as to how hard road games can be. Heading into road games, especially those in conference, with an added chip on the shoulder has helped the team garner an above .500 road winning percentage.

The team rode this three game winning streak into a matchup at home against McDaniel. Both teams came out strong and the scoring was back and forth for most of the game. The Garnet were up by as much as nine in the first half, but only held a three point lead going into the locker room. The team led for most of the second half but could not withstand the three-point shooting of the Green Terror. Lytle, Larsen, and Moritzky all finished with double-digit points, but the Garnet fell 61-57.

After the tough loss to McDaniel the team rebounded quickly with a well-fought win over Muhlenberg. O’Neil dropped a career high 19 points, with 14 coming in the first half. It was a seesaw battle through the first half with ten lead changes and a lead no greater than six points. Muhlenberg went on a 10-2 run late in the first half before Swarthmore went on a 10-2 run of their own. The Garnet were able to extend their lead to 10 at one point in the second half and never led by fewer than 4 points the remainder of the game. Just as important as the offense in this game was the Garnet’s ability to stop the three; Muhlenberg was 0-8 from beyond the arc.

Following a great conference win, the women traveled to Gettysburg to take on the defending champion Bullets. The Garnet got off to a very slow start, shooting just 20 percent from the field and not connecting on any three point tries in the first half. Down ten at the half, the Garnet made it a tough battle throughout the remainder of the game. With contributions from Larsen and Lechich, Swarthmore was able to cut the deficit to just one. Unfortunately, the Bullets mounted a rally of their own and went on an 8-0 run to seal the victory.

Despite losing two of their last three games, the team is confident in their ability moving forward. They currently sit 8th in the conference with a conference record of 3-7. The team is, however, only three games out of a playoff spot and, with eight games remaining, have plenty of time to mount a comeback. If they hope to advance, they will likely have to rely on the strong front line of Lytle and Larson. The pair has dominated opponents all season, with Lytle in the top two in the conference in points per game, rebounds per game and field goal percentage and Larson ranking in the top ten in the same categories. Lytle has earned several honors this season already, including four Centennial Conference Player of the Week awards.

Their next game is Saturday at home against Dickinson. Tipoff is at 1:00 p.m. in Tarble Pavilion. Dickinson is currently ranked last in the Centennial Conference with no conference victories and an overall record of 3-11.