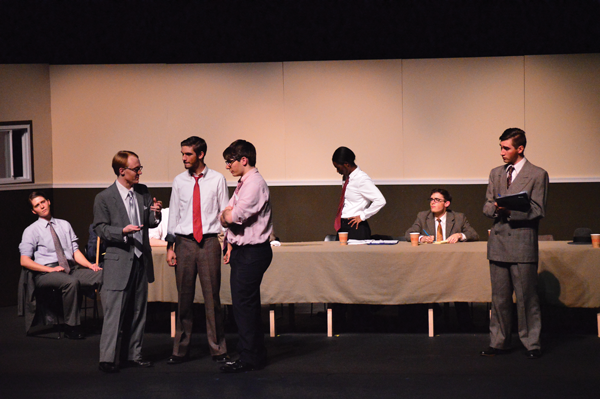 “12 Angry Men” opened last weekend on a sparse, simply-lit set in LPAC, marked only by a window, a door and twelve chairs. In this tiny, claustrophobic room on the “hottest day of the year,” twelve men debated the fate of a young boy on trial for murdering his father.

On a fundamental level, “12 Angry Men” was a courtroom drama — but a frightened teenager wasn’t the only one on trial. The play examined and critiqued the American judicial process, from the principle of reasonable doubt to the purported belief that a defendant is innocent until proven guilty. At the start of the play, a judge (Anushka Mehta ’15) walked in and implored an unseen jury to “separate fact from fancy” to come to a unanimous decision in what appeared to be an open-and-shut murder case. When the twelve jurors piled into the room, the vote was disrupted by a lone dissenting voice. Convinced of the boy’s innocence, Juror 8, played by Abigail Henderson ’14, persuaded the rest of the group to re-evaluate the evidence and reconsider the conduct of the trial.

Tensions mounted from the very start of the play as personalities and prejudices were slowly revealed. The room’s stifling heat mirrored the growing conflict — raised voices and heated outbursts were punctuated by light background chatter and frequent trips to the water cooler. Evidence was hotly debated, and as the audience, we learnt more and more about the details of the case through these discussions. We saw the weapon that was used to kill the father and learnt about the details provided by the witnesses through Juror 8, who systematically and thoroughly worked through the case.

Henderson brought a reasoned, sensible voice to the arguable protagonist of this play. Working in opposition, a vitriolic Juror 3 (Dan Eisler ’15) remained convinced of the defendant’s guilt. In a confined space like this one, body language was paramount, and Eisler took full advantage of this by pacing around the set furiously. The physical conflict came to a head right before intermission, as Juror 4 (Jay Clayton ‘16) struggled to hold him back from attacking Juror 8.

As the play progressed, a host of undecided, neutral jurors were forced to confront the arguments put forward by Jurors 3 and 8 and come to terms with the fact that a life lay in their hands. Preston Cooper ‘15 effectively played the part of an elderly juror who struggles with his own sense of guilt about his past while examining the repercussions of his decisions. At the same time, Abby Holtzman’s juror, hesitant at first, gradually gained a louder voice in the second act of the play. Meanwhile, Juror 11 (Matthew Goldman), an immigrant, appealed to the power of discourse, one of the “wonderful things about democracy.” Slowly but surely, each man overcame his certainty of the accused’s guilt.

Directors Mehta and Sara Morell ’15 made an interesting decision to have the defendant (Arya Palukurthi ’14) present on stage throughout the play. While the script says nothing about the reality of the boy’s guilt, this decision pointed compellingly to his fear and desperation, reminding the audience that a human life hung in the balance of the decisions made by the jurors.

“12 Angry Men” grew in depth as it progressed, probing important moral issues like racism and classism. While the actors had a good rapport that intensified the volatile atmosphere on stage, faster pacing would have animated the dialogue considerably. A sparse but sufficient soundtrack illuminated key moments of the play, heightening the drama and increasing suspense. Simple, consistent lighting left my attention concentrated on dialogue and didn’t distract from the key themes at hand. While the directors made a decision to leave the play set in 1957, it left me thinking about the relevance of issues like bigotry, justice and xenophobia that continue to haunt the judicial process today.

In recent months, we have seen calls for “peace” and “civility” aimed at the Black Lives Matter movement. The argument

September 17, 2020 Sofia Frumkin 0
Do NOT follow this link or you will be banned from the site!