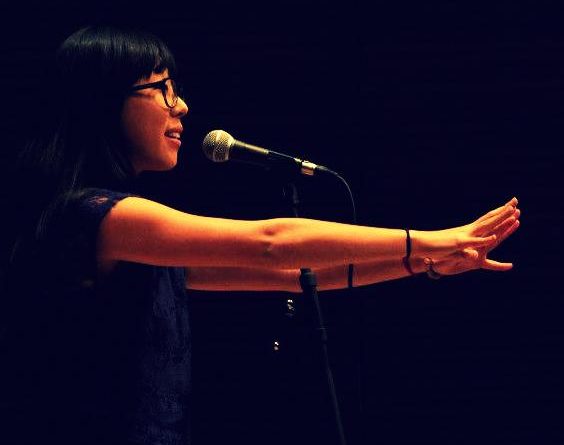 Fatimah Asghar takes center stage to deliver the opening poem, “Pluto Shits on the Universe,” of the collaborative spoken word performance she and Franny Choi would present in honor of Women’s Week and API Heritage Month last Saturday. “Oops my bad,” it begins, and it soon becomes clear a personified Pluto is not happy with its victimization by scientists who just can’t seem to categorize it. “I chaos like a motherfucker!” Pluto screams. “My name means hell … bitch. I am … hell … bitch!” she bellows. Her audience, a group of 30 Swatties and administrators, piled into the seats of old-school fold-out desks in the tiny Lang Center Presser Room, are silent, jarred. “Neptune?” she asks, “That bitch slow.” Her voice echoes against the hollow walls as she rants, “Fuck your order. Fuck your time!” After a plethora of insults against time, Earth, the moon, scientific inquiry — the very ideals we cherish — she pauses, looks around at her audience, and ends without remorse, “Oops… my bad.” Breaking the persona, she flicks her hair, a curly pixie cut, and re-adjusts her purple blazer, as she humbly thanks her audience for listening. There was no doubt at the end of her poem that Pluto had just shit on the Universe. Much in line with her poetic style, one that is “austere … and very straightforward,” Asghar, frustrated with how Pluto was too often portrayed as lonely and as a victim of displacement, twisted the story, granting the not-so-planet agency. “Why would Pluto care about what the Earth thought about it?” she asks.

Franny Choi steps up in her hipster glasses and a fashionable poncho, and, delivers “Open Letter from Jessica Alba” to her snickering audience. Her delivery, in stark contrast to the fiery Pluto that preceded her, is informal, laid back. Inverting celebrity status, Franny constructs a dialogue between Jessica Alba and her father, Dr. Choi. Franny’s Jessica Alba, the kind of actress who wears “sexually-repressed Nerd Chick glasses” in all of her “heroine” roles, marvels at the fame of Dr. Choi. Congratulating him on his winning of “Who Wore It Better: Lab Coat Edition,” Jessica laments her pointlessness and envies the strides he makes in science. Laughing at her herself midway through the poem, Franny becomes Jessica Alba. This poem, in its unique blend of a fun nature and satirical tone, is a bitter critique of popular culture. As an avid consumer of entertainment news and of all that is Hollywood, I at once possessed the cultural capital to understand her references, and thus share in the jokes, but was also overtly aware of how my obsession is misguided. Walking off stage, Franny left everyone wondering, Why do I know who Jessica Alba is and why is this funny?

Profane? Excessively. Silly? Arguable. Undeniably, these two poems, characteristic of the other poems performed, are not concerned with any notions of respectability and instead delve into the controversial, the private, the vulnerable, the taboo. Handling all from the sudden loss of a lover to the beauty of menstruating, these two little women in an hour-long slam explored, as Asghar puts it, the “ugly of something, as opposed to its beauty.” Encouraging us to emote with them, Asghar and Choi invited their audiences into the loss, grief, embarrassment, confusion, love, sex, disappointment, discovery, and regret that marked their childhood, their international travels, their families, their college lives, their lived experience. As the title of their workshop, “Sucker-Punching Your Audience,” suggests, both Ashgar and Choi play the game of poetry, masterfully manipulating words to create politically-conscious works, meant to embody the “intersections of art, activism, and politics.”

Moving into darker themes, Ashgar, employing the same defiant and direct voice, proudly claims her own female body in a poem, “Red,” forcing her audience, whether male or female, to talk about and accept her menstruation. Fatimah addresses a seemingly misogynistic lover: “Lover I am not ashamed of the red / drip budding between my thighs. Nor am I amused when you call it war / paint”. Further proclaiming, “Lover, I am not afraid of the colors / my body dreams to produce.” It soon becomes clear, with the words, “I stop you, because you’ll taste metal and think me machine and wires,” that this is not only a poem about menstruation, but about female sexuality. Invoking images of oral sex, Ashgar invites her audience into the world of taboo, one that antagonizes feminine bleeding, the female body and sexual expression. Admitting this was hard to perform the first time — “it is a poem about my body and the guy it is written to is sitting in the audience,” she explains — Asghar continues to perform it for the very vulnerability she experiences when performing it and her audience experiences when hearing it.  What Asghar strives for, as seen in the poem she wrote in letter form to the mother that died giving birth to her and another about growing up in poverty, is to tell something personal and in particular vulnerable. For her, the power of spoken word is to enact change and incite conversation to the exploiting of the “unsaid.” The only way to achieve this is in being the one voice brave enough to tell her (or his) story like it is.

Delving from the bodily to the disembodied, Asghar and Choi shared poems about death, about ghosts, about loss. “on those who kill” was a disturbing portrayal of a wartime journalist Fatimah met in Bosnia who painted homicide and massacre as natural evils. Adopting his voice, the poem opens with this question,  “How many times have you spoken to a murderer?” With other haunting lines like “Living here, we all know murderers,” or “We know people who made massacres as fun as fireworks,” or even “When we spoke of genocide, we spoke of the job of it all. The occupation. The work that needed to be done,” Asghar gives us a chilling look into the mind of a man desensitized to violence and murder. When asked why she wrote it, Asghar insisted that it was necessary to give voice to alternative identities and ways of being. Exploring the “nuance in certain ways of being … the different ways that you could be a person in the world” she wants to show there are “complications of identity and what you are born into and where you grow up.” Blurring the line of villain and victim, Asghar forces us to look at the world “from a completely different perspective,” to critically think about how living in a “fucked up context” could desensitize the human capacity for compassion.

Choi, unlike the narrator of “on those who kill,” seeks to make sense of death and the imprints each life leaves behind in her “Notes on the Existence of Ghosts,” featured in her “Women Only Write Body Poems” collection. She writes, “[w]hen my boyfriend’s mother called to tell me he was dead / I was standing in a CVS, holding a bag of Halloween candy …  Lucky for me, the world is full of ghosts.” In vivid imagery, Choi evokes the ghosts we see everyday, the “gray-green watermarks on the pavement” created by  “leaves stained onto the sidewalk from yesterday’s storm,” “snow angels” that are beautiful “because of the power of an outline to name an absence holy” or the “warm afterbirth” left behind as a train you missed hurdles down its track. She ends, urging us, “if nothing else, remember / the ghosts I leave behind.” Her prose is tactile. Her delivery is so darkened by grief that you cannot help but have a visceral reaction to the images she assembles. By the end of it, you understand her grief and even question, for a second, the existence of ghosts, of things we can’t explain but are very real.

Just when you thought you couldn’t handle any more, Choi thanks her audience for sitting through an hour-long performance of intellectual stimulation overload, and ends with “Pussy Monster,” subtitled “from the lyrics of Lil Wayne’s ‘Pussy Monster,’ arranged in order of frequency.” There is an immediate uproar of laughter in the audience. While in need of comedic relief, it was almost unfathomable that we were about to hear a poem that was a compilation of Lil’ Wayne lyrics. As its title suggests, this poem did not disappoint. The first line follows: “for flu food bowl stood no more soup remove spoon drink juice salt pepper.” As she reads the first few lines of words that were only said once, namely those in his verses, she has a steady, nonchalant tone. However, as words begin to repeat themselves she increases her speed and shifts into a desperate tone. Words like “girl,” “monster,” “my,” “I,” “like,” “me,” “you,” “la la,” appear 10 or 20 times. But the word that stole the show and was said a whopping 40 times was “PUSSY!” Imagine, Franny Choi yelling pussy at the top of her lungs. When asked why she chose to end on this note, Choi chuckled and explained that in her role as a “curator” of sorts of the slam, she  “often moves from a darker place into something that is more empowering.” “Pussy Monster,” while obviously meant to incite and be outlandishly humorous, is very “revealing, exposing and empowering” in Choi’s perspective. “That is important to me … empowerment in the face of pain.”

All in all, Franny Choi and Fatimah Asghar are two talented and passionate women of the word. Their work, written from a female, Asian American, and, as Choi admits, “queer” perspective, is creative and thoughtful. Arguably, the broadness of the themes of the poems they presented was overwhelming, resulting in their performance lacking cohesiveness.

Noel Quiñones ’15, a member of OASIS and one of Swarthmore’s featured poets in the College Unions Poetry Slam Invitational competition, admired their bravery, knowing first hand the vulnerability one can feel performing. Gauging their work not on the basis of individual lines, as the English major in me would, he proposes we consider the affective responses it drew from us. For him, the intimacy of the setting and the effort they put into engaging their audience in that setting made him “snap, sigh…and really think about the process.”

While Joan Huang’ 15 concedes this, she appreciated how aware both poets were of “how they fit into the systems of power,” presenting work she located in “the movements of people who are fighting oppression.” What binds all of the pieces, for her, is the theme of “absence … especially around [exposing] what are the things we don’t talk about.” Both Choi and Asghar used poetry to “not so much break the silence, but as a way to spiral around and express that silence.” In other words, both women were effective in naming that which we do not name, but allowing those who consume their works to make their own impressions, change their own mentalities. As Joan accurately deduced, Choi and Asghar were born to “remix,” to “capture these feign impressions that things make” so as to translate them to non-self-reflexive people. Living the “broke ass life” of a poet, as Ashgar admits, is the only life they can, or want, to live.