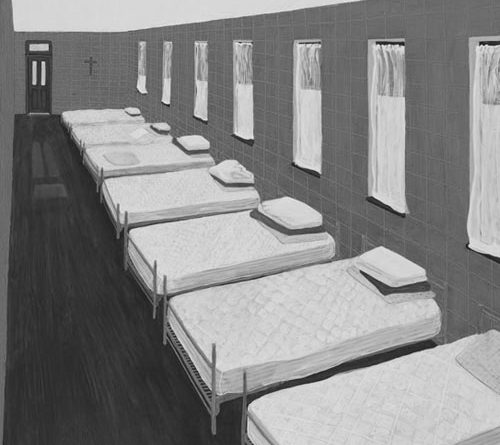 Step into any art museum in the world and you’ll see that male artists have painted just about everything. Certain subject matter appear more frequently than others, such as Christian imagery or female nudes, but nevertheless it is clear that male artists aren’t fixated on any particular theme.

By and large the same cannot be said for female artists, especially contemporary ones. If you completed the same art museums and instead looked only at the work of contemporary female artists, nine times out of ten their work has the feminist political intention behind it. Feminist female artists are by far the most well known outside the art world, and their omnipresence leads to the misconception that contemporary female artists are one-dimensional in their causes and philosophies for their art. As a female art lover who does not wholeheartedly endorse all aspects of feminism, it often becomes disheartening, even irritating to only see women artists who paint nothing but vaginas and categorically castigate all men for their gross sexism.

Visiting the Pennsylvania Academy of Fine Arts (PAFA)’s exhibition titled “The Female Gaze: Women Artists Making Their World,” on view in the Samuel M.V. Hamilton building until April 7th, the title led me to believe I was in for an afternoon of female genitalia and a lambasting of all things masculine. “The Female Gaze” is a term derived from “the male gaze,” a theme that the feminist artist Barbara Kruger dealt with in her combinations of black-and-white photography with red three-color printing typical of low-cost advertisements. I was pleasantly surprised, however, to find not only that there were dozens of contemporary women artists that didn’t solely produce feminist art, but that they also produced really fantastic art. While there were some artworks that were so bad it seemed ridiculous to see them hanging in a museum (Candy Depew’s “Sparkle Bit,” a silkscreen and glitter sticker on paper work, for example, looks like the pattern you would see on a pillow at Limited Too), many were visually rich in substance, both in form and meaning. And this meaning extended far beyond any feminist talking points, of which there were very few on display. For this reason, the title of the exhibit does not do justice to its art, because it sets up the expectation that it will feature a much narrower breadth of art than it actually does.

The key to missing the worst parts of the exhibition is to avoid the gallery that it occupies on the second floor entirely and stick to the first floor, which contains the vast majority of the artworks anyway. I had visited the second floor gallery first because the museum staff told me that there would be an event taking place in the gallery in fifty minutes, but now I know that it really was a waste of time. The second floor gallery merely contains four walls of prints mostly by June Wayne, whose work looks like nothing more than scrapbook cutouts and arguably reinforces the female stereotype of women wasting time on frivolous endeavors such as scrapbooking. The pieces on view here that were not by June Wayne were so unrelated to her work that it made the gallery as a whole disjointed. It gave the impression that the curators had to forfeit continuity and logic in order to pull together an exhibition with only female artists. Overall, it gave me a quite discouraging introduction to “The Female Gaze,” and as I left the gallery I was already thinking about how to go about eloquently excoriating the PAFA for their ill-conceived exhibition.

But all these first impressions immediately left me once I arrived at the first floor galleries. These contrast in every single way with the second floor gallery, the only exception of course being that they only featured female artists’ works. The first floor galleries contain a teeming diversity of artworks in all sorts of mediums with original themes that I’ve never come across before in art museums. Before viewers enter into the galleries with themes, however, in the large foyer outside the galleries are works on view by several of the artists who have more work on view in the galleries. They serve as a kind of tantalizing introduction to what viewers can expect to see inside. Several pieces in this foyer made me realize that my first impressions of the “The Female Gaze” were mistaken. One such piece was Judith Schaechter’s 1992 small stained glass window titled “A Breeze Blows Leaves In.” The accompanying caption includes a quote from Schaechter that she tries “to make works that mean different things to different people so I edit them for neutrality. I am trying to go for something many people can relate to,” a very interesting goal since it flies in the fact of what we learn in art history class, which is not to project your own feelings onto an artwork and therefore mistakenly assign meaning to it that the artist may not have intended.

Once I entered into the main galleries of the exhibition, I encountered the first theme, which was the self-portrait and the myriad, sometimes unconventional, ways that women artists have depicted themselves. One particularly unusual yet beautiful self-portrait was the tiny 8 x 10” oil on masonite 1945 work “Girl Searching” by Gertrude Abercrombie. With refined brushwork in a style reminiscent of Henri Rousseau set in an ominously barren, dark landscape similar to Salvador Dali’s deserts, it seems like an odd way to depict yourself—especially since the face of the girl figure in the painting consists of just two black dots for eyes and a dash of black for a mouth. Yet with this abandonment of the traditional way of composing a self-portrait, which assumes that the face is what a self-portrait should be about, we as viewers feel that the arrangement and relationship of the objects in the small painting actually provide a window into the soul of the artist. It feels as if we know her better with this sort of self-portrait than we would if she had only painted a realistic rendering of her face.

The next gallery tackled the idea of selfhood in the context of community, examining the ways in which artists define their sense of self in the different communities they take part in throughout their lives. Several stunning works appeared in this gallery, including Hung Liu’s 2004 oil on canvas “Visage II.” The image has an antique flair to it due to the dripping paint that runs from the top of the canvas, as if time has warped its surface. The large, visible brushstrokes that the artist used to compose the face of a lovely young Chinese girl give the sense that she is piecing together her memories of China like a puzzle one stroke at a time.

A particularly enigmatic work on view in this gallery is Lien Truong’s 2005 oil on wood panel “Family Sitting #2.” It’s really a quite conventional family portrait showing two parents and a child sitting on a couch in their living room—that is, except for the fact that the bodies have been completely removed from the clothes. It’s as if the family used the invisibility spray that Spongebob Squarepants and Patrick Star bought from a magic shop in one particular episode and then put their clothes back on to pose for a family portrait. This mix of the utterly conventional with the uniquely absurd transforms it into a delight for the eyes tinged with an almost humorous tone.

Despite its bad beginning, this exhibition pleasantly surprised me as it turned into the kind of show where I have to stop myself from shouting “WOW” at every single work. Given that it was presented in an arts academy that doesn’t have a budget as large as a major art museum like the PMA or the MoMA, I had low expectations. But I definitely underestimated the PAFA, and I am so glad the exhibit is open until April, for I plan to go back several times to celebrate the female gaze.