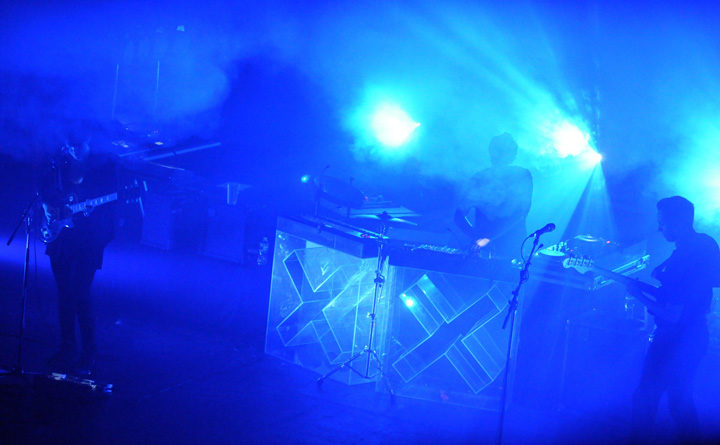 Early in The xx’s Sunday set at Philadelphia’s Electric Factory, Romy Madley Croft, the band’s guitarist and female vocalist paused between songs to say, “We finally made it.” She was referring to the cancelation of the band’s last Philadelphia performance during October’s Hurricane Sandy, but as the show continued, it was impossible not to see that the band had “made it” in another sense entirely.

Despite the fact that The xx produce the kind of music that works best in intimate settings, it was clear that they belonged on a much bigger stage. Throughout the night, the band’s expansive multi-rig light design felt cramped on the Electric Factory’s small stage. The sold-out crowd sang along with each chorus, cooed their favorite lyrics, and a man shouted “Again!” after the group played a tense, cathartic rendition of the debut album cut, “Intro.” In 2010 the group won the Mercury Music Prize, essentially the UK’s Grammy Award for best album, and have since been booking stadiums across their home country. At this point, it’s only a matter of time before they start doing the same in the US.

Music critics first appraised The xx’s 2009 debut album as a muted collection of love songs that amounted to a testament to the continued relevance of indie rock, but the band’s appeal proved much wider-reaching. Their self-titled debut record was eventually embraced by a larger sphere fans who received their musical education not on the pages of Pitchfork, but via FM frequencies. Despite the band’s all-black dress, an aesthetic that might even serve to code their artistic aspirations as goth-rock, it became clear that The xx weren’t indie producers of outsider art, but purveyors of preciously crafted pop songs.

And since The xx released that first album of stripped-down, nocturnal pop songs in 2009, popular music’s sonic landscape has tilted in their favor. The band’s first release presented the group as a unique musical voice that sulked in skeletal arrangements, articulating a musical grammar where less was made to stand for more. Even on their debut’s most multi-faceted orchestrations, the emotional heavy-lifting is relegated to spare sections of pillow talk vocals cooed over the reverberating sonics of synthesizers and guitar chords.

It wasn’t long before this aesthetic broke through to the mainstream as Drake’s gloomy love songs and the midnight missives of R&B act The Weeknd adopted this sonic palette for radio waves, bringing it to the masses.  rake has publicly professed his love for The xx’s percussionist, Jamie xx, and Jamie produced Drake’s massively successful Rihanna duet, “Take Care,” as well as tracks for Rihanna and Alicia Keys.

Yet the focus of The xx’s Electric Factory performance was their 2012 album, Coexist. Sure, the band played the obligatory tracks from their debut – “VCR,” “Islands,” “Heart Skipped a Beat” – but the focus was on their new material and it’s new musical direction.

The three-piece often say that Coexist was inspired by dance music and while the result may be disappointing to someone expecting an LP’s worth of 4/4 beats, Coexist is a predictable infusion of the current UK dance scene onto The xx’s usual song structure. Performed live, these songs didn’t ignite the dance floor, but, like the rest of the band’s songs, gave way to the nodding of heads and the plucking of heart strings. Those who heard this material for the first time Sunday night may have been expecting more of a departure, but weren’t necessarily disappointed. “It sounded like a lot of their other stuff, but I liked it,” said Mireille Guy, ’15. The xx aren’t an act seeking to redefine their raison d’être, but that’s the point. Their new songs don’t employ heavier rhythms in order to create danceable reworks of their old aesthetic, but add a rhythmic backbone that instead works as an unobtrusive addition to the band’s signature sound.

When playing these songs live, Jamie xx donned a pair of headphones and played the beats though a pair of digital turntables, mixing songs into sets by riding their propulsive rhythms from one song into the next. This impromptu DJing was most effective when Coexist’s bass-heavier tracks “Reunion” and “Sunset” were linked via Jamie’s solo dance track “Far Nearer, allowing the energy built during one song to continue to the next.

When played out, some of their older songs received a new rhythmic treatment. Sparse and pleading “Shelter” was reimagined as a lyrical DJ tool before it melted away into piles of hushed vocals and strummed guitar strings.

Despite a lackluster encore, The xx delivered a concert that incited multiple make-out sessions, stole a few tears, and even compelled a few to dance. But then again, the band didn’t have to. When they walked out on stage to play their first song, the audience erupted with an energy reserved for first-rate rock stars and teen heartthrobs. They didn’t have to prove anything. They’d already arrived.