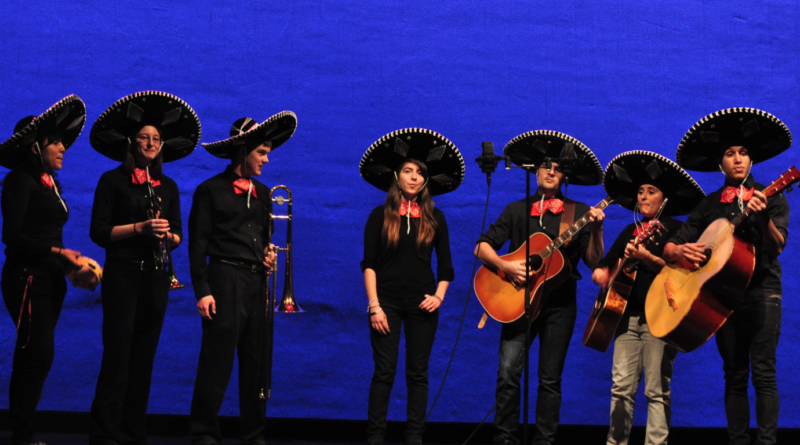 From Grapevine to Rythm ’n Motion, an array of student clubs came together to fight malaria and entertain the student body in the fifth annual Global Health Variety Show. The show, held by the Global Health Forum (GHF) on Saturday, Jan. 26, 2013 in the Lang Performing Arts Center, was dedicated to Ravi Thackurdeen ’14, who passed away while studying abroad in Costa Rica last spring. An active member of GHF with a keen interest in issues of global health, Thackurdeen had been working for the Organization of Tropical Studies, studying respiratory illness among the Ngobe people.

Entrance to the event was free, though audience members were encouraged to contribute an optional donation of $5. Through these donations, GHF raised about $300 for Against Malaria, an organization dedicated to preventing the spread of malaria. Operating in 143 different sites across the world, Against Malaria provides mosquito bed nets to populations at high risk for the disease. The $5 donation buys one bed net for a family.

The show began with an introduction of the night’s masters of ceremony, Christopher Capron ’15 and Randy Burson ’15. They were followed by performances by the Swarthmore mariachi band, Los Parangaricutirimicuaros, a capella groups Grapevine and Chaverim, Boy Meets Tractor, the student sketch comedy group, and members of the Swarthmore Tango Club. Capron and Burson emerged in between performances to introduce the next performers and exchange pre-scripted banter, which was met with appreciative laughter.

“We’re roommates,” said Burson on the dynamic he had with Capron. “It helps.”

A short intermission preceded a more somber second half, starting with emotionally charged spoken word performances from members of OASIS. Afterwards, Burson and Capron held a moment of silence for Thackurdeen, which was respectfully observed by all those in the theater.

Turning towards more light-hearted fare, a capella groups Mixed Company and Essence of Soul both offered renditions of popular songs, while comedy group Vertigo-go entertained the audience with improvised skits.

The night’s proceedings ended with performances by members of Rhythm n Motion and a reminder from the MCs about the cause for which the event was held.

A student-led organization, the Global Health Forum (GHF) focuses primarily on issues of public health and global health and has held the variety show every year since 2008. The group meets every Sunday at 9 p.m. in Trotter 215 to discuss ways to raise awareness for various causes, from malaria prevention and foreign medical aid to nations suffering from extreme poverty.

GHF sorely misses the presence of Thackurdeen, who was to become part of the group’s leadership this academic year, and hoped to honor him through the variety show. The event organizer, Nina Kogekar ’13, said, “Since we heard the news last spring, we were all thinking that at some point this year, we’d like to do something in his memory, because he did make a lot of contributions towards our group.”

“I think that it’s a popular event because it brings together so many different performing groups — like maybe fans of dance groups don’t get to see a capella or comedy.” Kogekar added. “We’ve kept doing it because it’s been pretty successful and it seems like the student body enjoys it.”

Gabe Benjamin ’15 agreed that the range of performances offered at the variety show contributed to its appeal. “I really enjoyed the event because I thought it was a really awesome way to see all different types of groups on campus and get a little taste of every group.” Benjamin, who had a friend from home visiting that day, appreciated the opportunity to show off the diversity of talent among Swarthmore students.

Another audience member, Kathleen Escoto ’16, attended the show with friends and said afterwards, “I thought it was an interesting mix of events that really exhibited all the cool things that are offered at Swarthmore. I thought it was nice that at the same time they were raising money and commemorating Ravi. Although I’ve seen a lot of these things already, I think the cause was great.”

Cole Harbeck ’15, a member of Essence of Soul, said the group enjoyed participating. “I think it was for a good cause, a lot of good groups came out and performed — it was fun,” he said.
“We’ve been a part of the show for the past couple years and they asked us if we’d like to participate again, so we agreed to give our time,” Harbeck added.

The variety show will not be the last event held in Thackurdeen’s memory. GHF has tentative plans to have another fundraising event, this time with proceeds going to the Organization for Tropical Studies, the group that Thackurdeen worked with in Costa Rica.

Capron said, “We’re hoping we can honor Ravi further by supporting the organization that he was working with last spring. We weren’t able to do that this time but we’re optimistic of doing it in the future.”