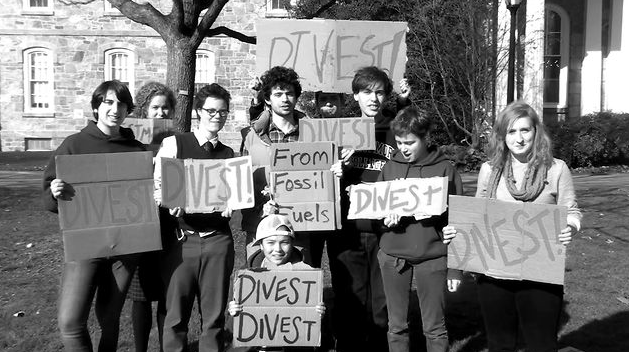 When The New York Times published an article on Dec. 4, 2012 about Swarthmore College students’ effort to make the college divest from fossil fuel companies, the entire campus learned about student group Mountain Justice’s goal to fight against pollution and climate change. What they did not know, however, is that the focus of the story has been a constant subject of discussion between Mountain Justice members and the Board of Managers for close to two years. Divestment would entail cutting back the endowment, specifically its holdings in fossil fuel companies. Swarthmore is among several schools with students who are trying to accomplish this.

“The campaign nationally took off last semester, especially after the New York Times article,” Mountain Justice member Dinah Dewald ’13 said. “So after that happened, we have sort of shifted our focus from being just focused on Swarthmore to thinking we’re part of a national movement.”

Dewald, along with fellow Mountain Justice member Marco Covarrubias ’15, feels that despite their persistent efforts and increased dialogue with the administration, Mountain Justice members are coming up short. As conversation with other schools across the country has increased since the article, Dewald and Covarrubias have discovered that Swarthmore’s administration is not unique and describe most other administrations as dismissive and reluctant to make similar changes.

“We’re focusing on Swarthmore’s endowment and think that Swarthmore has the potential [to lead the movement],” Dewald said. “People are looking to Swarthmore to be a leader.”

According to Vice President for Finance and Treasurer Suzanne Welsh, the administration is proud of Swarthmore students’ leadership on the issue of climate change and their desire to raise public awareness.

“The Board fully supports the urgency of working on climate change, and within the College we’re making additions to the academic program [with environmental studies],” she said. “We’re doing a lot on campus to reduce our carbon footprint, and we’re pursuing shareholder activism.”

Still, the possible demands of this sustainability movement prevent the College from divesting. One potential issue, Welsh explained, is the reaction of alumni who have contributed substantially to the endowment. Many of them feel the endowment should be allocated according to economic necessity than than social initiatives, especially if they do not agree with them.

Dewald disagrees, however, noting that many alumni, as well as Swarthmore professors, have reached out to express their agreement with Mountain Justice’s goals. She added that she believes that an environmental article in the most recent Alumni Bulletin is a direct response to Mountain Justice’s actions.

Some potential logistical drawbacks, Welsh said, would be altering which firms the College would invest in, determining who would manage and construct the list of permissible firms, and keeping track of how that list changed over time. Divestment could also cause a significant financial impact, which would lead to an entire restructuring of the endowment. Swarthmore has only divested once, in 1986, because of apartheid in South Africa.

“General policy is that we, for a lot of reasons, think that the endowment should not be used as a tool for social purposes, except for extreme exceptions,” Welsh said.

“We’re aware that people have been running campaigns for years and haven’t gotten the government to do anything about these methods that are really harming the community,” Covarrubias said. “We feel that we have a lot of power, given that we go to a school with a huge endowment, and we want to use that power to make a difference.”

Covarrubias and Dewald both expressed frustration with the lack of progress that has been made in the past couple years of discussion with Swarthmore’s Board of Social Responsibility.

“We understand that this is a politically charged issue, but it’s definitely a pattern that the administration will disguise a political motive in a logistical question, like the financial aid question,” Covarrubias said. “We want people to know we’re going to take action nonetheless.”

The question of financial aid involves a rumor that if divestment had a negative impact to returns, financial aid would be cut. Dewald and Covarrubias both think this rumor was inaccurate.

“When we divested from South Africa [over the span of six or seven years], we actually tallied the cost,” Welsh said. “That decision cost the college 2.2 million dollars … [The financial aid question] is a rumor, but if there were a cost, it would have to come out of something. We spend all the money that’s available to us, and if you constrict that money, you have to figure out where that financial cost is borne.”

Mountain Justice has continued to pursue the issue, regardless of the administration’s response. At the end of last semester, the group held a demonstration involving pushing dominoes down the stairs of Parrish Hall to show the domino effect of the climate change and investing in fossil fuels. They were surprised by the large turnout of the event.

In collaboration with 210 schools across the country, Mountain Justice has also planned a convergence for next month. The group expects 150–170 students who are fighting for divestment at their respective colleges to show up. The convergence will concern how to run a campaign strategically, how to connect to the national movement, and how to ensure support of frontline communities. The convergence will take place on Swarthmore’s campus from Feb. 22–24.