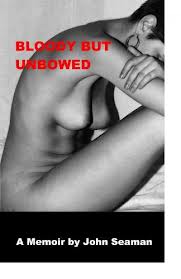 John Seaman’s life, as described in his recently self-published memoir, “Bloody But Unbowed,” is as eccentric as the man it captures in its pages, and equally defies attempted categorization. A self-proclaimed atheist, Naturist, nude photographer, recovering schizophrenic and Swarthmore graduate, Seaman and his memoir expose a psyche riddled with the could-be contents of an impossible work of fiction. There’s hallucinatory electronic explosions; there’s reflections on religion, Communism, and Freudian psychoanalysis; there’s depictions of life on the streets and evenings in flophouses.

And there’s sex. Lots and lots of sex.

Despite fear of distorting the scale of the book, the word “epic” nonetheless seems to slip between the litany of strange twists and turns and the understated narrative style. The memoir portrays a journey — from Seaman’s hospitalization after being discovered slitting his wrists on Fifth Avenue to his success as a nude photographer — wrought with unlikely obstacles on his path to sanity and fulfillment. Organized in chapters dedicated to stages in his life, Seaman explicitly highlights the “beats” that comprise brushes with adversity and the moments in which he overcomes. His loose, informal prose maps the specific locations of his travel and day-to-day living and caricature his many acquaintances while simultaneously offering deeper philosophical musings — in some ways reminiscent of a Kerouac-ian description of an individual’s movement through the world.

The memoir, which took fourteen years to write, is described in its pages as an attempt to offload “a lot of sexual and spiritual baggage;” however, Seaman confirmed in a phone interview a greater purpose implicit in its publication.

“After I recovered, I wanted to show how people could make something of themselves,” he said of publishing his story.

The memoir is both unbowed (as per its title) and unapologetic. Seaman’s often-contentious views — some of which seem to be products of a gaping generational divide — are asserted with breathtaking self-assuredness. He posits that every woman should be as well-learned in the bedroom as the prostitutes working in the brothel he frequented for fourteen years; he asserts that love is a hindrance to productivity; and he quashes artists as “flaky” and second-rate next to men of science and mathematics. In describing a past lover, he writes, “She was, unfortunately, very flat chested (like Twiggy, incidentally). [Her] nipples were different sizes. One looked like a fried egg.”

After the raised eyebrows have fallen, one begins to register these moments as critical to understanding Seaman himself: an author with staunch views on the human condition, rooted in his own idiosyncratic experiences.

The breadth of Seaman’s endeavors alone are indicative of the sheer volume of snapshots he draws from in his memoir. He served as a writer for the American Institute of Physics and worked as the Chief Science Editor at Columbia University Press writing articles for encyclopedias; he was hired as proofreader for large legal firms in the city; he worked in a chain of Marlboro book shops scattered throughout the streets of New York. The memoir’s form is representative of the diversity of experiences: it’s a tapestry of narrative, letters, articles, and a Rorschach diagnostic test.

Through the various stages of Seaman’s memoir, sex receives no peripheral role. From the opening pages describing a brothel in New York that Seaman frequented for fourteen years to his descriptions of self-conscious encounters while at Swarthmore, the role of “clinical sex” — an act of balance and stability rather than emotional expression — is trumpeted as a saving grace in the years after Seaman’s hospitalization. Unable to cope with the social nature of a relationship, Seaman’s frequent visits to “Patricia’s brothel” provide an outlet for meeting essential physical needs.
“The only decent thing in all my later life was the brothel,” he writes.

As a thread that runs through the different segments of the book, Seaman’s treatment of sex also seems to connect his memoir to life on campus today. In how many minds has the Saturday night hook-up become an act satisfying a need for a physical outlet, and not an emotional channel? Seaman often lapses into reflections of “lost opportunities” for sexual fulfillment, particularly in relation to his early life. While campus culture might leave some disillusioned, it no doubt offers opportunities for stability which Seaman did not have access to in the heavily supervised years of the early 50s at the college.

Ultimately, the voice breaking through the pages of “Bloody But Unbowed” doesn’t register as being as far removed from the present as the years dividing us with the author’s experience may initially suggest. Seaman’s memoir is inarguably a product of his time, but in its candidness, it also registers as a project of human scale. In his celebration of our bodies — through his art and his fixation on sex — he celebrates us with all of our flaws and strangely-shaped nipples, and in his recounting of his struggles, he celebrates out ability to persevere.