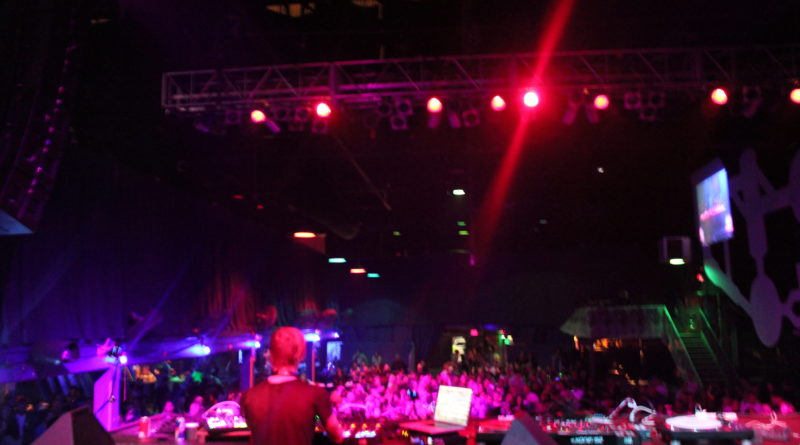 When Richie Hawtin stepped up to the decks at 1 a.m., the ebullient crowd at Philadelphia’s Electric Factory concert hall did not restrain itself. The Berlin-based techno DJ is one of the most celebrated figures in the history of electronic music, but he wasn’t there to promote himself. Throughout the day leading up to his Philadelphia performance, Hawtin maintained his light manner, preceding most sentences with a delicate brush of his bangs and his easy grin, but he knows there’s a lot of pressure of him these days and that untold eyes around the world are watching his every move.

Between his DJ sets, his revered techno label Minus, and his innovative live shows under his alias, Plastikman, Hawtin’s every move has been chronicled intensely for over a decade now, but he’s recently put himself under a more intense gaze than ever by launching CNTRL, a month-long series of daytime lectures and late-night concerts in college cities across the U.S. and Canada. This Friday brought Hawtin and his CNTRL crew to Philadelphia for a 5 p.m. panel at Drexel University’s main auditorium followed by a 9 p.m. to 2 a.m. concert at the Electric Factory.

The tour was created in order to reach America’s puerile EDM generation — a set that looks to electronic music only for neon-colored synth anthems and dubstep’s barrages of distorted sub-bass frequencies — and expand the culture’s narrow definition of electronic music.

“We’re not here to try and get people into a certain kind of music,” Hawtin said during Friday’s panel discussion at Drexel, “but to show how wide and varied the electronic music field is. For many of us, we’ve waited for this moment in North America to accept what we do, but now we are concerned by the direction that the music is taking.”

Richie Hawtin is no stranger to North America. He was raised in Ontario, right across the border from Detroit, the birthplace of techno, before moving to Berlin less than a decade ago. Hawtin made frequent trips into Detroit, where he discovered electronic music and began going to underground concerts. Years later, he established himself in the nineties as an unequaled producer of minimal techno and became a prominent part of the vibrant Detroit scene. As a producer, his musical project has always seemed to be an experiment that asks how many elements can be removed while still producing a track that moves people both emotionally and on the dance floor. The result is a bare bones form of techno that’s not as muscular or industrial as the kind being exported en masse from Berlin today, but one that feels more cerebral.  In the 90s, Hawitn’s innovative tracks gained him a large international following and his career has grown from there.

These days, Hawtin is a legend in electronic music circles.  For the past four years, he’s fallen within the top three spots of Resident Advisor’s Top 100 DJs list, coming in at number one in 2009. This year MixMag named him the number six dance artist of all time and last year the publication crowned Hawtin the number two DJ of all time, coming in second to mainstream favorite Tiësto.

It’d be easy for Hawtin to rest on his laurels and tour the world until his retirement, but instead he’s still pushing. The challenge now is to bring underground music culture to mainstream America. As with everything he does, he’s putting all his energy into his CNTRL tour.

“We want to represent our culture and show what we are doing,” Hawtin said at that day’s lecture. “The best way to do that is just to show what we do.”

Friday night, Hawtin and the tour’s other core DJs, Loco Dice and Ean Golden, each took their turn at the decks, spinning for an hour each. They were joined by Philadelphia native Josh Wink, who earned worldwide attention as a rave DJ in the nineties, and local DJ Rob Paine.

Each set was only an hour — a short time for a house or techno DJ to spin — but this allowed each of the artists to show the audience what they do and move on. By the time Hawtin stepped to the decks at 1 a.m. and dropped Gitech’s “What Is House What Is Techno,” the audience should have had a pretty good idea how to answer the question.

But then again, most in the audience seemed pretty familiar with the genres’ underground incarnations.

“I’ve seen Hawtin three times before,” a 20-year-old student told me when I asked if he was familiar with the DJ. He’s amazing.”

Most others told me they were already familiar with Hawtin and were fans of his music. However, there were many who admitted that friends who knew the music had brought them along.

“I usually don’t listen to this kind of thing,” said a Temple University student in a short black dress and dangling gold earrings, “but this is pretty good.”

The set wasn’t one of Hawtin’s best, but certainly showcased his minimal style of simple synthesized arpeggios and booming bass accompanied by the snare rolls that punctuate his DJ sets.

“I haven’t listened to a lot of stuff like that before,” an EDM fan wearing neon sunglasses told me, “but that was awesome.”

At the end of the night, Hawtin stepped back from the decks and walked into the audience. He shook hands and signed merchandise. At this point, you’d expect him to leave, but he’s still at it. He’s talking to fans, asking them questions.

“I don’t think this tour is about converting people,” Hawtin said at that afternoon’s panel discussion, “but just bridging the divide between our cultures, one person at a time.”