Campus Journal » Columns » Beautiful and Bizarre as Life: Dancing around the Bride Debuts at the PMA 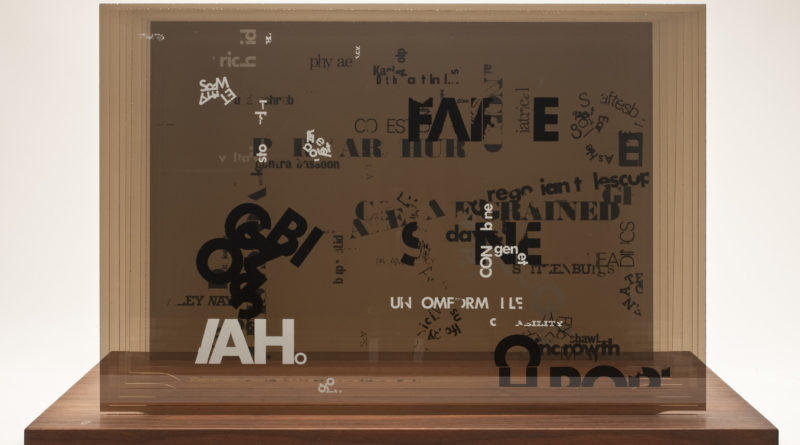 Contemporary art can often seem cryptic and inaccessible to viewers. Devoid of recognizable figures, it leaves us with random dabs of paint, slashes of lines and absurd juxtapositions, making it appear impossible to even understand how the work speaks to us. And yet, paradoxically, some art actually embraces life and experiences common to all humanity, no matter where or when they live. Dancing Around the Bride: Cage, Cunningham, Johns, Rauschenberg, and Duchamp, the Philadelphia Museum of Art’s latest exhibition which runs until January 21, displays the works of contemporary artists who accomplish this crossover of art to the realm of life. In contrast to the work of Pop artists like Andy Warhol and Ai Weiwei, which connects art to the products of modern American culture, John Cage, Bruce Cunningham, Jasper Johns, Robert Rauschenberg and Marcel Duchamp use their art in an intermediary role, to call attention to the beauty of life’s fundamental properties that transcend any cultural context.In every aspect, the exhibition strives to mirror the mechanisms of living. Just as our lives don’t neatly fall into a linear logic of organization, where events and thoughts and feelings fall neatly in steps with marked causality, Dancing around the Bride doesn’t either. Instead, the exhibit centers on four themes, titled The Bride, Chance, The Main Stage, and Chess. Each theme has a unique character and reveals different facets about the relationship between Duchamp and Cage, Cunningham, Johns and Rauschenberg, who were all a couple generations younger than Duchamp.The first theme, The Bride, begins in an acoustic sound chamber designed by Philippe Parreno, a living artist who collaborated with the curators in the exhibit’s visual and spatial organization. Mounted on a plexiglass wall in the middle of the hallway about 20 feet in front of us floats Duchamp’s 1912 oil painting Bride, who would enjoy the role as enigmatic protagonist in Duchamp’s monumental work of the 20th century, The Bride Stripped Bare by Her Bachelors, Even (The Large Glass). In this smaller canvas, visually similar to Duchamp’s notorious 1912 Nude Descending a Staircase (No. 2), we see virtually nothing that could indicate the subject is a bride — but such is expected with non-objective abstract art, anyway. Despite this lack of visual representation, however, Duchamp does manage to convey aspects of the woman’s form in a way that connects both to the work’s title and the nature of life in general. Primarily comprised of smooth earth tones, Duchamp weaves delicate arabesques with sensuous shading reminiscent of human skin throughout the composition, evoking an elegant bride potent with untouchable allure and burgeoning sexuality. Around her rebound the works of Jasper Johns and Robert Rauschenberg that she inspired. Although clearly stemming from Duchamp’s Bride, these pieces offer new considerations to ponder about the bride as a concept. Rauschenberg’s 1959 “combine” painting, Bride’s Folly, presents a cascading stream of white paint through the center of the canvas, surrounded by bold, unmixed hues with an actual fork stuck in the middle of the veil of white. “Combines” such as Bride’s Folly, a type of artistic “medium” Rauschenberg invented which combines painting with found objects, allows the artist to bring the real world directly into the realm of painting, a realm that can often feel disconnected from life. Whether Rauschenberg uses this combine to poke fun at the elevated status of the bride or to acknowledge the ironic anxiety that surrounds the happy occasion of a wedding is left open for viewers to decide.

The next theme, Chance, becomes surprisingly touching in its charming celebration of the mundane laws that govern the universe, including gravity, randomness and time. Duchamp’s 1920 gelatin silver print Élevage de poussière (Dust Breeding) at first glance appears to be a photograph of an ocean-soaked sand beach. It looks quite intriguing. But in fact the image we’re looking at is six months’ worth of dust that Duchamp has deliberately left to accumulate on the glass of The Large Glass as he has been working on it. Only an artist like Duchamp, who embodied in his work John Cage’s statement that art should be “an affirmation of life — not an attempt to bring order out of chaos nor to suggest improvements in creation, but simply a way of waking up to the very life we’re living, which is so excellent once one gets one’s mind and one’s desires out of the way and lets it act of its own accord–” could have thought to call dust accumulation a work of art. People often sneer at contemporary art for its lack of the traditional “technical mastery” that we associate with classical artworks and retort “my kid could have made that.” But in fact that kid most definitely could not have made it, because Duchamp possessed a rare awareness of the brimming potential in the minutiae of life, and he was the first to unleash it with such direct, uncompromising force.

The third theme, The Main Stage, contains the largest gallery and is the most complicated theme of the four. In the center of the gallery is a dance platform, where throughout the run of the show viewers will have the opportunity to watch dancers from Merce Cunningham’s original dance studio perform Johns and Cunningham’s choreographed homage to Duchamp Walkaround Time from 1968. At various points throughout the day, different sound recordings of Cunningham and Cage play, setting off sudden random spasms of sound as viewers peruse the gallery. On the periphery of the dance floor hang combines and paintings by Robert Rauschenberg and Jasper Johns which complement the theme of life’s primacy in art that breathes through the entire show. Johns’ 1964 oil on canvas with objects titled According to What, for example, calls attention to the absorbing beauty of pure pigment on linen canvas. Johns gives us a shock of unadulterated red, a jolting block of blue and a jaunty punch of yellow, completely breaking the artistic canon of creating illusion. Although his work may seem simply conceived due to its spontaneity, it gives us pause as we return back to the fundamentals of art, and therefore the fundamentals of life.

Chess provides a sweet, endearing end to Dancing around the Bride. Cage and Duchamp were avid chess partners: after Cage finally got the courage in the early 1960s to ask the already-lauded Duchamp for chess lessons, Duchamp agreed, and the pair saw each other every week until Duchamp’s death in 1968. The gallery thus serves both as a testament to Duchamp’s friendships with Cage as well as Johns and Rauschenberg and as a metaphor for the artistic exchanges that occurred between these giants of American postwar art. Particularly moving is Cage’s 1969 plexigrams series called Not Wanting to Say Anything about Marcel, a title based off Johns’ response to a reporter who inquired about his feelings upon the death of his friend and inspiration.

It is clear through this and all of the other rooms in the exhibition that Cage, Johns and Rauschenberg deeply admired and were fond of Duchamp, forging an artistic brotherhood perhaps stronger than that of the Impressionists or Pablo Picasso and Georges Braque. As legacies of Duchamp in the American postwar art scene, Cage, Johns and Rauschenberg committed themselves to continuing their bold forefather’s crusade for the appreciation of life’s randomness, for all that is absurd and stupid. They took the commonplace laws which we never notice that govern our daily lives, and made them art: they took notice.