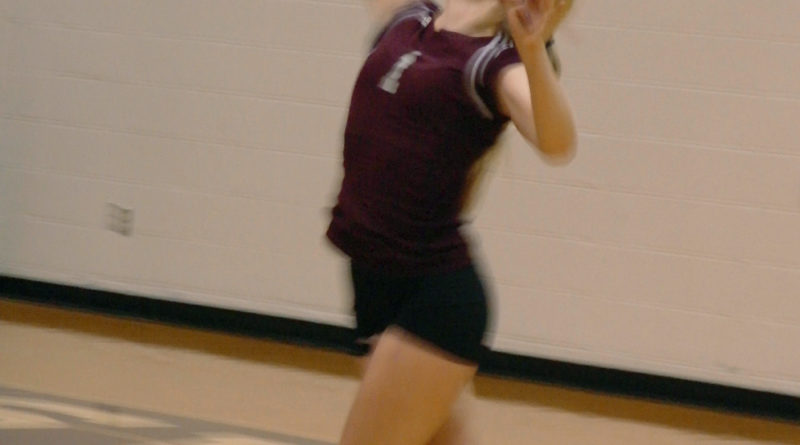 While the majority of Swatties may have been relaxing over fall break, the Swarthmore women’s volleyball team kept themselves busy, racking up wins, hitting milestones and bringing themselves closer to the conference playoffs.

In the short span of a week, they pulled away with wins against McDaniel and Muhlenberg, along with wins against Smith and Colby in the Hall of Fame Tournament hosted by Mount Holyoke. In addition, the two senior captains wrote their names in Swarthmore volleyball history; Allison Coleman ’13, setter, recorded her 3,000th career assist in the McDaniel game, while Kat Montemurro ’13, outside hitter, clocked in her 1,000th career kill in the following game against Muhlenberg.

While a seemingly staggering number, 3,000 doesn’t mean much to Coleman. “Three thousand is just a number. To me, it’s about feeling like you contributed to the team, and feeling like the team is successful,” she said. However, to her teammates and her coach, her accomplishment is no surprise. “Allie’s a competitor. Allie wants to win,” head coach Harleigh Chwastyk said. “Between the last couple classes that have graduated, [she’s] one of the players up there who’s really put in the time and the energy outside of team practice to better herself.”

Chwastyk isn’t the only one who has noticed Coleman’s work ethic; amongst her teammates, she is known for her commitment and dedication to the sport. Brone Lobichusky ’14, middle blocker, said, “[Allie’s] always the first one at practice, the last one to leave.”

Despite being only the second player in Swarthmore volleyball history to reach the 3,000 mark, Coleman, perhaps unsurprisingly, still isn’t 100 percent satisfied.”  I’m going to get the numbers because the passing’s good and because the hitters are good, but that doesn’t really mean I can ever stop working on my setting,” she said. “You can never ever be complacent, no matter what your role is on the team.”

Just one game later, Montemurro joined her four-year teammate and fellow senior captain in the record books, becoming only the fourth player in program history to hit 1,000. Like Coleman, Montemurro shrugged off the number, saying, “I wasn’t really paying attention to it.”

However, considering her undeniable value to the team, it’s only expected that Montemurro would accomplish a feat of such magnitude. “Kat’s definitely someone you can rely on in any situation, in any kind of game,” Lobichusky said. “[She’s] always the motivator on the team … she kind of has a knack of knowing what to say to get you out of your head.”

It’s only fitting that Coleman and Montemurro reached their milestones only one game apart. “They have really good chemistry on the court … they really know how to rely on each other,” Chwastyk said.

As the last two remaining seniors, they’ve had four years to work together — even when Montemurro played as a middle blocker — and their efforts have clearly paid off. “[Kat’s] a really versatile player, and we play well together,” Coleman said. “We find each other on the court, and we’re probably the two loudest people on the court — have been for a while.”

Montemurro summed up their similarities in one simple sentence: “On the court, we both want to win.”

Coming off two monumental games, the team entered the Hall of Fame tournament and put up an impressive performance, winning on the first day of the tournament in straight sets against Smith, and splitting the second day with a loss to Tufts and another straight set victory against Colby. “We had some great hustle plays,” Lobichusky recalled.

According to Chwastyk, the tournament was a sneak preview for what conference playoffs could look like for the Garnet. “What we need to work on this week, to finish our season, is the element of finishing sets and matches, and not making our own errors,” she said.

With only two regular season games left before conference playoffs begin, everyone is highly anticipating two tough match-ups ahead. “Both from Bryn Mawr and Haverford, I’m expecting really good defense,” Chwastyk said. Reluctant to get caught up with the too-distant future and determined to focus on the immediate present, Chwastyk plans on approaching the short remainder of the season “one match at a time.”

Montemurro has one goal for the team: “We want to win out our season.” Sharing Montemurro’s wish, Coleman is looking forward in particular to the Haverford game. “When we play them this year, there’s going to be a lot of fire on our end for sure,” she said, hinting at the tough loss the team faced last season when Haverford ousted them in the first round of conference playoffs.

Lobichusky is focusing on the even more immediate present. “I need to make it out of practice first … I try to take it one day at a time.”