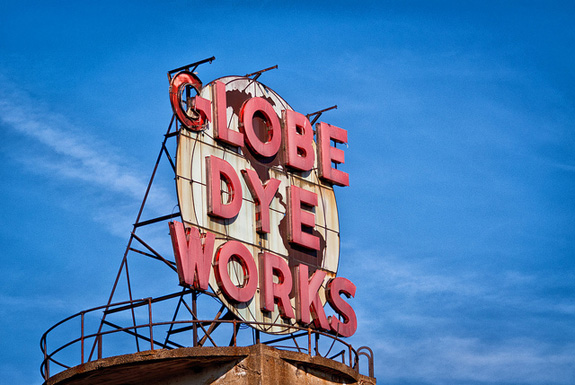 This past Saturday morning brought with it the stifling realization of yet another weekend at Swarthmore. That isn’t to say that I generally consider weekends at Swat a bad thing, but after five or six spent and forgotten, I was ready for a change. But what should I do?

I extended my feelers, hoping to make contact with a friend with plans already in progress that I could simply plug myself into. This project is a familiar one, and thus I have preferred avenues to go through. My first choice proved successful: a couple of my friends were heading into Philly to check out “this abandoned warehouse-cum-art-gallery-or-studio-space.” Given the exceedingly vague and intriguing description, not to mention the off-campus allure of Philadelphia, I politely asked if I could tag along. They yielded, and we set forth.

Globe Dye Works is a formerly abandoned dye factory in the Frankford neighborhood of Northeast Philly, just minutes away from my birthplace of Port Richmond. The building itself is primarily red brick and, though considerably scratched and marred by its one-hundred-fifty-year existence, stands stout among the rowhomes that surround it. Upon entering, the rustic aesthetic overwhelms: the unfinished walls and ubiquitous iron oxide remind you of the utilitarian designs that have since faded into chic obscurity.

Throughout the open floor plan, various sculptures occupy various repurposed spaces. There is a group of vinyl busts arranged in a semicircle meant to evoke prisoners at Guantánamo Bay next to a giant vat that would have contained dye a hundred years ago and a polyhedric speaker installation in an out-of-the-way storeroom. In many of the spaces, the building’s aesthetic merges with that of the sculpture, giving the impression that the sculpture has been there as long as the building. For the most part, however, the installations look and are ostensibly meant to look out of place in their newness amid the general state of decay and obsolescence.

One piece stands out rather notably. Towards the back of the factory, the farthest point from the gallery’s entrance, there is an open-air space that appears to be some kind of derelict courtyard. Fauna has sprung up in the uneven dilapidation, splashing a wet green on the dry red-brownness of the building. Within this courtyard is what appears to be, on first glance, some sort of truss. It is the kind of structure that looks more like an architect’s scale model than a sculpture, with its uniform dimensions and regular geometry — or, what was once regular geometry. The truss has lost shape; its horizontal plane has twisted and shirked support beams so that it now looks like a bridge in the cyclonic grip of a tornado.

A middle-aged man approaches me as I take in the piece, and soon begins to explain the story behind what is obviously one of his favorites. Apparently, the artist, a Utahan, used a special density fiberboard that deforms with moisture and changing temperatures, effectively creating a structure that deforms — or decays — with time. The man, who is another artist with work on display, tells me of the structure’s uniform shape and perfect construction when it was brought in some weeks earlier, and I am newly rapt by the truss.

I am enthralled by the idea of exhibiting a decaying sculpture in a gallery that is already far along in its own process of deterioration, and I absorb it as long as I can. The striking juxtaposition that the Utahan has created is stunning, and furthermore, quite provocative.

The contrast in scale between the sculpture and old factory brought to mind another contrast, this one at once more and less physical, but certainly more Swarthmore.

Often when I walk down Magill Walk, I feel that I’m in the presence of giants. The trees line each side, and Clothier Hall, Parrish, and McCabe feel like fortresses overlooking a medieval bailey, through which I meekly walk to another meal at Sharples. Though the image is anachronistic and ephemeral, I think it is representative of a larger train of thought. I walk through a valley lined by monuments to academia, tradition, and intellect each and every day.

For me, an English Literature major and aspirant writer, the face that appears on these monuments is that of Jonathan Franzen ’81. His fiction and nonfiction writings stack up to a body of work that looms over me like the régime of oak trees on Magill, especially since I’m writing my thesis on Freedom this fall. There is a motto, which I encountered in Jeffrey Eugenides’ The Marriage Plot but has much deeper roots, that says that we, as the rising generation of youth, must kill our fathers. No, I’m not speaking of patricide, Oedipal or otherwise, nor of killing Jonathan Franzen, but rather of knocking down idols and traditions in order to find truth. Similarly, Ezra Pound’s modernist motto was “make it new,” something that he and the modernist hordes strived to accomplish throughout the twentieth century.

Let’s bring decay back into the equation. Seeing as these monuments, be they artistic or scientific or simply monumental, were erected many years, decades, or centuries ago, are they not decaying with age? Each passing moment must pile atop any intellectual achievement, bringing the weight of time, gravity, and new contexts down upon the monument, and perhaps even forcing cracks to crawl down the edifice. This thought knocks the awe and intimidation out of me in my daily ambling, and propels me to find and attack these splintering obelisks.