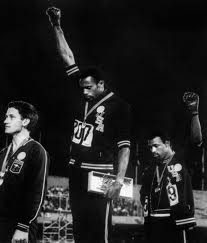 As the last strains of the Star-Spangled Banner lingered over the Olympic stadium, the United States 200-meter dash medalists Tommie Smith and John Carlos were met with a salvo of jeering.They stood with their heads bowed, black-gloved fists extended upwards in a symbol of solidarity with the Black Power movement sweeping through the states. Their feet, donning black socks in a gesture towards Americans living in poverty, are planted outside the frame of what has become one of the most iconic photographs in the history of the Games. Smith’s black scarf and Carlos’s rosary beads, representing black pride and the victims of lynching, have also faded from public collective memory. These details are overshadowed by the resolute lines cast skyward in support of a struggling civil rights movement.

They stepped from the medal podium into the heat of 1968 Mexico City and the wrath of the International Olympic Committee. Immediately expelled from the Olympic Village, they returned home to stinging backlash, perhaps best captured by a Time Magazine headline parodying the motto of the Games — “Harder, Faster, Stronger” — with the words “Angrier, Nastier, Uglier.” The athletes, founding members of the Olympic Project for Human Rights (OPHR) established in 1967, received hate mail and death threats from an outraged public.

Carlos, whose activism has continued long after the shutter closed in 1968, will be speaking at 7 p.m. tomorrow in Stokes Auditorium at Haverford College. His discussion, which will include Haverford Associate Professor of History Alexander Kitroeff, aims to address questions on the intersecting responsibilities of public figures and activists through the retelling of his path to the ’68 Olympic Games and the trajectory his life took afterwards.

A major cause of contention following the Games in 1968 arose from a feeling that national problems did not warrant an airing on a venue as publicized as the Games. The conflicting visions of the Games as a celebration of international camaraderie and a repression of internal disputes continue to surface in modern times. Leading up to the 2008 Beijing Games, rumors circulated of athlete boycotts over the troubling human rights abuses inflicted on the Tibetan people by the Chinese government; in Mexico, conflicts between private and state interests are already surfacing over preparations for the 2016 Games.

“[The Olympic Games] function as a venue of inclusiveness and understanding among different nations as well as take patriotism to nationalist extremes,” Kitroeff said in an e-mail. “As we speak, there are ongoing protests in Rio de Janeiro in some of the favelas, the poor neighborhoods which may be razed to make way for the infrastructure of the 2016 Olympics.”

Kitroeff remembers watching the infamous medal ceremony as a young boy in Greece, and cites the increasing emphasis on profit and the media frenzy surrounding the Games with heightening audience obsession with its athletes. One need only recall the coverage of London to recognize the scale of the world stage set by the hordes of news agencies and their loyal contingents of viewers. The 1968 Games marked the beginnings of this consumption-based coverage, and Carlos and Smith recognized their opportunity to send a message.

But for the IOC’s lackluster response to an OPHR petition in 1968, Carlos and Smith may not have participated in the Games at all. The petition called for a restoration of Muhammad Ali’s title as boxing champion of the world, which had been stripped from him following his refusal to fight in the Vietnam War; the removal of white supremacist Avery Brundage as head of the United States Olympic Committee (Brundage was additionally infamous for his role in securing the 1936 Olympics for Hitler in Nazi Germany); and a ban on South Africa and Rhodesia from the Games in solidarity with their black communities struggling for equality. Athletes prepared to boycott the games if the IOC refused to meet their demands. However, when the IOC leveled a ban on South Africa and Rhodesia without addressing the petitioner’s’ other concerns, the boycott lost its teeth, and sprinters Carlos and Smith recognized their greatest chance at making a statement was in participating — and medaling.

Rhodesia and South Africa’s participation in Mexico City would have produced a different narrative of the 1968 Games — a less powerful one, in Kitroeff’s opinion. “I sympathize with protests by athletes, but individual boycotts of [the 1968] Games would have not been very effective,” he said. “Nation-based boycotts, such as those of the US during the Moscow 1980 Games and of the Soviet Union of the Los Angeles 1984 Games, are both considered to have failed in their goals … as John Carlos and Tommie Smith showed, it’s better to be there and protest than to stand outside.”

Carlos has continued his activism in the public sphere despite the challenges he faced after the 1968 Games. He served as a torch-bearer for the 2008 Human Rights Torch, which travelled parallel to the Summer Olympics torch relay to raise awareness of China’s human rights record. He spoke at the Occupy Wall Street movement, telling audiences, “Today I am here for you. Why? Because I am you. We’re here 43 years later because there’s a fight still to be won. This day is not for us but for our children to come.”

Event Coordinator Stephanie Zukerman “The bridge between sports (public figures) and social justice seemed particularly relevant in an Olympic year. That moment when John Carlos and Tommie Smith raised black-gloved fists on the Olympic medal stand was not only one of the most famous moments in Olympic history, but incredibly controversial at the time, and inspirational to so many black-Americans at the time. Dr. Carlos suffered for many years as a result of racism after those Olympics, but has become a hero to so many people. That event was so significant to so many people, and I wanted his story to be shared with the younger generation who did not live through it.