Club Sports » Warmothers to Compete in Virginia, Partner with Without Limits 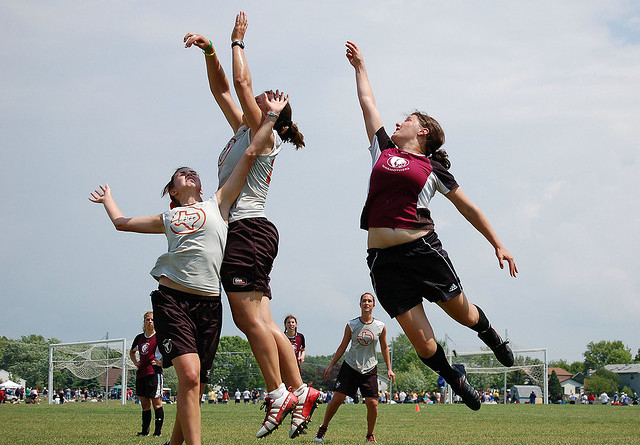 Only a week into the fall semester, the Warmothers, Swarthmore College’s women’s ultimate Frisbee team, has already hit the ground running. This weekend, the team will attend Virginia Fusion, a premier tournament taking place in Martinsville, Va., over seven hours away from Swarthmore. There, they will be on the same field as some of the top teams in the country, including the Virginia Hydra, Ohio State Fever, North Carolina Pleiades, and Delaware Sideshow, all of whom competed in the Division I Women’s College Championship earlier this spring.

Although this level of competition appears intimidating, the Warmothers remain undaunted due to their experience: at last year’s tournament, they upset Hydra to go undefeated in pool play and lost a close contest to Dartmouth Princess Layout, the eventual champions, in the semifinals. The loss of last year’s strong senior class may translate into different results this time around, but team captain Emily McAfee ’13 still views the tournament as a tremendous opportunity for growth.

“Fusion is the perfect fall season kick-off because it is both demanding and supportive. Having graduated four key starting players, our team is in the midst of redefinition,” she said. “The tough competition we will see at Fusion will force us to consolidate our game early on in the season, before we bring new players into the mix.”

Aside from the high level of competition, Fusion is also noteworthy due to the involvement of Without Limits, an organization that promotes women’s ultimate and espouses “Community. Competition. Empowerment.” as its motto. Founded by club players Sara Jacobi and Michelle Ng in 2010, the group was born out of the desire “to foster relationships within the women’s ultimate community at the youth, college, and club levels, as well as promote and further the growth and development of the women’s division”, according to organization’s website.

Since then, Ng, a former standout for Showdown, the women’s ultimate team at the University of Texas, and elite clubs like Molly Brown and Slackjaw, has taken the lead in organizing events across the country, for which she has received praise from all corners of the women’s ultimate community.

“Staying true to the mission of Without Limits, Michelle has made herself available to the leadership of our team in every way she can,” McAfee said. “She has answered the most random emails from me at the most random times of the day, and is always asking how she can help us more.”

Without Limits is unique in that its tournaments are accompanied by skill clinics taught by some of the most knowledgeable and accomplished names in men’s and women’s ultimate. Not only do these workshops cover various on-the-field topics such as “One-on-one: Gaining the Edge on Defense” and “Skills and Drills for Teaching Your Rookies”, but also organizational issues like “Practice Planning” and “How to Build a Winning College Program”. For McAfee and the rest of the team, such instructional sessions are nearly as valuable as the experience they will receive while playing.

“After regular play on Saturday, each member of our team will participate in two 45-minute skill clinics, focusing specifically on aspects of the game we struggle with. The chance to participate in these clinics, which are provided at no extra cost, is one of the primary reasons we are traveling so far so early in the season,” McAfee said.

Over the past few years, the team, which has attended other tournaments hosted by Without Limits, including Women’s College Centex, Keystone Classic, and Queen City Tune-Up, has developed a close relationship with the organization. Now, the two are partnering on November 17 and 18 to host a clinic on Swarthmore’s campus. The clinic, which is designed to develop leadership and teaching abilities in team captains, is modeled after a similar event sponsored by Without Limits at Grinnell College earlier in the year.

Despite such efforts, women’s ultimate still doesn’t receive as much coverage as men’s; coverage of the sport on ultimate-specific websites such as Skyd Magazine and Ultiworld, and larger outlets like ESPN, has been extremely male-dominated. Female players themselves feel that they are held in lower regard than male players. McAfee and team captain Sachie Hopkins-Hayakawa ’13 stressed that this discrepancy was most apparent in mixed games, where men and women compete together, usually in set gender ratios such as 4:3 (men to women) or 5:2.

“There is the continual need for women to prove themselves to their own male teammates on mixed teams,” Hayakawa said. “I’ve found that unless a woman is constantly performing at a higher level than some of her male teammates, she will often be looked off and under-utilized.”

“I’ve encountered a perpetual need to prove myself when playing with men. The underlying assumption is almost always that women are inferior players,” echoed McAfee. “If I am not extremely assertive and outspoken during pickup or other mixed situations, I will rarely touch the disc, despite my years of experience and a leadership position on our own team. I know a lot of other players on our team feel the same way.”

As ultimate continues to develop into a more popular, widely appreciated sport, groups such as Without Limits and the Warmothers, and organizers like Michelle Ng, are increasingly important to provide women opportunities to play ultimate and to improve their game.

For more information about the November clinic, visit Without Limits’ website.

0 thoughts on “Warmothers to Compete in Virginia, Partner with Without Limits”