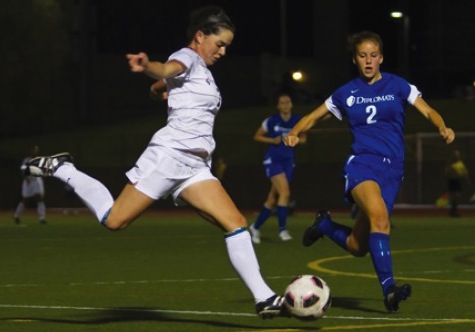 Under head coach Todd Anckaitis, the Swarthmore women’s soccer team has enjoyed consistent success during the past six seasons. Over that period, the Garnet has missed the Centennial Conference playoffs only once, after finishing sixth behind Ursinus in 2010 due to a head-to-head tiebreaker. Last season, the team continued its impressive play, finishing third in the Centennial (12-7, 7-3 CC) and reaching the semifinals where it fell 1-0 to Gettysburg. The program, however, has not made it to the Centennial final since 2006 and is still looking to break through with its first Centennial title.

The departure of five seniors and midfielder Alexa Ross ’13, who was named to the All-Centennial first team in 2011 after earning a second-team spot and an honorable mention in her first two seasons, will present a challenge for the promising Garnet, especially at the goalkeeper position; replacing last year’s net-minder and three-year starter Marie Mutryn ’12, whose 15 career shutouts and 0.89 goals against average (GAA) are second best in program history, is no small task.

Continuity is also the name of the game on defense as the team returns the entire corps from last season which will be led by Captain Ari Spiegel ’13, who started 18 of 19 games and was named All-Centennial honorable mention. Members of the class of 2015 will also be key contributors to back line in 2012 as the Garnet returns Ellen Bachmanhuff ’15, whose 1507 minutes played were the most among field players last season, Elyse Tierney ’15 (14 starts, 1487 minutes), Julia Murphy ’15 (11 starts, 988 minutes), and Rehanna Omardeen ’15 (7 starts, 776 minutes).

The return of so much talent, coupled with the significant success of the previous season, has given the team high, yet tempered hopes for the upcoming season.

“We have very high expectations for ourselves this year, but we will continue to approach each game with the same intensity and focus regardless of the opponent,” Beth Martin ’13 said.  “As it is every year, our goal is to play the best soccer we can, and if we achieve that then we will be very tough to beat.”

Picked to finish third conference’s preseason coaches’ poll, the Garnet has the skill, experience, and coaching to compete for a title, but will have to contend with frontrunner Johns Hopkins University, winner of seven straight conference titles. Over the past four seasons, the Blue Jays have been outright dynastic, compiling a 76-7-5 overall record (37-3 CC) and finishing in the Sweet 16 of the NCAA Tournament or better each season. Though they graduated eight seniors in 2012, Johns Hopkins returns Hannah Kronick ’15, whose 19 goals were best in the Centennial in 2011.

Last season, on October 1, the Garnet hosted the Blue Jays in a tight contest that saw a Kronick goal in the 23rd minute answered by an equalizer from Sindelar only twelve seconds later.  The Jays found the back of the net again in the 26th minute and led until the last ten minutes of the game when Famiglietti scored to tie it up at two apiece. Although the game looked like it would go to overtime, Johns Hopkins earned a 3-2 win in regulation, scoring off a corner kick in the 87th minute. However heartbreaking it was, the loss was also an important lesson that even the most formidable teams can be beaten on a given day.

“Hopkins is just another team. We are familiar with playing ranked teams, and we’re also familiar with being a ranked team and having to defend that spot in the Top 25,” Martin explained. “We want to beat every Centennial team we face, but beyond that we want to make a splash within the NCAA again this year.  This is an extremely talented group, and I’m so excited to see what we can do this season.”

Captain Cassie Strawser ’13 added, “the expectations for the team are very high. We believe that we have so much talent and great team dynamic that can really lead to an outstanding year for us. Last year our record was 12-7, and we hope to improve on that record this year and make it to the Conference playoffs again. If we play to our full potential, we believe that we will be able to win our Conference.”

The Garnet split their first two games of the 2012 season with a 1-0 loss to Misericordia on Friday and a 1-0 victory over Wellesley College on Sunday as Amanda Bosworth ’16 scored the only goal and Reba Magier ’16 earned the shutout in goal.

Swarthmore returns to play at Clothier Field on Wednesday hosting Widener at 7:00 PM.