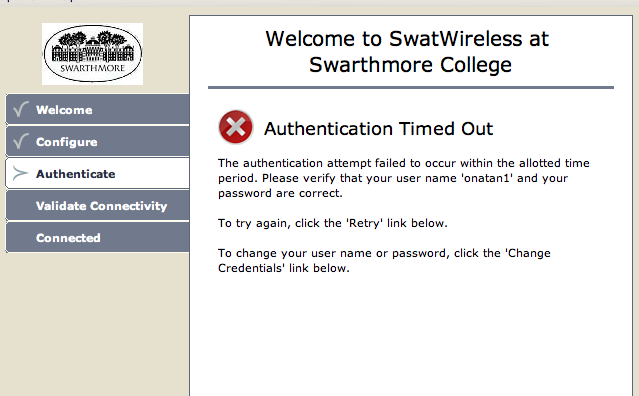 Imagine the following scene: you open your computer, intending to go on the Internet to read one of the many articles for class that your professor posted on Moodle. Upon opening your browser, you’re greeted with a familiar screen: not your homepage, but the remediation network, informing you that you’re required to reinstall anti-virus software that you’re probably already installed at least twice. The remediation network is obviously everyone’s favorite place to be on Swarthmore’s campus. Additionally, it’s perhaps the most representative symbol of Internet here at Swat.

Complaints about our Internet quality are commonplace and quite justified. For a school of our caliber and academic reputation, reliable, top-notch Internet is a must. In 2012, it’s a necessity both to the basic functioning of the college and to maintaining a strong campus community for students that live here. Frankly, I think it’s perfectly reasonable to question our Internet access, because of both how it appears to be below par and how many of the problems are quite frustrating in nature.

Now, before I talk about any specific issues with Swarthmore’s Internet, I want to make one thing quite clear: I am not, by any stretch of the imagination, highly literate in computing and Internet technology. I don’t profess to have deeply technological knowledge of how networks and Internet connectivity work. What I do know, however, is that many of the problems we experience seem to defy common sense, and don’t need a technical explanation.
The first such issue I alluded to in the beginning of the column: getting connected to the Internet at Swarthmore. The number of steps and amount of time needed to connect your computer to SwatNet is too damn high.

I have spent time on a variety of college campuses through my travel with Peaslee, and Swarthmore’s network is by far and away the most complicated to connect to. As an illustrative example, NYU offers visitors a network that they can connect to easily, that does not require them to download and install any software. By contrast, visitors to our campus must get login information from one of the libraries, and they must also install the same antivirus software that all of us love so much in order to connect to our Internet. Are these steps really necessary? Of course NYU is a significantly larger school than Swarthmore, but it seems highly improbable that they’re needed in order to maintain the security of our network. An easy solution to implement could involve a visitor network that had some restrictions on the type of activity allowed, such as downloading large audio and video files, but permitted easy access for those visiting our campus.

Beyond getting connected, a larger day-to-day problem experienced by plenty of Swat students is the reliability of our Internet. There’s a reason that lots of Swatties joke when they receive an email from ITS telling them that the network has just been down, and that service is now restored: it happens with alarming frequency. In the nearly three years that I’ve been a student here, I can’t remember a month where there were not at least a few instances when Internet service was disrupted. A particularly good example of this problem was relayed to me by one of my hallmates. During preregistration for the first year class this August, the network was overwhelmed by the number of students trying to register, and crashed.

A network designed for a college campus should be able to handle daily traffic levels, including expected peak traffic times like the incident listed above, without any problem at all. If it can’t, then there’s a clear need to address that problem and ensure that our service is more robust and able to handle the amount of Internet activity that happens on campus. I recognize that emergencies and accidents happen, and that those can never be completely controlled.

But at the same time, those should be extremely rare and not closer to the norm. Without having an advanced degree in information technology or computer networking, I hesitate to make detailed suggestions as to how we should go about fixing these persistent issues that plague our campus. But at the same time, I do understand that they are serious issues that absolutely need to be addressed in a serious manner. For Swarthmore not to have highly reliable, fast Internet in 2012 is, to be blunt, embarrassing.

As conceited as it might sound, we are a leader among academic institutions in the U.S., which means that we should have top-notch Internet capabilities as a part of that. And if that means investing more money into developing a better, faster, more stable network, then so be it. As a reasonably well-educated observer who normally hates this idea, throwing more money at the problem may be quite helpful here. At the bare minimum, it would allow the college to purchase more bandwidth, which would improve the speed of our connection. Clearly, that won’t solve the entire problem, but it would at least be an important first step towards improving our Internet’s quality. Regardless of the technical fix, something has to change.

0 thoughts on “Observing the Higher Powers: We Need Better Internet”