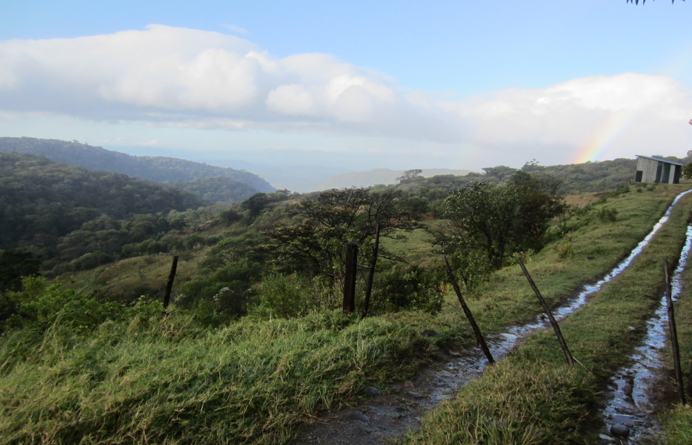 Taryn Colonnese ’13 is an Educational Studies and Soc/Anth Special Major from Easton, Connecticut. She is currently studying abroad at El Centro de Educacion Creativa (The Cloud Forest School) in Monteverde, Costa Rica. The Daily Gazette interviewed her to find out what she’s doing, where she’s going, and what she loves most about study abroad.

So I heard you’re learning to speak Spanish while you’re in Costa Rica? Is there any slang you can teach us?

Right, I didn’t know any Spanish before coming here! One word that is thrown around ALL the time, though, is “rico(a),” which can be used to describe anything from delicious food to a good sleep to a really fun night out. I guess it would be the equivalent of “Great!” in English? It definitely threw me off when I first started hearing it, because I heard and used it first in the context of food (“¡La cena estuvo muy rica!”), so I just assumed it meant “delicious.” Then, one day when I was at the beach with my family, my mom kept describing the water and waves as “rica” and I was like… the beach is delicious? I soon came to realize it’s a really inclusive adjective and now use it to describe everything.

Another huge phrase in Costa Rica is “Pura Vida” – literally “pure life.” It’s ALL OVER. I don’t know where or how it originated, but it’s used in all the touristy industries, and can be used to describe an awesome time, to say goodbye, to say hello, to brush off sympathy after a sad story… anything. Another interesting note about Spanish here is that they only use the “usted” form — even parents with their children. The “tu” form is strictly reserved for lovers — but even my host parents use “usted” with each other. I’m going to have a whole new verb conjugation to learn when I get back to the States, because they don’t even teach the “tu” form here!

Where have you traveled thus far? What have you been up to?

Monteverde is up a giant mountain and it takes forever to travel anywhere, so I haven’t been able to do many weekend trips. I am going to Nicaragua next week, though, which I’m really excited about! Afterwards, it’s spring break for school, so I’m going to the beach with my host family.

As for what I’ve been doing in Monteverde — my first month was spent taking Spanish classes, which were fun and SUUUPER helpful. It was an awesome month because I could actually feel and hear myself improving in my communication skills every day. Then I started my internship at the Centro de Education Creativa (a.k.a. Cloud Forest School) with a second grade classroom. I’m basically a teaching assistant, but I’ve recently gotten lots of opportunities to take on big responsibilities in the classroom! Last week, for example, my lead teacher was unexpectedly sick all week. The school doesn’t have any funding for substitutes, so I basically took on the role of lead teacher for a week. It was incredibly intimidating and tiring, but a fantastic experience.

In my free time, I’ve been doing a TON of hiking and walking. Few people have cars here because they’re so expensive, so walking is a major way of transportation. I’ve been loving that! It’s really nice to be able to have physical activity naturally fall into your lifestyle. Also, it’s beyond gorgeous here, so walking and hiking are SO enjoyable.

What have been your best experiences since you’ve been abroad?

1. This past weekend, I went hiking in the Monteverde Reserve with some of the other interns. We hiked up to the very top of the mountains so we were in the clouds that make Monteverde’s forests so famous and biologically diverse. It was an incredible feeling to actually be walking in the clouds — I can’t really describe it. Everywhere we looked around us was white and misty and you could see the masses of mist flying past you — around and above you (the clouds move SO fast here, because we’re so high up). It was just kind of one of those breathtaking how-am-I-so-lucky-to-be-here-right-now moments.

2. Eating fruit, all the time. So many delicious fruits grow locally here and I have definitely been taking advantage of that — eating lots of delicious bananas and mangos, melons, and pineapples, and also trying out different fruits like guanabana and guayaba.

3. Getting to know my host family and feeling like I’m becoming a part of the family, rather than imposing myself on them. I’ve especially been enjoying cooking with my host mom. She is an INCREDIBLE cook, and it’s so fun to help her out in the kitchen and also to teach her some of my favorite things to make. There have been many times when she’s told me I’m not allowed to go back home because she wants me to stay here and cook with her all the time, which is such a nice thing to hear! Especially thinking back on what it felt like when I first got here, how awful I felt that I couldn’t speak Spanish and couldn’t communicate with them that first week, it’s so comforting to feel like I’ve got a place in this family now.

4. One Friday, we had a “staff work day” at school, which consisted of a staff trip to the beach. It was such a fun day — a school bus went all around Monteverde and picked up teachers, administrators, other school staff, and their families. We all loaded on with coolers full of food and drinks, lots of musical instruments and beach things. The whole bus ride was hilarious because there were kids and students and teachers and parents all together, with guitars playing and people singing songs. We spent the day lounging, grilling, swimming, and eating at this nice, quiet beach. It was a great way to get to know some of the other teachers in a super informal environment!

What’s it like having some distance from all the work and stress of Swarthmore life?

IT IS AWESOME. This time abroad has been showing me how important it is to have things in your life other than work. It’s really nice to not be bogged down with a million things to do always, because it means I get to spend my time actually enjoying where I am and who I’m with, rather than holing myself up with my brain. As a result, I’ve been able to spend a lot of time with my [host] family — cooking with my mom, just sitting around and talking, playing with my little sisters — and I’ve read more books for pleasure in the past two months than I probably have since I started at Swat. It’s just a totally different feeling here. I’m still doing a lot of work, but it’s not all-consuming. I’m just so happy. I think it’s definitely a change I needed.

Advice for all Swatties: GO ABROAD. This has been one of the best experiences I’ve had so far. Especially as an Education major and someone seriously considering going into teaching, this program at the CEC is incredible. It’s such a nice change to have a semester where I’m teaching, rather than taking classes. It’s an amazing opportunity to apply a lot of the things I’ve been learning in Ed classes at Swat — plus it’s a nice break from taking such a theoretical look at things and instead putting them into practice. More generally, nothing beats being able to immerse yourself in a different place — especially one where you might not feel very comfortable at first (whether it’s a language barrier, never having been on your own before, whatever). You learn a ton about yourself: the kinds of things you want and need to be happy.

Get out and do what the locals do! Eat the food, take the public transportation, and explore the hangout spots and bars. Try to have conversations with the people who live where you are — you’ll learn SO much and you might make some new friends! Just soak up everything — it’s such a special experience!