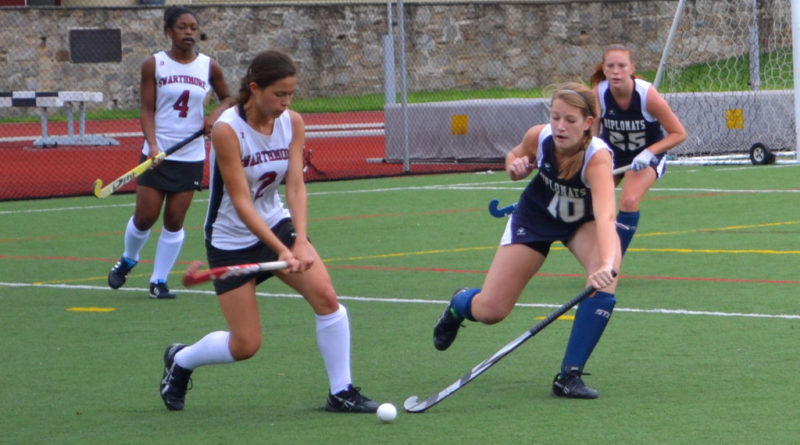 It was a disappointing beginning to Conference play on Saturday, as the Swarthmore field hockey team was blanked by the Franklin & Marshall Diplomats 3-0 in front of a home crowd at Clothier Field.

The loss extends the Garnet’s losing streak against Franklin & Marshall to four. Swarthmore’s last win against the Diplomats came in October 2007, when they came away with a 3-1 home victory.

On Saturday, the Garnet attack, which had managed 11 goals in the first three games, was completely stifled by an aggressive F&M defense. The Garnet managed just four shots and just one on goal, taken by midfielder Aarti Rao ’14. Comparatively, the Diplomats took twenty shots with ten on goal.

Franklin & Marshall’s Chelsey Talhelm got the scoring started early, scoring off an assist by Steph McDonald and putting the Diplomats up 1-0 five minutes into the match. Ten minutes later, Talhelm provided the assist for Becky Willert’s score. Willert added a second goal in the last period, off Allison McLaren’s assist, to complete the scoring. Goalkeeper Gabriella Capone ‘14 cited a lack of aggression on defense as a key factor in the outcome. “We didn’t step up to the ball soon enough,” Capone said, “[and] this gave F&M the opportunity to gain an extra 10 or 15 yards towards the goal.

“I think we can solve this by having people being aggressive and stepping up to the ball sooner. This should eliminate a lot of scoring opportunities for the other team too. If we can get organized before they get into the circle, we’ll be able to pressure them to the side and take away the scoring sweet spot.”

Capone played the entire game as goalkeeper for Swarthmore, finishing with six saves.

“Our biggest issue today was that we gave [F&M] too much ground when they had the ball,” coach Lauren Fuchs said in an email. “[Offensively], we needed to step up sooner and pass sooner.”

Forward Nia Jones ‘14 cited a relative lack of experience on the team (nine first-years are on the current roster) as a contributing factor to the team’s slow start this year.

“It’s going to take some time for us to really get used to playing with one another and bring it all together into a cohesive team,” Jones said in an email. “F&M had that cohesiveness that we are still working for- [they] came out ready to play from the beginning while it took us a little longer to get to that point and they definitely took advantage of that and capitalized on their opportunities.”

Though Capone managed to keep the game within reach, F&M broke through several times on consistent offensive pressure. Though Talhelm’s goal came off of a penalty corner followed by an excellent quick pass from McDonald, both teams played a relatively clean game.

“Gabby played a great second half, and we fought hard to get back in the game,” Fuchs said, who added that she felt the team’s mistakes were certainly not insurmountable. “We have another challenging game on Wednesday and need to make improvements from today’s game and we will be fine.”

“We have a very young team that will make huge improvements from game to game,” Ranshous said.

Jones echoed her teammate’s belief that the inexperience issue is one that can only improve going forward. “We have so much potential [that] once we all finally get used to playing together the sky is the limit,” Jones said. “As disappointing as yesterday’s loss was, everyone is remaining positive about the rest of our season.”

On Wednesday, the Garnet fell to Ursinus 6-3. The team resumes play on the road at Dickinson on Friday for another conference matchup. The start time is scheduled for 4:00 p.m.