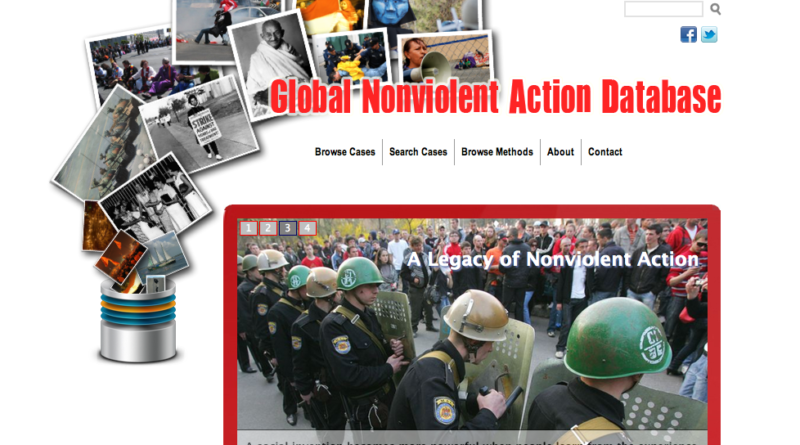 On the 10th anniversary of the 9/11 terrorist attacks, as a decade of violence from New York City to Afghanistan came to a close, a group of Peace and Conflict studies students and teachers offered a new solution to the conflict: nonviolent action.

The Global Nonviolent Action Database, an online compendium of nonviolent action campaigns from around the world and across the millennia, was symbolically released on Sunday as a reminder that peaceful responses to terrorism do, in fact, exist.

“The response to 9/11 by the U.S. government has been extremely militarized,” said George Lakey, a research associate at the Lang Center for Civic and Social Responsibility and the leader of the project.

“A lot of people haven’t been able to challenge that, so this is a good time to release the database that has cases of people thinking outside the box, and trying something different than payback,” Lakey said.

The database provides basic information and sources for cases of nonviolent action from all over the world. It identifies nearly 200 methods of nonviolent action and reports cases from 214 countries between 1170BCE and 2011. Cases in all of the modern world’s 196 countries have not yet been found. Each case is tagged by location, year, methods used, and connection with major waves of nonviolent campaigns such as the American civil rights movement.

The 430 cases that comprised the database as of the launch date were researched and written by more than 45 students from Swarthmore, with a few additional cases sent by students from Tufts, Georgetown, and the University of San Francisco.

The vast majority of contributors are Swarthmore students who have taken Lakey’s research seminar “Strategy and Nonviolent Struggle” since it’s creation two years ago.

“You take the class, you learn a little bit about nonviolent action, and you write a case every week that will go on the database,” said Max Rennebohm ’13, Lakey’s research assistant and a junior double major in Psychology and Peace and Conflict Studies. “And while you’re doing that, you’re also learning some theory about how nonviolent action works and what the best strategies are,” Rennebohm said.

Rennebohm spent the summer at Swarthmore on a grant, editing cases and preparing the database for launch in the fall. He will continue to edit unfinished cases and new ones as the research seminar produces more.

Rennebohm estimates that there are another 85 cases that need polishing before they can be displayed online. Add those to the approximately 120 cases that Lakey’s students will produce this semester, the database could surpass 600 cases by December.

The continuing growth of the database reflects the passion that Swarthmore students have brought to the project. “Students spent free time this summer [on the database],” Lakey said. “There’s been a real level of passion from students about this database.”

Ultimately, Lakey hopes that the database will inspire a similar passion for nonviolent action in its audience – particularly scholars of history. “History as a discipline has been weighted on the side of believing that only violence is really worth recording,” Lakey said. If scholars are aware of the history of nonviolent action, he posits, they will be more likely to pursue it in their studies.

He imagined a scholar saying, “Yes, I could do another book about the battle of Gettysburg, but what if I’m the first one to do a book about workers for the pharaohs campaigning for economic justice? Nobody has written about that, but I see in your database that such a case exists. Maybe that’s how I’ll make my mark.”

Scholars, though, are not the only target of the database. “A lot of it is aimed at activists,” said Hannah Jones, a senior Sociology & Anthropology major who has been involved in the project since it’s beginning when she was a first-year. “We wanted it to be a tool. For instance, you can search by tactics, time period, or place,” Jones said.

Such search capabilities will allow activists to easily find precedents for their actions or search for new ideas.

“Suppose you are an activist who wants to do a blockade of the doorway ofPNC bank to keep customers from going in and out,” Lakey said. “You want to know how that works, so you go to the database, type in ‘blockade,’ and there you have it.”

The format of each case – a short, jargon-free narrative alongside more technical source information – and their location online makes the information even more accessible to activists and anyone else interested in nonviolent action.

“The most common thing you hear when you talk about nonviolence is that it wouldn’t work against Hitler,” Jones said. “It’s always what people say. But it did work in a few cases, and using the database I can offer the example of people nonviolently resisting the Nazis in Denmark.”

Lakey told a story to explain the need for the database:

“I was brought up in small town where everything was about being practical, so when I ran into moral questions about the use of violence as an undergraduate, my practical mind immediately got busy, asking ‘what are other ways of handling nastiness, ugliness, or threat?’ And I couldn’t find much about it. I thought about the Battle of Gettysburg; I knew there were rooms full of books about that one single battle. I thought, ‘how perverted is it that there are rooms full of scholarship about one battle?’ Where are the rooms full of scholarship about other ways of going about things?”

The new virtual room of scholarship can be found at nvdatabase.swarthmore.edu.

Now that the database has been released, its managers will have another task to contend with: handling public reaction. “I wouldn’t be at all surprised if we get all kinds of angry letters from people saying ‘I was there in Tahrir Square and that’s not the way it happened!” Lakey said. “I expect and actually look forward to their letters because they’ll help us tweak and improve the database.”