Opinion » This is Your Brain on Indie Music 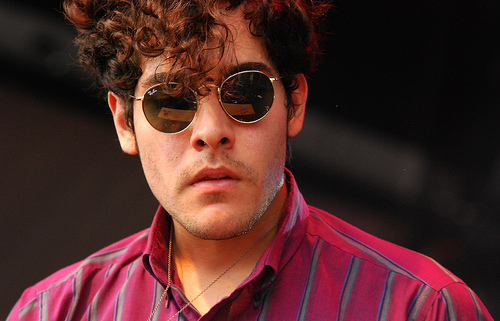 Hey you, Swarthmore freshman. Yeah, you. I see you wearing your keys and ID on a lanyard around your neck. You want to be cool, right? You know what’s cool? Indie music.

As you’ll soon discover if you haven’t already, college kids love indie music. It’s because we’re like, young and intellectual, so we disdain the factory-produced dance pop and soulless hip-hop that controls the top-40 charts and turn to stuff that’s like, real, you know? Also, being in the know about bands none of your lame high school friends have heard will make for some of your sweetest life victories.

You, newly emerged from the safe yet secluding womb of high school, may not have heard some of the bands I am about to mention. Clearly, you’re very uncool. It’s a good thing you’re reading this; I want to get you up to speed.

Here is a starter kit of cool college music (put into very helpful categories that probably describe you) that you need to know if you want to fit in. You can use me as an icebreaker for making hip college friends, or maybe you’ll pretend to have known these bands for years before they got signed to Sub Pop or whatever. Indie cred in spades, bro.

Welcome to college, now listen up:

I hate reading.
If that’s the case, I don’t know why you wanted to come to Swat. Anyway, I made a playlist of the bands featured if you slackers really want to deprive yourselves of my beautiful prose.

I’m adorable, but the kind of adorable that has straight-cut bangs, wears Ray-Bans, and shops exclusively at thrift stores and Urban Outfitters.
Basically you’re a Zooey Deschanel wannabe (Zooey is the “She” in über adorable indie pop outfit She & Him, which you’d like if they aren’t in your top 10 already). You want your life to look like a Sofia Coppola movie: pretty and cute but definitely self-aware. New York’s duo Cults (Madeline Follin and Brian Oblivion) should be right up your alley, despite the creepy name. Follin and Oblivion are film school dropouts (The New School and NYU, respectively) and a real-life couple. They make ’60s inspired, sugar sweet indie pop, but cool and maybe a little psychedelic electro effects and a seriously beefy guitar bring some rock edginess to their pop sounds.

In a similar vein, Tennis is married couple Alaina Moore and Patrick Riley, who met while studying philosophy in college. Upon graduating they sold their possessions, bought a sailboat, and spent a year abroad traveling by sea—which is probably the most hipster/adorable thing you’ve ever heard. All that hipster/adorable had to come out somehow, and it emerged in the form of cutesy, retro girl-group beach pop, kind of like the Beach Boys and The Supremes had a blue-eyed baby. They’re sunnier than Cults, ditching trippy electro effects for lo-fi processing, jangly guitar, and background “ooh” harmonies.

Tennis, “Marathon”
http://www.youtube.com/watch?v=LsbXcJT8yfE
I like Kanye, but College Dropout and Graduation Kanye, not whoever decided that 808s was a good direction.
If you’re this kind of Kanye fan, either you like his particular blend of witty rhymes and retro sampling, or you like to play beer pong and Kanye just happens to make great party rap.

If you fall into the first group, you’ll like Gorilla Warfare Tactics. GWT is a trio of NYU students, composed of Abhi Kanakadandila and twins Vivek and Vikram Nayar. Though sans EP, they’ve been generating a lot of hype, with their smooth, straight flow and old-school hip-hop feel. Don’t let the phrase “old school” turn you off because these guys are raw.

If you’re the other kind of Kanye fan—which all of us are to some extent—you should check out Hoodie Allen (Steven Markowitz). Like frat rap greats Asher Roth and Chiddy Bang before him, Hoodie is all about fun, feel-good party music. It’s hard not to like his addictive blend of indie pop samples and ultra clever wordplay. This guy spits punchlines like it’s his job (which it is, since he quit working at Google to pursue his rap career).

I believe that if it doesn’t have guitars, it ain’t music. I just want to rock.
Canadian hardcore band Fucked Up is, in fact, not fucked up. They’re awesome. Their music is well thought-out and more melodic than you might expect. In their lyrics, they comment on everything from the plight of Canadian sex workers to the origins of life. That being said, it’s still hardcore, so you can still rock out to blistering guitar riffs and gnarly growled vocals.

Kentucky’s Sleeper Agent is rollicking, sparking, raucous, good-time rock ‘n roll. They’re young (the female lead singer is eighteen, and the rest of the band members have barely entered their twenties), they’re fun, and they know how to jam. Their signature sound incorporates beefy guitar licks and merry boy-girl vocals.

The Kills, another band that likes the boy-girl vocals, makes feverish gothic blues-punk. Does that sound weird? It’s not, it rocks. It’s steamy alt rock, and taking things slower than the more frenetic Sleeper Agent. The guitars are monstrous—on their latest record, guitarist Jamie Hince (also Kate Moss’ husband, as of July 11 this year) apparently played through seven amps simultaneously. Although they aren’t afraid to experiment with little electro flourishes, blues is at the core of their style.

Fucked Up, “Queen Of Hearts”

I like European pop stars who aren’t afraid to experiment a little.
Okay, so you’ve decided that Lykke Li and Ellie Goulding are awesome. What’s next? Try Oh Land (Nanna Øland Fabricius… I promise that I didn’t pick Oh Land just so I could do the Ø), a Danish singer-songwriter and record producer. She’s offbeat, experimental electropop, marrying mechanical electro noise with a lovesick indie singer’s soul. Her voice is the kind of fragile that indie favors these days, and she likes delicate little xylophone effects; but she plays with a dubby bass and a heavy kickdrum.

Lana Del Rey (Lizzie Grant) is an old soul in today’s scene. Her songs sound like a modern interpretation of glamorous old Hollywood ballads: sexy, dark, and more than a little melancholy. Her smoky jazz voice is perfect for her sultry lyrics, layered on top of swirling strings and a slow beat: “Let’s take Jesus off the dashboard / Got enough on his mind / We both know just what we’re here for / Saved too many times.” It’s so wrong, but so hot.

Lana Del Rey, “Diet Mtn Dew”
http://www.youtube.com/watch?v=mmHQAV_6vMg
I like electro bass that makes me feel so dirty I need to shower.
These are good days for bass indeed. Have you heard of dubstep? It’s a style of electronic music that originated in London. It has a dark, grimy sound that incorporates a lot of bass—wobbly, distorted, overwhelming bass. It’s not for everyone, but it’s influencing a lot of today’s popular dance music. If you’re interested, here are some suggestions: Rusko, “Hold On (feat. Amber Coffman) (Sub Focus Remix)”; SBTRKT, “Wildfire (feat. Yukimi Nagano)”; Bassnectar, “Blow.”

But not all of us are dubstep nerds who play around in basements with low frequency oscillators, so… If you haven’t heard of L.A.’s Glitch Mob, you will soon. They’ve been selling out venues like hotcakes, and for good reason. Their style of electronic dance music combines catchy electro loops, booming hip-hop bass, and dirty basslines. This music pumps you up to go and do something awesome.

Skrillex (Sonny Moore, former frontman for post-hardcore From First To Last) has his roots in rock, but now he’s doing some crazy electronic shit. He’s classified as a house/dubstep producer, but he’s become so popular because his stuff sounds like nothing else. It’s glitchy and schizophrenic, and the bass is some kind of otherworldly filth.

Skrillex, “First Of The Year (Equinox)”

I am a city kid who isn’t afraid of fusion.
It was hard for me to narrow down the bands and the songs that I wanted to feature here. I mean, I could sit here all day and type about how much I like Clams Casino, Ghostland Observatory, and Pretty Lights, but neither of us has the time for that. (But do you see what I did there? Pro.)

It’s really hard to pick a genre that Little Dragon fits into. They pull from electropop, disco, jazz, R&B, and funk, and they experiment with what cool effects they can throw on top of all that. They end up with some really cool, artsy, catchy songs. Little Dragon’s lead singer Yukimi Nagano has a rich, soulful jazz/R&B voice that somehow goes perfectly with every genre the band plays with.

I am the kind of stoner who likes rap/R&B.
Stoner rap is its own genre: I guess the words “high,” “roll up,” and “green” are perfect rap double-entendres. In either case, if you’re a stoner who likes rap/R&B, there is no shortage of indie acts for you. Curren$y (Shante Anthony Franklin)—whose legitimacy should not be compromised by the fact that both he and Ke$ha have $’s—smokes a blunt in basically every photo taken of him. Or maybe he smokes blunts all day, e’rryday, and photos taken of him are going to capture this. His favorite subject is weed, which he raps about in a laidback stoner’s drawl on top of spacey, soulful soundscapes. It’s the perfect blend of complex and chill to accompany your (cough, cough, hacking cough) recreational activities.

If you haven’t heard of 21 year-old The Weeknd (Abel Tesfaye) then you seriously live under a rock. This unsigned R&B singer has gotten big ups from Rolling Stone, Pitchfork, SPIN, New York Magazine, Stereogum, MTV, The Guardian, etc… Seriously, get with it. His mixtapes House of Balloons and the recently released Thursday are on superheavy rotation in colleges (and music magazine offices) everywhere. His voice is smooth and pretty like Drake’s or Bruno Mars’, so you don’t expect the dirty talk in his lyrics: (from “Loft Music”) “Blue ball queen / Take your fucking seat, baby / Or ride it out now / Now I know you want to scream, baby.” Now put that sexy on top of his experimental, ambient, echoing electro noise, and you got yourself a Wednesday night.

Curren$y, “On G’s”
http://www.youtube.com/watch?v=B24rhvCaUus
The Weeknd, “Thursday”
http://www.youtube.com/watch?v=rDxJjScQgQI
I am the kind of stoner who wants to inhabit a magical musical room where the walls are padded with cushy synths.
Good timing, since chillwave is having a moment. Chillwave is a genre of electronic music that is all about hazy, lush dreamscapes. I mean, it’s got “chill” right there in the name. When we talk chillwave, we’re talking an ambient sound, quite minimal, often lo-fi, and heavy on the synth. This music tries to be trippy.

You can’t talk about chillwave without knowing about Washed Out (Ernest Greene) and Toro Y Moi (Chazwick Bundick, which is kind of a more amazing name than “Toro Y Moi”). Washed Out is a little drowsier, a little more ambient, a little more nap-in-the-sunshine. Toro Y Moi is more up-tempo, making use of plucky bass and guitar to break up all that dreamy synth fuzz.

Neon Indian is another chillwave favorite—their EP is called “Psychic Chasms,” which is the best possible description of the kind of music Neon Indian makes. They’re the most poppy of the three mentioned but make up for it with lots of distortion. I embedded their latest single, “Polish Girl,” which is the poppiest I’ve heard of Neon Indian yet and not necessarily indicative of all their work, but it’s just so good.

Questions? Comments? Adulatory praise? Email me (alee22, yes, 22, I am aware of how ridiculous that number is for a Swarthmore email address) or comment below.

6 thoughts on “This is Your Brain on Indie Music”