Campus Journal » One Stitch at a Time 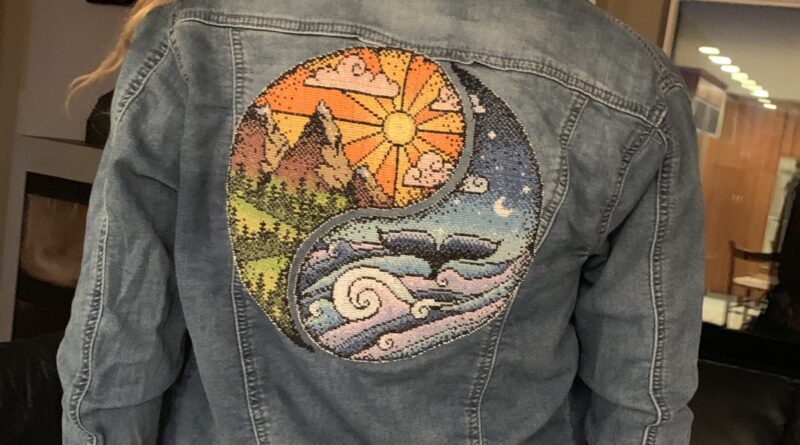 I got into crafting midway through my senior year of high school, when I decided to knit a hat for the Women’s March in January 2017. While I had knitted as a little girl, it never had gone particularly well, and I found that I was able to master the basic techniques far more easily as a young adult. I quickly caught the bug and started buying yarn and patterns with ideas in mind, stocking up on supplies much faster than I had time to knit through them. The summer after senior year of high school, I knitted a hue shift afghan that was the biggest thing I had finished yet. Completing that project cemented my passion for making things out of yarn.

When I left for college in Fall 2017, I brought my yarn and needles and got to work. I taught myself how to crochet freshman year too, expanding my repertoire, and practiced basic colorwork as I knitted hats for my brothers’ birthdays.

The following spring, I took Professor Allison Dorsey’s and local artist Alicia Nock’s course on the history of quilting as an African-American art form, and absolutely fell in love with quilting. I carried that with me over the summer, where I made two T-shirt quilts, one for my sister and one for myself. My lines were a little wonky, and it was slow going, but the work got me out of my head. I was working at a congressional campaign and my days were incredibly stressful, but when I got home I could sit down at my mom’s dining room table and cut up a dozen old shirts, transforming them from closet clutter into something useful and alive.

Sophomore year I kept knitting and crocheting, experimenting with festival-style crocheted tops and colorwork hats. I also got into cross stitching, which might be the most soothing of all the fiber arts I practice. It’s basically pixel art with needle and thread: you form hundreds or thousands of tiny Xes with different shades of thread, eventually forming a picture that can be as detailed as a photograph.

I first learned the basic technique on a kit that I found at Michaels, with all of my thread pre-cut and the pattern included, but as I got a feel for it, I started developing my own designs. In the summer after sophomore year, I cross-stitched a denim jacket for my younger sister.

In really difficult times at Swarthmore, I put on a podcast and settle down on my bed to stitch. It’s almost purely muscle memory, requiring only the occasional glance at a colorwork chart or knitting pattern. Letting my mind turn off is incredibly soothing. It’s not only a way to relax, but a way of marking my personal history. The missed stitches, the mistakes, the small changes that make projects unique are all reflections of where I was in my life, and what I was learning. And as I learned in the quilting class I took at Swarthmore, these techniques are the legacy of generations of artists before us, developed in markedly different circumstances.

When I went abroad, I brought my art supplies with me and learned some basic embroidery skills, wandering around in search of fabric but not sure which words would get me what I needed. I ended up buying a roll of awning material before finding good cloth to stitch on. I chronicled my time in Granada with an embroidery piece, letting the mistakes and rough stitches speak for all the growing I had done abroad.

When I came back to Swarthmore in spring 2020, I began a cross stitch for my best friend. When I was packing for spring break, I debated bringing it with me: would it take attention away from the scarf I was trying to finish for my brother’s birthday? I decided to leave it in my desk drawer, along with all of my knitting needles, the special scissors my beading teacher had given me, and all of my embroidery floss.

I thought about that decision all the time over the course of the next few months. Leaving for spring break, I knew that there was a good chance we wouldn’t be coming back to school, enough that I packed all of my important documents and textbooks. I missed my art supplies much more than I had ever anticipated, and I missed the cross stitch that was lying nearly finished in my desk drawer. With the cloud of stress and fear that was hanging over my head and over my family, all I wanted to do was make things.

Like most sewers across the world, I spent a good portion of time at home making masks, but other crafts were what helped keep me sane throughout the lockdown. With my mom’s help, I went through all of our closets and consolidated old clothes and sheets that could be torn up. I pieced a quilt in the style of Chawne Kimber out of my family’s too-small jeans, backing it with one of my brother’s ripped sheets and making batting out of our old socks. I used the project to learn how to quilt by hand and found it to be incredibly meditative: the weight of the heavy denim, the slow passage of the thread through the layers.

I learned how to knit mittens and practiced more colorwork, knitting on a set of needles I had left at home with old yarn. I picked a simple Norwegian pattern, thinking about my family’s Scandinavian roots. I made my sister a cross stitch to hang on her wall for her first year of college, stitching a scene from Tuscany in Italy, where my father’s mother is from. I started to piece a full-size quilt out of my family’s old clothes, cutting around holes in knees and splitting open seams to improvise fabric.

I struggled during isolation, and I’m still laboring under the stress of the pandemic (along with the stress of everything else that’s going on right now). In those struggles I found the most amount of peace in rituals: the subsistence rituals of home, baking and making food, and creating art. Crafting was incredibly important to me throughout this time, and I am so grateful to these practices every day during this semester. Some of my happiest moments since returning to campus have been out on the lawn in the sun, on the quilt that I stitched for myself the summer after freshman year.

When I unpacked my boxes on September 1 and found the tools that had been sitting there since March, I almost cried at being reunited with them. Whenever I have a minute between studying, working and sleeping, I pick up the cross stitch that I’m making for my best friend and put in a few more stitches. The pattern depicts fireflies in a dark forest. We picked it together because she liked how soothing it looked, exactly the sort of thing you would want hanging in your dorm room to keep the stress at bay. It’s an eight inch diameter circle, and it’s made up of around ten thousand stitches. Putting each stitch down seems to go so slowly that it seems absurd I could ever finish anything, but it grows much faster than one might think. It’s a reminder to not feel overwhelmed by the dimensions of things, a reminder that it’s all just one stitch at a time.

One thought on “One Stitch at a Time”