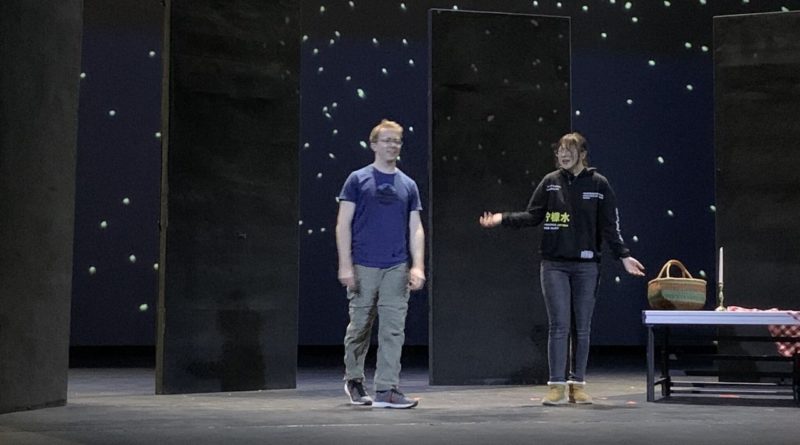 The annual One Act Festival kicked off in LPAC mainstage on Friday, with a matinée the following afternoon and a final performance Saturday night. The festival consisted of three original half-hour plays, all written, directed, produced, and acted by students. The show offered a wide breadth of themes, performance methods, and atmosphere, an unexpected variety that kept the audience guessing what’s next throughout the twists and turns of the different plays.

The festival began with the house lights dimming to reveal the set for “The Dugout,” written by Camryn Slosky ’22 and directed by Jake Chanenson ’21. A few vertical panels each illustrated with a painting of a fir tree surrounded the stage, arranged in a semicircle to frame the central summer camp baseball field location of the play. The evidently hand-painted images subtly evoked a familiar childhood feeling, a memory of classroom decorations and finger painting. This vague nostalgia was dominant throughout the play, which centered on a love triangle between three camp counselors played by Rook Mogavero ’20, Powell Sheagren ’22, and Victoria Song ’23. Through their gleefully caricature-esque performances which intentionally lacked subtlety, the actors effectively conveyed that same recognizable childish simplicity for the duration of the play. The show was not just camp — it genuinely felt like it. Watching the characters, all woefully lacking self-awareness, bumble along in their awkward interactions was akin to the feeling of putting on wet socks after a dip in the creek, the experience of getting stung by poison ivy, or any other such summer camp disaster. It was at times difficult to watch egotistical Dylan (Sheagren) sleazily talking up new counselor Georgia (Song), nor to look on as fellow counselor Brenda (Mogavero) languished in sad mediocrity, only feeling control and superiority from the subordination of the campers under her control. Child characters were entirely absent from the stage in this play about summer camp — but it didn’t feel that way. The counselors were in effect the children, behaving just as impulsively and wildly as did the children they were alluding to throughout the play. Conveying that childlike behavior through the lens of distinctly adult pastimes like sex and drugs is the success of this play.

Continuing briskly onto the second play, stagehands removed the previous set in favor of three music stands arranged in a line and one off to the side. Following a last-minute actor switch, “Serialized Fiction” (written by Nooria Ahmed ’22 and directed by AV Lee-A-Yong ’21) was presented as an abridged stage reading (with only the first half of the script). Actors Lucas Dyke ’20, Robert Gunn ’20, and Lauryn Smith ’21 faced the audience to read their lines, flanked by producer Jack McManus ’21 reading stage directions. The holy grail of this play is its script, which is always three steps ahead of the audience. It operates on several layers and in many dimensions simultaneously, proceeding not just horizontally (both forward and backward) across the x-axis of time but also laterally across the y-axis of meta-levels of storytelling in this narrative within a narrative. The play begins with the dissatisfied amateur writer Movi (Dyke) working on a story, a thinly-veiled personal fantasy. Through the triumphant righteous struggle of Protagonist McHeroington (Smith) against Boss McEvilington III (Gunn), Movi’s story reveals the writer’s resentment for his stagnant career. Even just in this short opening scene, writer Ahmed demonstrates their ability to elegantly weave together multiple levels of narrative in non-linear ways in order to subtly convey information about each respective narrative. The narrative levels in Ahmed’s play are not isolated or confined to their domain — on the contrary, they repeatedly connect with each other across their separate planes, constantly cross-referencing and foreshadowing in ways that bring out more from each level. The subsequent plot, a bizarre narrative in which an aspiring writer is assigned a job as a murderer on their 18th birthday by an all-knowing job-assigning AI, eventually reconnects with the opening narrative in a way that upends which one was perceived as the overarching narrative and which one is the inner narrative. The lack of a set or stage blocking certainly provided a challenge to the actors, but their skills and expressiveness more than made up for the limited situation. Furthermore, this particular play is well suited for such a mode of presentation because it adds yet another level of meta-narrative. For the audience that hears the stage directions aloud, Ahmed too becomes a character in this play about writers, expanding the dimensional scope of the play into the real world, and making fluid the connection between players and audience. “Serialized Fiction” is a journey into an M.C. Escher painting, a comedic fugue on narrative and writing in which the playwright (the real one) guides the audience deftly through every realm and dimension. It is a triumph, a brilliant subversion of the tired “play within a play” formula, and a work that deserves to be shown again at Swarthmore in full regalia and with its full hour-long intended script.

The third play kicked off after a brief intermission, the opening scene that quickly turned aggressive and then somber. “Bearer of Bad News” (written by Alex Kingsley ’20 and directed by Nooria Ahmed ’22) maintains this melancholy mood throughout its runtime, an energy that works to accentuate its poignant and fleeting moments of humanity. The play follows three surrogates (played by Grace Griego ’22, Marie Inniss ’23, and Jill Sekera ’22) pregnant with farm animals at the behest of a vague scarcity-scorched government seeking to bring the animals back from the brink of extinction. The moral and dramatic yoke of the show is pulled by the support group meetings that the three surrogates attend, throughout which they each gradually develop a complex relationship with their pregnancy. Becca’s (Inniss) reclamation of the word “bearer” as a personal title in the face of slur abuse from the public telegraphed powerfully across the theater, as did Quinn’s (Griego) harrowing retelling of her delivery experience. Leading up to the final climactic scenes of Samantha’s (Sekera) delivery, Kingsley’s script pulls no punches in laying bare the abuse suffered by the bearers at the hand of their tormentive doctors. Samantha’s yearning for humanity as she intimately takes ownership of her pregnancy clashes with her brutish and dispassionate doctors to great effect. “Bearer of Bad News” is a sobering and timely allegory of medical abuse of pregnant women, made all the more immediate and necessary in a time when women, especially Black women, are subjected to maltreatment in maternity wards across the country, trauma that has led to a maternal mortality rate that horrifically is 2 to 6 times higher than that of white women.

The three plays, though differing between them greatly in theme, content, and mood, all provided a similarly high level of professionalism and thoughtfulness in acting, directing, and writing. Those who unfortunately missed the performance will at least hopefully be able to see the full version of “Serialized Fiction” at some point in the coming months.