Sports » The Re-alliance of American Football 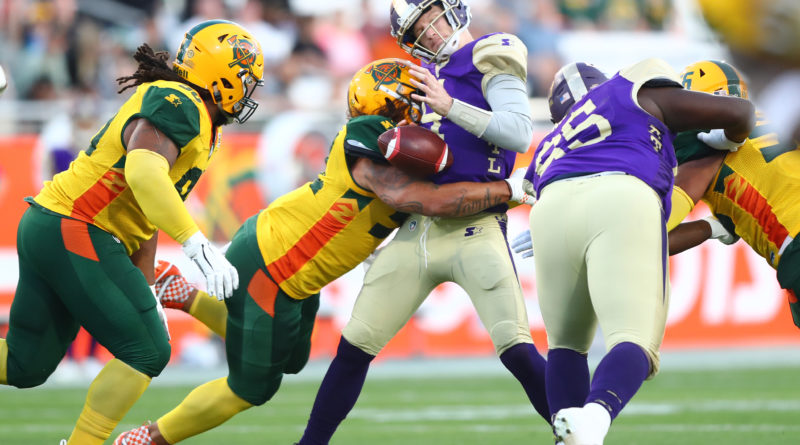 Denard Robinson, Christian Hackenberg, Zach Mettenberger, Aaron Murray, and Trent Richardson were names that once struck fear in the hearts of their opponents on college football fields. The star quarterbacks produced two NCAA national championships, perennial conference championships, numerous FBS season records, and high draft selections. All were highly touted NFL recruits with the potential to continue their success after careers at elite and well-respected football schools. Yet Robinson failed to convert to a premier running back with the deep Jacksonville Jaguars backfield, Richardson started for the Cleveland Browns and Indianapolis Colts mustering only 3.3 yards per carry, Mettenberger and Murray played exclusively as backups, and Hackenberg never even played a regular season game. Their names were soon forgotten, and they quickly fell from the public eye. With them are a plethora of other NFL busts with recognizable names like Matt Asiata, Zac Stacy, and Nick Novak.

This ragtag hodgepodge of former Division I college stars looking to make a name for themselves professionally, NFL players hoping for a final send off, lifelong football journeymen, and hungry young talent have become the makeup of an up and coming professional spring football league: the Alliance of American Football. The controversial startup has given new life to many player’s careers, both young and old, hoping to showcase some of this talent by taking advantage of the spring lull of the NFL’s offseason. Offering standard contracts of non-guaranteed 250,000 dollars over three years provides a modest compensation with the precedent expectation that some players may leave to pursue the NFL once again. In this regard, many have dubbed the league “the NFL’s development league.” It would undoubtedly be different from the MLB’s minor leagues or the NBA’s G-League due to its independence from the NFL, but would produce the same talent and feeder system that the higher professional leagues enjoy.

Despite starting its inaugural season just a few weeks ago after the Super Bowl, however, the league has already faced numerous controversies. Before even coaching a game, well-respected former NFL coach Brad Childress stepped down from the Atlanta Legends with numerous eventually disproven reports that Michael Vick was leaving with him. Then, the league received 250 million dollars in emergency funding as a last ditch effort to be able pay its first payroll. This led many players and fans alike questioning the league’s sustainability and leadership.

And the legacies of predecessors to the AAF as professional leagues under the NFL do not exactly instill confidence in these constituents. The AAF will have a lot to prove, more as a business than as a sports league. The Arena Football League’s attendance has been in decline and further shrank this past season from nineteen active teams at its peak to just six. The United Football League of the late 2000s only lasted four fall seasons before finally succumbing to its steep financial burden. And the US Football League only managed five spring seasons in the 1980s with arguably better talent in the form of Herschel Walker and Doug Flutie before it collapsed as well. All of the leagues possessed undeniable talent, but could not draw the viewership and attendance numbers necessary to justify further revenue in the form of sponsorships, TV deals, advertisements, etc. The finances associated with competing with the NFL simply proved too great.

The league and its co-founders, Charlie Ebersol and former NFL coach Bill Polian, argue though that a competitive professional league has never filled the same niche that the AAF has found. For one, the AAF and USFL were the only leagues that do not compete with the NFL for time and fans, because they are not in the same season. AAF teams are intentionally based in smaller market cities without NFL teams that still express a strong love of the game — think Birmingham, Alabama. The AAF further distances itself from the defunct USFL by claiming that its different business model, based on limited player contracts and aggressive TV viewership pushes will sustain fans, and thus, money. In this effort, the league already broadcasts its games on CBS, a national channel used by the NFL as well and began a strong social media campaign. Likewise, the league has certainly taken advantage of the new legality of gambling in certain states, pushing for off the field incentives for viewership.

It is no surprise, then, that one of the league’s investors also has major stakes in gambling proponent and media hub Barstool Sports. Barstool has recently been vocally critical of the NFL for its excessive regulation and oversight of the game, which non-coincidentally has been occurring in tandem with the league’s initiation. Plus, for better or worse, NFL ratings are plummeting as well, in part because of increased outrage with new rules targeted at player safety and the controversy around the league’s stance against protesting the national anthem. This could signal a decline in American interest in football as a sport in general, or a potential demand for a league with more lenient supervision. Instagram and Twitter have already been flooded with videos of the AAF’s vicious hits that are no longer allowed in the NFL, on top of the many other highlights that football fans have come to enjoy.  This development could rekindle the contentious topic of player safety that is going on in all sports. Furthermore, the AAF differentiates itself on the field in its aforementioned hands-off approach with the game on the field and other rule changes, including a lack of kickoffs and different restrictions on how teams handle contractually “protected” players.

In any case, the controversial league certainly benefits down-and-out players and is attempting to rekindle the love of the game in America. Viewership has decreased after just the first couple of weeks and the financial strains have certainly been evident early on, but the league remains hopeful that it can become a mainstay in the spring season. It will attempt to fill a new role as a gambler’s paradise, a developmental league for the NFL, and an upstart for football talents past, present, and future. The NFL is a multinational corporation, and the AAF is a start-up trying to find its way. It is yet to be determined the league’s legacy after the early bumps in the road, but it will be interesting to see how well it can sustain its early hype in the years to come.

2 thoughts on “The Re-alliance of American Football”