Arts » Darkness and Light Resound in “The Pillowman” 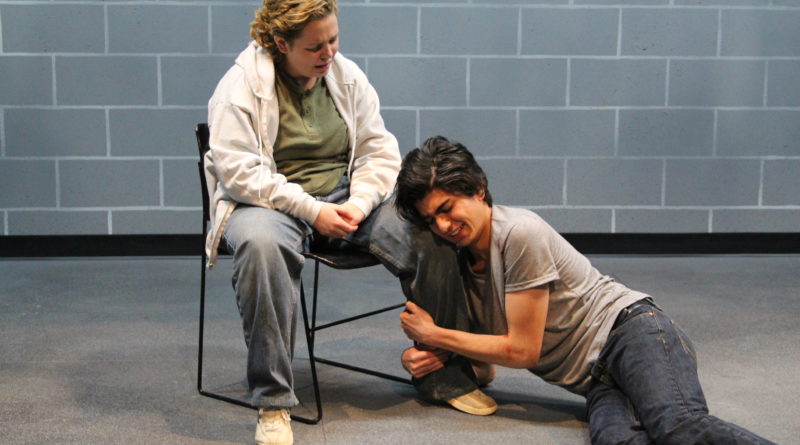 At 2:00 p.m. on Sunday, December 2, the Frear Ensemble Theater in LPAC transformed from a generally unassuming room to a claustrophobic police questioning room in some all-too-near authoritarian dictatorship. As a high-pitched, gritty sound played over the speakers in the theater, the lights flickered to reveal two police officers, and our protagonist, Katurian Katurian Katurian, in a blindfold. In that moment, the modestly-sized audience in the theater were ejected from the colorful, upbeat arboretum that composes Swarthmore’s campus. Now, for roughly the next two hours and forty minutes, we were in the inescapable world of “The Pillowman.”

“The Pillowman,” first performed in 2003, was written by Irish playwright Martin McDonagh. The black comedy went on to win two Tony awards, two Drama Desk awards, and one Outer Critics Circle awards. The play, directed by John Wojciehowski ’19, revolves around a writer, Katurian K. Katurian (Rohan Hejmadi ’21), who hails from a troubled childhood and who has written a number of psychologically-scarring stories, some of which include obscenely gruesome deaths of children. The title, “The Pillowman,” refers to one of Katurian’s stories, about a man made of pillows who travels in time to help children who would later grow into suicidal adults, take their own lives preemptively. Plot-wise, after being apprehended by two policemen, Tupolski (Max Marckel ’19) and Ariel (Arijit Nerurkar ’19), Katurian learns that there had been a recent string of murders of children, all of which followed one of his gruesome stories. For example, the police had found a little girl who had died after she had swallowed razor blades, and one of Katurian’s stories had involved a little girl dying after being forced to eat apple-men with razor blades embedded in them. As the play unfolds in the minimalistic theater, we slowly uncovered the past trauma of Katurian, Michal (Josephine Ross ’21), his little brother who has a learning disability due to the past actions of their parents (Gwen Gilfond ’22 and Amaechi Abuah ’21) Tupolski, and Ariel. As their outer affections disintegrated away, the rawness of their interactions pushed the story to a bittersweet, but fitting, conclusion.

“The Pillowman” is unique in that it is an utterly minimalistic play. The entire play took place in one of two settings, a police questioning room and a holding cell. Both were identical except for slight changes in furniture and a panel in the wall that reversed. The Frear Ensemble Theater was set up in a way that the stage was unavoidably close to the viewers, and at one point, the character of “Girl” (Youogo Kamgaing ’22) reached out to touch the hands of the people sitting in the front row. Kamgaing commented, “Especially when the set became what it was I was so shocked… People who sat in the front row got to see… the person getting tortured,” which “was jarring and stuck to their attention.”

Furthermore, out of the seven characters in the play, only four were named and had any sort of substantive dialogue. When asked about how the minimalism of the play drives the plot, Kamgaing said, “It’s a difficult play to process in the end with just the four characters, so the fact that there’s not that many characters allows people to focus a lot more on the story.” It’s true. Even with four named characters, the punchy, dialogue-driven play required attention to keep up with as it continually took the audience through a series of unanticipated plot twists and deeper into the characters’ minds.

What also makes “The Pillowman” stand out among other plays is the darkness of the story. In fact, before the show, the house staff of LPAC handed out two documents to the audience: the program for the show, and a list of content warnings. These warnings, among others, included child abuse, murder, mentions of dismemberment, blood, and the firing of a gun with blanks. The play is not only dark on a superficial level involving violence, but is also psychologically scarring in the way that the characters’ demeanors slowly crumble away. Every character manages to become or remain sympathetic even as we learn about their gruesome pasts. When we meet Katurian, we see him as a strong, confident writer who has a healthy relationship with his younger brother. It is only gradually that we learn that he is, in fact, a three-time murderer whose parents psychologically abused him throughout his entire childhood. Similarly, the detective Tupolski is the most straightforward and unsympathetic character in the play, but our preconceived notions about his outward brutality are questioned when we learned that he liked Katurian’s “Pillowman” story because it gave him comfort about the fact that his own son had drowned.

I had never seen a play like “The Pillowman” before, and I doubt that I ever will again. When I exited the Frear Ensemble Theater, I couldn’t stop thinking about the implications of the story, and even now, three days later, the story of Katurian, Michal, Tupolski, and Ariel has stayed with me. While the word that best describes “The Pillowman” is, of course, “dark,” the story doesn’t stop at that “dark”. The play is also funny, witty, and even touching at the rare times when the characters are tender to each other. Of course, this often took place in the form of convoluted acts of kindness, but these acts remained meaningful nonetheless. Ultimately, “The Pillowman” is a story about the darkness that emerges when people’s pasts are revealed to each other, but it is even more a story about the light that sometimes breaks through that darkness and brings people closer together.

Images courtesy of Emma Ricci-De Lucca for The Phoenix

3 thoughts on “Darkness and Light Resound in “The Pillowman””