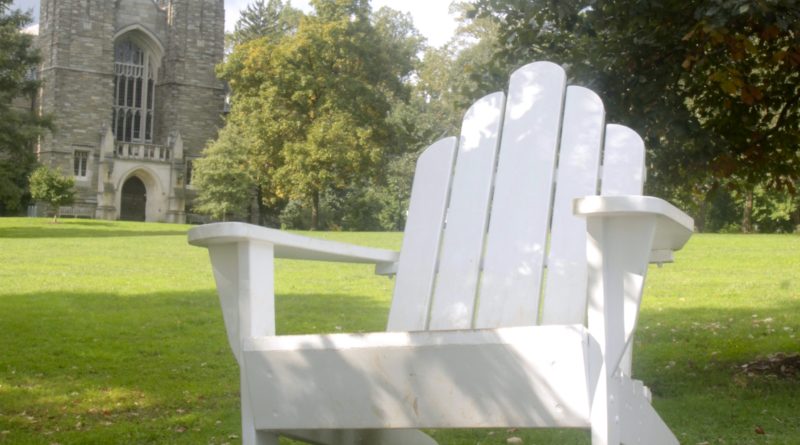 Swat Ed is the Phoenix’s biweekly sex education Q & A. We accept all questions and they are kept completely anonymous. If you’re looking for medical advice or a diagnosis for that weird thing on your genitals, get in touch with a medical professional! For everything else, email swatedquestions@gmail.com. Today’s subject matter includes a breakdown of a well-documented campus legend and a discussion of faking orgasms.

I heard this weekend that there is an undercover movement to resurrect the “Lost One” through a ritual called the “SwaTriangle”, which apparently refers to a sex act. What’s the SwaTriangle?

According to the histories, the  SwaTriangle is not a specific sex act, but a confluence of three campus locations that carry tremendous restorative power detailed in the Prophecy of Three. On the night of a full moon, the Chosen Ones must first visit Crumhenge, then the roof of Kohlberg, and finally the Big Chair. A minimum of one orgasm per person per location is mandatory (which is why a lot of people interpret the prophecy as not involving heterosexual Chosen Ones. Statistically, however, we must acknowledge the Chosen Ones could be anyone). The fact that triangles are continually referenced in the prophecy has also been taken as a sign that feminine power is essential, but scholarly analysis has concluded that is a moot point: feminine power is always essential.

The Prophecy of the SwatTriangle states that upon completion on the Big Chair, the earth will part down by the Matchbox tunnel and the Purple Tree will be born anew. Original interpretations of the prophecy implied that the three locations were in fact McCabe, Cornell and Underhill; however, later scholarly examinations concluded that the interpreters just felt guilty about taking time out of their study schedules. Another dedicated group of thinkers maintains that the Triangle actually refers to the Rose Garden, the bee garden by Sci Center, and the food garden by Sharples. While the Photosynsexis Society remains convinced, the body of work to support this hypothesis is lacking and a growing number of respected theorists believe that they are simply looking for an excuse to ascend to the next level of veganity.

The Prophecy of Three supports the theory that the Purple Tree served as the metaphorical Golden Fleece of Swarthmore, and that the loss of the Tree was felt in such cataclysmic shifts as the changes at Essie Mae’s,  the multiple Swat Plague outbreaks, and the proliferation of moth memes and can’t openers. While some argue that we should not depend on a source of pure good like the Purple Tree to protect us, others believe that we have enough on our plates without having to individually fight the forces of evil. Some community leaders have also argued that the vandalism to the Big Chair represented another attack on an essential source of Swarthmorean power. It will therefore fall to the Chosen Ones, whomever and wherever they may be, to complete the SwaTriangle and raise the Purple Tree to guide us once more.

I’m a straight guy and my girlfriend just told me (after like six months of having sex) that she doesn’t orgasm during sex. I’m pretty upset about it because I legitimately thought she was really enjoying it the whole time but no, she was faking. It’s causing a lot of tension for us right now. How am I supposed to deal with this? I don’t want this to be something we break up over.

This is a tough situation and your sense of betrayal at being lied to is valid. Let’s break this down. Firstly, I want to address your comment that you believed she was really enjoying it. Having an orgasm is not synonymous with enjoyment. It is definitely possible to have a positive and pleasurable sexual experience without having an orgasm. In general, heterosexual male sex culture prioritizes the male orgasm to such a degree that the lack of a male orgasm automatically signals a bad or negative sexual encounter (but it doesn’t, and shouldn’t). Since straight men have this association of not orgasming equals bad sex, hearing that their partner didn’t orgasm can sound synonymous with “I didn’t like it”. As a result, some straight women find it easier to lie and say they orgasmed than tell the truth and deal with their partner’s skepticism over their pleasure. The bottom line is that just because your girlfriend hasn’t been orgasming does not mean she hasn’t been enjoying sex.

To resolve this, you’re going to need hefty amounts of communication. The big question is why your girlfriend felt it was necessary to lie to you and fake her orgasms. I’m going to guess that the main reason is that she didn’t want to embarrass you by admitting your technique wasn’t doing it for her. That opens up two more questions: what is the technique that will do it for her (we’ll come back to this) and how you are going to create a relationship where partners can honestly tell one another when they are enjoying or not enjoying something. Sexual relationships (like other relationships) are built on trust and honesty, and it’s worth taking a moment to examine why the building metaphor is so apt. If you and your girlfriend don’t have an honest understanding of the other’s experience, you won’t be able to get better. If you think she loves vigorous stimulation and she’s in reality profoundly indifferent to it, your sex life will stagnate and eventually fall apart because you one, don’t have a good idea of what she likes and two, because you don’t know you have the wrong idea, you won’t do anything about it. Sexual relationships built on real knowledge do not stagnate; they grow and flourish and get better.

What you need to do right now is emphasize to your girlfriend that your goal during sex is her genuine pleasure. Tell her that you will not take this personally or get upset if she doesn’t orgasm; she does not have to worry about appeasing you with a faked orgasm. Tell her that you would much, much rather hear that she did not orgasm but really enjoyed this or that. Tell her that you want to have experiences with her that you both completely and honestly enjoy.

With regards to how you’ll figure out what does it for her: more communication. Ask her specifically what feels good, and have her talk to you while you are doing it. Keep in mind for most women, clitoral stimulation is necessary to orgasm. That means your focus shouldn’t be so much on intercourse, but on foreplay and oral sex. You shouldn’t show up with the goal of getting her off come hell or high water; your mentality should be that you are simply trying to do what feels the best for her. Sex should not be a high-pressure performance, ever. If you communicate humbly, you can absolutely create a strong, honest foundation for a great sexual relationship.

If you can’t think of a way to bring this up, give her this column. Then listen.