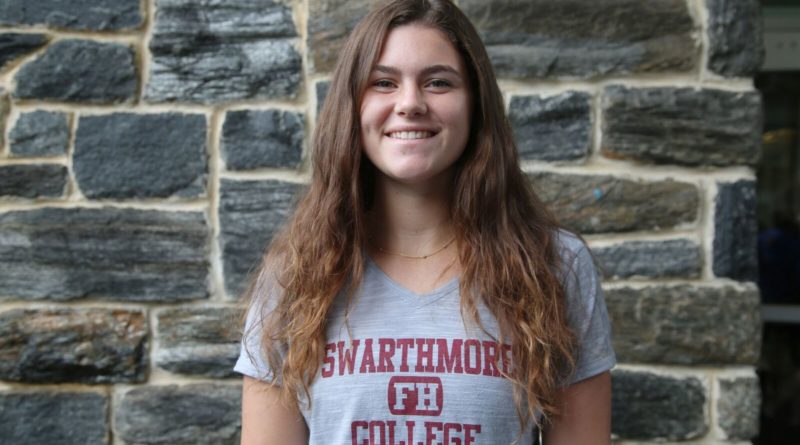 Field hockey is off to a solid start this year. After finishing with a respectable 7-10 record in 2017, The team has opened the 2018 season at 4-4 and is on pace to surpass last season’s win total. The Garnet picked up their first Centennial Conference win of the year on Sept. 22 in a 3-2 overtime thriller versus McDaniel. After Swarthmore took an early 2-0 lead, McDaniel responded with two late goals to send the game into extra time. The Garnet, however, hung on for an important win through a sudden death goal from leading scorer Ali Baratta ՚21. Hailing from Reisterstown, Maryland, Baratta has scored four goals this season, including Saturday’s overtime winner. Her four goals in 2018 eclipse her three goal total from last season and place her as the fifth highest goal scorer in the conference. Baratta and the rest of the Garnet return to action Sept. 26, when they face Neumann in a non-conference game at Clothier Field, and again on Sept. 29, when they play defending conference champions, Franklin and Marshall, in Lancaster, PA.

Max Katz-Balmes: What is your major, and what led you to pursue that area of study?

Ali Baratta: I haven’t officially declared my major yet, but I am planning on majoring in either Chinese or economics. I started studying Chinese in middle school and really want to become fluent by the time I graduate!

MKB: Why did you decide to attend Swarthmore?

AB: When I visited Swat, I stayed with the field hockey team and immediately noticed that everyone I met was so welcoming, well-rounded, and interesting. I wanted to go to a school where I could learn from and be inspired by the people around me, and Swat seemed like just the place.

MKB: When did you begin playing field hockey?

MKB: What is your favorite field hockey memory at Swarthmore?

AB: So far, my favorite memory is when we beat McDaniel last year for the first time in six years, and the seniors had their first ever conference win other than Bryn Mawr. But, I’d like to think that my all time favorite memory is yet to come. I feel really lucky to be a part of a growing team that is constantly working hard to improve. Hopefully, my favorite memory will come around the time when our team is able to prove how much stronger we have become in the past couple of years.

MKB: What are your personal and team goals for the season?

AB: Personally, one of my goals is to score more than one goal in a game, especially a conference game! Our team goal is definitely to move up in the Centennial Conference ranking and beat a couple more conference teams that we lost to last year.

MKB: Talk a little about last week’s overtime victory over McDaniel. How did it feel to score the game winning goal?

AB: When the game came down to sudden death overtime I was motivated to score as soon as possible to end the game how it should, and not have to go to shootouts like last year. We knew McDaniel would be coming out strong after tying the game in the end of the second half, so as a team, we made sure to stay calm, but also play with a high intensity level. Scoring the goal was such a relief and also very rewarding because it immediately ended the game and gave us the win we deserved.

MKB: Speaking of goals, you already have scored more goals this season than all of last season. What has changed in your game?

MKB: Do you have post-graduation plans?

MKB: What is one thing that you would change about Swarthmore?

AB: I do wish that there was a wider variety of food options on campus and in the Ville. Sharples meals can be a little repetitive. I love smoothies so it would be awesome if there was a good smoothie place in walking distance from campus!