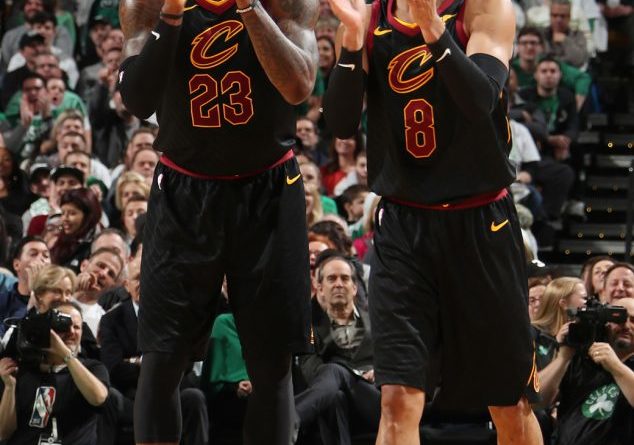 The 2018 NBA trade deadline came and went this past week, and despite being dominated by one team, the deadline certainly lived up to the hype. When the dust settled at the 3 p.m. deadline on Feb. 8, the three-time reigning Eastern Conference champions, the Cleveland Cavaliers, had completely restructured their roster, although little else of significance had taken place across the rest of the NBA.

The trade deadline is a significant moment in the NBA season, when star players are often traded to rival franchises. Traditionally, the deadline falls on the Thursday after the All-Star break, but it was moved forward 10 days this year in order to give players more time to acclimate to their new teams and new cities.

“[There] was the sense that it was more unsettling to have a player traded right after the All-Star break, that the All-Star break would have been an opportunity for the player to move himself, his family, get his family readjusted and get readjusted to the new team when they have that four- or five-day period to do that,” explained NBA Commissioner Adam Silver at the conclusion of the annual NBA Board of Governors meeting.

This year, 12 trades took place on deadline day, with the Cavaliers involved in a quarter of those deals. The Cavs were in desperate need of sweeping roster changes. Despite making the NBA Finals for three years running and despite sitting in third place in the Eastern Conference this year, the team has struggled in recent months. Since Dec. 17, the team’s record sits at a measly 10-12, with two of those wins — and no losses — coming after the trade deadline. The losing spell culminated on Feb. 6, when the team turned a 20-point lead into an 18-point loss against Eastern Conference bottom dwellers, the Orlando Magic. In addition, there have been reports of faked injuries, dissatisfaction with coaches, and a competition of egos among the plethora of star players in the Cleveland locker room.

In order to rebuild and restructure around their star player, LeBron James, the Cavs made three substantial moves on deadline day. These moves turned over 40 percent of the team’s roster on a single day and left the organization with just five players (James, Kevin Love, Tristan Thompson, J.R. Smith, and Kyle Korver) from last year’s Eastern Conference Championship squad. First, the Cavs sent All-Star point guard Isaiah Thomas, who was acquired by Cleveland at the start of the year, role player Channing Frye, and a 2018 first-round pick to the Los Angeles Lakers in exchange for up-and-comers Larry Nance Jr. and Jordan Clarkson. Clarkson, who is averaging 14.5 points, 3 rebounds, and 3.3 assists this season, will provide energy and scoring off the bench, something the Cavs have struggled with this year. Nance, a gifted defender and athlete, will also give depth to Cleveland’s roster.

This trade was the biggest of the day, but hardly surprising given Thomas’ inability to fit in to the Cavs organization. Thomas missed 36 games this year recovering from a hip injury, and after his return, struggled to perform on the court. As a member of the Cavs, he posted a minus-18.5 on/off rating, which measures the difference between a team’s success when a player is on the court and when he is on the bench. In addition, Thomas was at the center of the team’s locker room drama and was perceived by teammates and fans to be cocky, arrogant, and selfish.

One NBA scout said, “Cleveland definitely needed a culture/chemistry change. That team did not like each other.”

The Lakers also benefited from the Thomas deal. By acquiring two expiring contracts and handing Clarkson’s large contract ($26 million owed over the next two seasons) over to Cleveland, the team freed up enough cap space to sign two maximum contract free agents in the offseason. A maximum contract describes the maximum amount of money a player can sign for based on his experience in the league and the salary cap. Max contracts ensure that one player is not being paid more than the rest of his team combined and that teams are more balanced throughout the league. In other words, as a result of the Thomas trade, the Lakers will be able to bring two superstars to Los Angeles this summer.

The Lakers also received a first-round pick in the deal that can be used to add a young role player or prospect to the team’s already youthful core.

The second deal of the day was a three-team trade between the Cavs, the Utah Jazz, and the Sacramento Kings that saw swingman Rodney Hood and veteran point guard George Hill move to the Cavs. In the deal, Cleveland sent small forward Jae Crowder and former MVP point guard Derrick Rose to Utah, while shipping defensive specialist Iman Shumpert to Sacramento along with a 2020 second-round pick.

Like Nance and Clarkson, Hood and Hill will provide immediate upgrades to Cleveland’s roster. Cagey veteran Hill, who has played in 83 career playoff games, will provide the Cavs with experience and solid defending, and will help the team space the floor with his stellar three-point shooting (45.3 percent this year, first among all NBA point guards). Hood will provide the Cavs with a playmaker who can act as a third scoring option behind James and Love.

“He’s a 6-foot-8 2-guard, and that’s just not normal. He’s a lefty, so he’s unorthodox. He’s hard to guard. He can move his feet, can defend. We found out a kid with that much talent was on the market, and we wanted to explore it.”

The Cavs’ final move of the day was a sentimental deal that saw 12-time All-Star Dwyane Wade return to the Miami Heat, the organization with which he spent 13 seasons and won three NBA Championships, in exchange for a second-round pick. Wade, a hero in South Beach, was interested in a larger role than the one he had in Cleveland.

Overall, Cleveland successfully maneuvered the trade deadline. The organization added three 25-year-olds (Hood, Clarkson, and Nance) to add energy and youth to the team, acquired an experienced, skilled player in Hill, and got rid of aging stars and competing personalities in Rose, Wade, and Thomas. In Cleveland’s first game with all of its new pieces, the team blew out then Eastern Conference leaders the Boston Celtics 121-99, while looking far more cohesive, energetic, and happy.

Cleveland head coach Tyron Lue described his team’s changed attitude during the Boston game. He stated, “I thought our spirit was different. I didn’t know what the outcome would be. But I knew we would compete and play hard. Move the basketball and move bodies. Those guys are flying around and it was good to see.”

The Cavs’ acquisitions do come with some financial drawbacks. Cleveland will inherit Hill and Clarkson’s large, guaranteed contracts, meaning that the organization’s already-exorbitant payroll will be bumped further above the salary cap. As a result, the Cavs could owe the league in excess of $50 million in luxury tax penalties this summer. The NBA’s luxury tax rules require NBA teams to pay the league a penalty greater than a dollar for every dollar by which their payroll exceeds the salary cap. The intent of this rule is to prevent teams in major markets with high incomes from signing all of the league’s best players and to keep the league competitive.

In addition, if the Cavs continue to struggle this season, James, who will be a free agent in the summer, may decide to move on to a host of suitors willing to offer him a max contract, such as the Lakers.

Ultimately, however, the Cleveland Cavaliers won on deadline day. The aging team became younger, more unselfish, and more of a complete team. Before the deadline, many NBA analysts and fans had written off the Cavs as serious NBA Finals contenders. But now, the organization looks back on track to win its fourth consecutive Eastern Conference crown and potentially even challenge the defending NBA Champions, the Golden State Warriors, and the Houston Rockets for the title of NBA Champions.