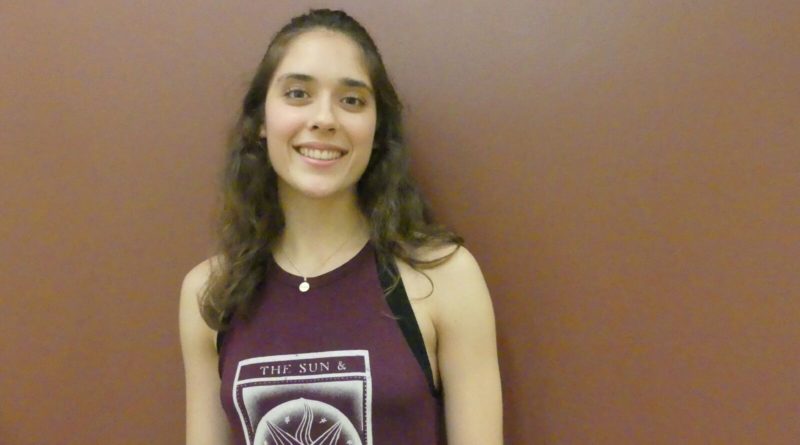 Volleyball standout Mehra den Braven ’20 has thrived so far in her second year on the team. An outside hitter hailing from Santa Clara, Calif., den Braven has captured All-Tournament honors for the second straight weekend, as the Garnet have extended their record to 13-5 overall and remain undefeated at home. Den Braven has 218 points recorded throughout the season so far, with highs of 27 digs against Stockton University and 17 kills against Eastern University. The Garnet return to action Oct. 12 with an away match against Rowan University, and again on Oct. 14 in a rematch of last season’s Centennial Conference Championship at Johns Hopkins.

Ping Promrat: What is your intended major, and what motivated you to pursue it?

Mehra den Braven: I don’t know my intended major for sure, as I’m still trying to find my niche. Right now, it looks like it will be political science and economics, and maybe sociology or peace and conflict studies mixed in there.

PP: What got you into volleyball as a kid? How did you find out about volleyball at Swat?

MDB: My parents forced me to go these club tryouts. I got on the best team because I was tall, not because I was good! However, that’s really where I fell in love with the game, as I was surrounded by players who were much better than me. I was recruited by Swat over a two-year process, as I met Cecily Scavicchio [the old assistant coach] at an academic camp. As I got to know her and Harleigh Chwastyk [the head coach] is when I started to fall in love with Swarthmore

PP: What is your favorite part of being a student athlete?

MDB: My favorite part is the connections you make as a team. It made the transition to college for me so much easier, as I had many friends who struggled with that. I can always text anyone to meet up for lunch, and all the girls on the team make life so much more enjoyable!

PP: You were named to the All-Tournament Team at the Garnet Quad Tournament last weekend for the second weekend in a row. What is it like to have that type of personal success as a sophomore?

MDB: I always want to be better, so the ideal would be MVP of the tournament! However, I never expect any awards or anything, so I just focus on playing my game. At the same time, it is a balance between appreciating where you are and wanting to get better.

PP: Have you been participating in the kneeling protest during the national anthem? If so, what inspires you to take part in it?

MDB: I have been participating in the kneeling protest and showing solidarity. I’ve been so inspired by Lelosa [Aimufua ‘20] and Emma [Morgan-Bennett ‘20]’s motivation and strength in pursuing this, and how they’ve really thought about why they’re doing what they’re doing. However, it is really complicated still even within the team. Some people see the kneeling as disrespectful to our military, but for others, the kneeling is not meant to have that effect at all. I just hope people understand that at the end of the day, it is a peaceful protest that is focused on bringing attention to certain issues in our country that have been neglected.

PP: What are your athletic goals for the team, and yourself for the rest of the season?

MDB: The broadest goal for us would be winning the Conference Championships, especially after coming so close against Johns Hopkins last year. I want us to show a little more strength, swagger, and fierceness, and if we can keep building towards that, the success will continue to come.