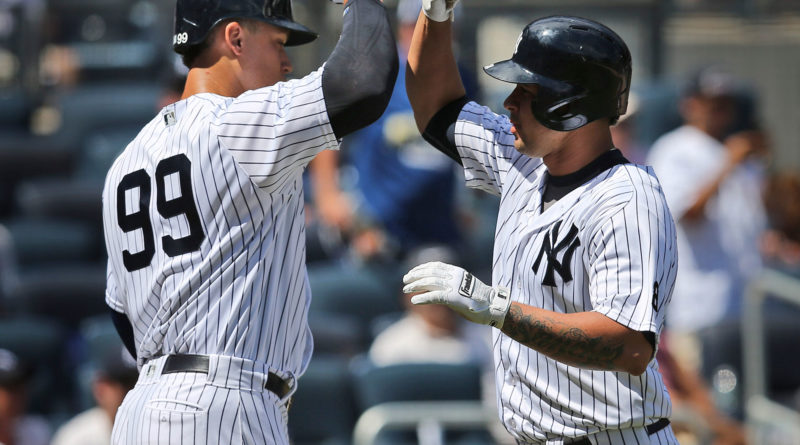 As we get closer to the end of the Major League Baseball season, each game has gained increasing significance, leaving fans on the edge of their seats as they await the outcome of their team’s playoff aspirations. While, at this point, many teams have already had their World Series dreams dashed, others had them decided over the past week. So, without further ado, here’s a recap of the most important scores from the past week:

New York Yankees 5, Toronto Blue Jays 1 – On September 23rd, the Yankees (86-68) clinched an American League (AL) Wild Card spot, giving them the opportunity to play the other Wild Card team in a one-game contest for the right to face the first-seeded team. With young stars like home-run sensation Aaron Judge and catcher Gary Sanchez, New York has embraced the future. A hot hitting streak could be all it takes to spark a lengthy playoff run and the team’s first World Series win since 2009. Following the loss, the Blue Jays (72-83) were eliminated from playoff contention- left to wonder what happened to the team who had just made the AL Championship Series both seasons prior.

Boston Red Sox 9, Baltimore Orioles 0 – We go from the Yankees to their archrival Red Sox (88-64), who clinched their AL playoff spot two days prior, on September 21st, in a straight-up pummeling of the Baltimore Orioles (73-80). Barring an unforeseen collapse, the Red Sox will most likely capture their third division championship in five years (Side note: oddly enough, the only years they didn’t win, they came in last place). Behind the pitching triumvirate of Drew Pomeranz, Chris Sale, and David Price, the Red Sox will be looking to try to repeat their 2013 World Series run. For the Orioles, like the Blue Jays, it’ll be another offseason wondering how things regressed.

Los Angeles Dodgers 4, San Francisco Giants 2 – On September 22nd, the Dodgers (98-56) finally secured the National League (NL) West Division championship, finally bringing a bright spot to what has been a grueling second half of the season. Standing tall at 91-36 at the end of August, the team had gone on a 5-20 skid, including multiple losses to the rebuilding Philadelphia Phillies and San Diego Padres. They’ll be looking to right the ship and reestablish their dominance just in time for the playoffs. For the Giants, it’ll be another down year in a pattern where they’ve made the playoffs every other season, but their recent success (winning 3 World Series in the last 8 years) certainly helps satiate the disappointment.

With 5 or 6 games left to go for most teams, the playoff picture is nearly complete, but for a select few, there’s still glory to be had – or lost. The Minnesota Twins (82-74) currently lead the race for the second AL Wild Card spot, but the Los Angeles Angels, Texas Rangers, and Kansas City Royals still have a chance. For the NL West, while the Arizona Diamondbacks have powered their way to a comfortable lead for the first Wild Card spot, the race for the second spot has become an all-out brawl between the Colorado Rockies, Milwaukee Brewers, and St. Louis Cardinals – every team within 3 games of each other. How will the final playoff picture shape up to be, and more importantly – who will win the World Series? There’s only one way to find out: sit back and enjoy some good ol’ fall baseball!