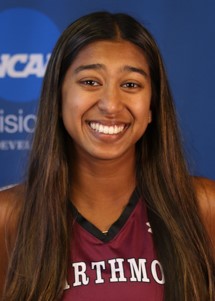 Field hockey player and Westlake Village, CA native Riya Garg has lead the team to a fantastic start in the 2017 season. Coming off of a stellar 2016 season in which she started every game she played, Garg has already registered two assists and a goal in the first three games of the year. The Garnet return to action on Sept. 13 with a home game against Dickinson College.
Ping Promrat: What is your major, and what inspired you to pursue it?
Riya Garg: I am a math major and a computer science minor. Math had always been my favorite subject in school, and that made declaring the major easy! After this semester, I potentially could be done with the math major, which is really exciting.
PP: What is your favorite part of being a student athlete?
RG: My favorite part is definitely having a team on the field and off the field. Whether we are studying, taking classes together, or practicing and playing together, our field hockey team has really become a family for me in my time at Swarthmore.
PP: The team welcomed new head coach Hannah Allison this year. What has it been like adjusting to a new coach, and what has she brought to the program?
RG: We all really love her, and having her here is great for our program. She is a relatively young coach, which is really refreshing because she can relate to us in a lot of situations. Something specific that I really love about her is that she will sometimes let us play music at practice. It’s a little thing, but we get to show her our music, and she’ll add songs to the queue, too. I think it really is representative of our relationship with her: she is our coach, but also someone who wants to know us off the field too, music taste and all!
PP: The team is currently 3-1 to start off the season. How do you plan to keep up the momentum as the team heads into conference play?
RG: Our big goal for this season is to play our game and set the tone no matter what. Ultimately, we want to be in control of our destiny this year, no matter who we play.