News » Around Campus » Students to march on Washington for climate justice 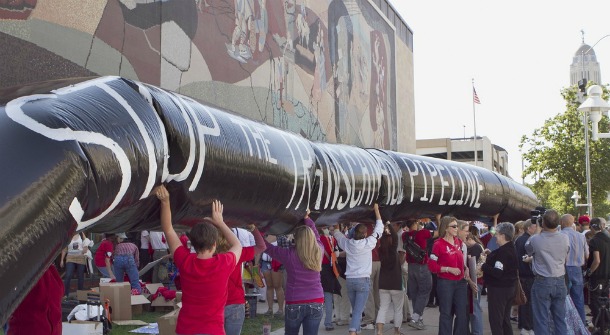 On April 29th, Swarthmore students will be marching around the White House, along with thousands of other protesters, for the People’s Climate March in Washington D.C. Although the march is a national event, Mountain Justice, Green Advisors, and the Sustainability Office are working together to send three buses of students to the march and a student convergence the day before.
Indiana Reid-Shaw ’17 was part of a group of students who worked to send students and staff from Swarthmore to the first People’s Climate March in New York City in Sept. 2014. By coordinating with the larger 350 movement, an environmental organization, and getting funding from various departments at the college, the group was able to send 200 students and staff to the march.
“The first PCM was a huge success, and therefore we are using the same tactics to garner interest,” Reid-Shaw said.
These tactics include advertising on dorm halls, sharing slides with professors, and running an interest meeting along with Mountain Justice. September Sky Porras ’20, a member of Mountain Justice, headed this interest meeting and is leading the effort to bring people to the march this year. Porras believes that, despite negative rhetoric about protests, the march is an important occurrence.
“I think that the People’s Climate March is super important right now. I also know there’s a lot of discourse about whether protests are effective or not. For me personally, I think that protests even though they’re made up mostly of people who are already engaged. First off it lets people feel like they’re doing something and being part of something, and second, leads them to engage with other organizations, … so it’s definitely teaching people how to be leaders in their communities and how to elect people who are good for climate justice. And then of course third, everybody who’s in D.C. at the time is going to see this. So if you don’t think this is a big deal, it’s gonna seem like a very big deal,” Porras said.
The college’s Sustainability Office, while supporting the college’s decision not to divest at odds with Mountain Justice’s recent referendum, is working with Mountain Justice and the GAs in this effort.
“We take seriously our role of serving as a liaison between students and the administration and supporting all student sustainability groups on campus. Thus, we look for opportunities to engage constructively with Mountain Justice, including our collaboration on the upcoming People’s Climate March,” Nathaniel Graf, of the office, said.
Reid-Shaw is also excited about the collaborative effort.
“I am excited about this partnership with Mountain Justice because I get the sense that some people think of these two groups as approaching environmentalism in opposing ways. I think both of our groups’ foci are essential and should work in tandem,” she said.
Along with the march itself, many students will be attending a “student convergence” on Friday, the day before the main event. At this convergence, various organizations such as 350 will be hosting workshops on both climate justice and social justice more generally.
“It’s going to be a bunch of students, we’re going to be taking those workshops, we’re going to be interacting with other students and other student organizations, I know we’re going to be meeting up with a lot of people who have other divestment movements, so that’s going to be a lot of fun,” Porras said.
Although the 80 people who have signed up for the march this year are fewer in number than before, there is excitement about the opportunity to learn at the convergence.
“I was actually really excited to see so many people who aren’t super involved in MJ or the GAs already being excited to go to the student convergence, and I was like woah, that’s really cool, because I don’t know if I wasn’t involved if I would want to put myself out there. So I’m really like wow, that’s really great,” Porras said.
According to Porras, in past years, some of the panelists at the People’s Climate March and convergence have been less than optimal. With the help of Stephen O’Hanlon (year), she looks forward to a more improved experience.
“Apparently … there were a lot of questionable panelists, who were, I don’t know, just very white-centrist ideas … yeah, (this year), it’s not going to be that,” she said.
Reid-Shaw remembers the “contagious energy” at the last march in 2014.
“The energy was contagious at the last PCM in 2014. It was empowering to walk with so many people all with a common interest for climate justice, but for so many different reasons. I talked to a beekeeper, an environmental justice advocate, and an indigenous activist. I remember feeling the power of the people as we marched by Times Square and all of the corporate buildings,” she said.
However, both Reid-Shaw and Porras believe that the new Trump administration makes this 2017 march, which will be held on Trump’s 100th day in office, particularly important.
“I …  think it’s pretty poignant that it’s on [Trump’s] 100th day in office, and we’re going to be marching around the white house very loudly, so yeah I think protests and specifically this protest being so large, and in DC, and on that specific date, it’s just a very very good way to connect channels of people,” Porras said.
Reid-Shaw agreed.
“On April 29th we will march again, but this time in DC and to the White House to demand climate justice for people of color, workers, indigenous people, immigrants, women, LGBTQIA, young people, and more! As the Trump administration and their fossil fuel allies threaten communities and our future, we need to show up in force in DC to demand a renewable economy that works for all,” she said, “Our goals are high.”
The buses to D.C. have the capacity to hold about 150 people, and look to bring a large presence of students to the event.