Arts & Features » We Can Make Pennsylvania a Democracy 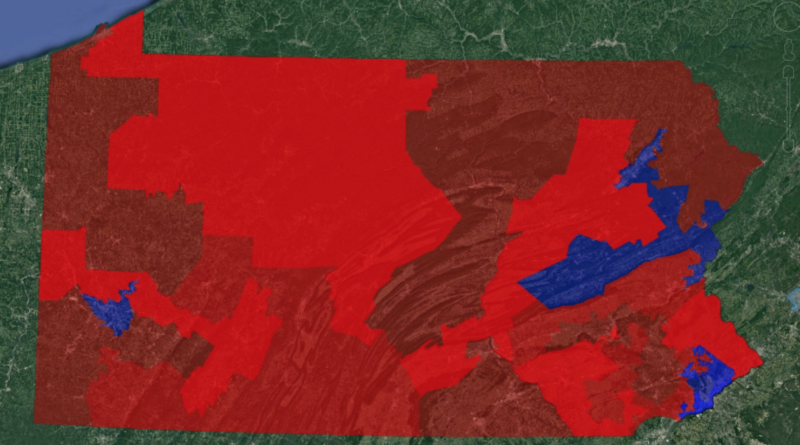 The spectacle of politics made profitable by the corporate media may have led to Donald’s kleptocracy, and as much as national attention is focused towards the federal government, we ought to not let Donald steal our attention away from local politics. It is ludicrous that mere sassy responses to Donald’s tweets can make news while consequential bills in state legislatures barely get any attention. The state-level electoral strategy of Republicans worked and paved the way for a Republican congress, but through undemocratic means. These means are an indication that our democracy is at risk. If “We the People” want our congress back, we must organize locally and start paying attention to Harrisburg.

On January, Fair Districts PA held an open event in Arch Street United Methodist Church in downtown Philadelphia. Approximately 850 people came together to organize and learn more about tackling one of the most important issues that elections in Pennsylvania face: Gerrymandering.

Gerrymandering is the practice of “representatives” choosing their voters instead of voters choosing their representatives. Every ten years congressional districts must be redrawn in response to new census data as mandated by the supreme court. The districts can be drawn in such a way as to include or exclude areas that favor one political party over another. From this, a myriad of problems arose.

While speaking in front of the eager audience, Carol Kuniholm, the co-chair of Fair Districts PA, elaborated: Gerrymandering has made it harder to push incumbents out and has polarized legislators to the extremes of both parties. As a result, people are often discouraged from voting and participating in electoral politics. After a legislator’s ideal congressional district has been carved out, it is extremely hard for challengers to put up a competitive campaign against the incumbent, guaranteeing peace-of-mind to our dear legislators.

“Many of our leaders say: ‘Well, if you don’t like them, vote them out.’ And the question is ‘How? How do we vote them out?’” Expressed Kuniholm.

According to Ballotpedia 91.7% of state legislators ran for reelection in 2016, 86.1% of them faced no primary opposition and 48.7% of them were not even challenged in the general election. It is often the case that there are few or no options for Pennsylvania voters to choose from. For the election of US House of Representatives, 3 of the 18 races in Pennsylvania were uncontested in the general election and only 4 incumbents were challenged during primaries.

The geometry of certain congressional districts also makes it difficult for organizers to target a specific congressional district and allows for legislators to keep electorally influential areas outside or inside their districts. Swarthmore, for example, has been carved out of District 7 in order to pack District 1 with as many democrats as possible.

Bu- But Pennsylvania isn’t doing so badly in contrast to other states… right?

Last year, the article “North Carolina is no longer classified as a democracy” went viral on social media. The article, which analyzed the electoral integrity score of North Carolina, claimed that “for the 2016 election [North Carolina placed] alongside authoritarian states and pseudo-democracies like Cuba, Indonesia and Sierra Leone. If it were a nation state, North Carolina … is only slightly ahead of the failed democracies that constitute much of the developing world.”

Add that to this: According to a study of partisan gerrymandering by researchers at the University of Chicago Law School, Pennsylvania has the least efficient congressional elections in the country. Republicans in Pennsylvania won 11 of 15 (~73.33%) contested House of Representatives seats in the 2016 election despite only receiving about 51.7% of the votes. Can one really call Pennsylvania a democracy when its elections are this unrepresentative?

The state of money in politics is exacerbated through gerrymandering by making elections as uncompetitive as they can be, making it is easier for legislators to filter out the voices of their constituents and instead prioritize the demands of campaign financiers and lobbyists. Aside from this, political power is taken away from groups of people that are packaged into minority groups within a congressional district. The inner urban population of Reading, for example, has been redistricted into the same congressional district as farmers in Lancaster, making them a minority and stripping away their electoral influence.

The gridlock in Congress and in state legislatures also threatens the economy. A survey of Harvard Business School alumni found out that “there is strong support for political reform among surveyed alumni. Of six common proposals for political system reform, a strong majority of HBS alumni support five. The most supported reforms are gerrymandering reform and campaign finance reform.” This was in the context of identifying solutions to economic problems associated with political paralysis.

Gerrymandering has been around since 1812, but the introduction of information technology has deeply exacerbated the problem. With access to voting behaviour data from each household and sophisticated district-drawing software, politicians can now draw incredibly bizarre-looking but politically favorable districts with as much effort as a mouse-click. To understand the effects of technology on gerrymandering, take a look at the evolution of Pennsylvania’s seventh congressional district:

Although redistricting occurred back in 2011, there are numerous legal battles that still remain until this very day. We are in 2017 and many of those cases have not yet been resolved, costing taxpayers millions of dollars.

Fair Districts PA believes that the best way going forward is to pass a state “constitutional amendment  to create an impartial citizens commission” to allow for non-political district mapping and a transparent decision making process. Kuniholm predicts what we can expect for the next decade if nothing is done to address gerrymandering now: millions of outside dollars being poured into Pennsylvania elections, perpetual voter disenfranchisement, more costly legal challenges and a dysfunctional US congress and state legislature.

After Kuniholm finished speaking, she opened the floor for people to ask questions. Afterwards, those in attendance broke into regional groups to organize and find ways in which they could tackle gerrymandering together in their respective regions. It was understood that the stakes of not doing anything are just too high. With three years away from redistricting the urgency to act is now greater than ever.

You may have missed this event but there is still much you can do. We  cannot let Harrisburg gerrymander our voices out of existence.

Join the fight for democracy! Here are some things you can do right now: